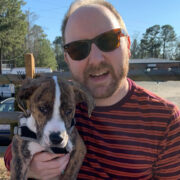 Rusty Roberts
Rusty grew up in a small town in Pennsylvania not unlike the one featured in Mare of Easttown, HBO’s newest hit limited series. All the kids were talking action figures and baseball cards, but he just wanted to chat about his very first cassette tapes: ‘Full Moon Fever’ by Tom Petty, ‘Kick’ by INXS, and ‘OU812’ by Van Halen. Now much older and wiser, he just buys records, bourbons, and hangs with his wife and their two four-legged kids in the Triangle area of North Carolina. (edited)