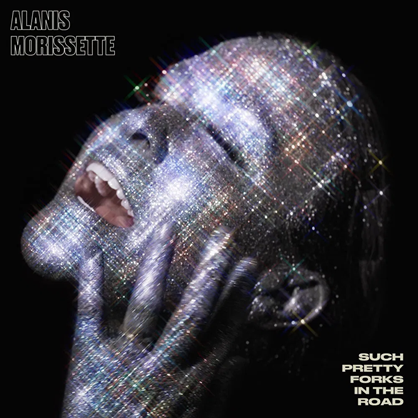 Alanis Morisette – SUCH PRETTY FORKS IN THE ROAD

There were a LOT of moments on SUCH PRETTY FORKS IN THE ROAD that were reminding me of the ballads on Evanescence’s FALLEN, and “harrowing” was never a word I thought I’d attribute to Alanis Morisette’s oeuvre. SUCH PRETTY FORKS IN THE ROAD, her first album in eight years, doesn’t work for a few reasons, the central issue being just how heavy-handed the dark orchestral production is. Her vocals, once a source of strength against big dick-splitting arena rock anthems, are a kind of untamed beast against unbecoming, downtempo instrumentals that lack nuance and feel aggressive in their unwieldiness, her voice wavering and detached from a dramatic, overtly cinematic collection of songs. Everything you need to know about the album rests on opener “Smiling,” and while it’s instantly nostalgic to hear Morisette’s distinct Canadian warble, it’s on a stop-and-start Hot Topic-core 2000s rock song that is a far cry from JAGGED LITTLE PILL’s brilliant post-grunge hookiness. There are songs that certainly attempt to capture some of that pop rock aesthetic, but they’re wildly awkward—“Reasons I Drink” could be a fun Lumineers song but feels overthought and over-the-top in the context of this album, and the U2 hum of “Sandbox Love” suits her own arena rock sentiments much better than most songs on the record, but could again be handled better by a different artist. Highlight “Ablaze” is perhaps as close to vintage ‘90s Morisette as is to be found on this collection of songs, although its ending doesn’t quite explode the way it would have in her prime. “Losing the Plot,” “Reckoning,” “Nemesis,” “Her,” “Pedestal,” swing a dead cat and you’ll find gloomy, slow-moving bummers, each meant to be played to catharsis in arenas with fake digital rain playing on screens behind the band. And for a while I could not figure out what was making me think of Evanescence songs like “My Immortal” or “Hello,” but I eventually realized the album cover itself looks like the way Ben Affleck’s titular DAREDEVIL experienced rain, a movie defined by at least one Evanesence song. That movie, like this album, is pretty misguided despite featuring some talented people, largely a waste of talent and energy. I don’t think Morisette should be destined to constantly have to prove herself against one of the ‘90s best-selling watershed radio rock albums, but even her 2012 album HAVOC AND BRIGHT LIGHTS cut far quicker to what we appreciate about Alanis Morisette as an artist without any of the bewildering over-the-top melancholy. Should you be looking for an attempted upgrade to nostalgia, try that album instead—it ain’t perfect but it ain’t this. 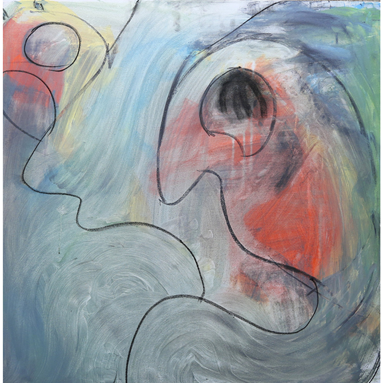 Favorite Tracks: “All My Love,” “You’re Not Alone,” “About to Explode”

Without having heard a single note of the music, seeing that the first two tracks on Luke Jenner’s solo debut, 1, were each seven-plus minutes made my mouth water just a bit. While there is certainly a case to be made that The Rapture were at their best on furious, faster, jagged early material, the dark dance-punk group they became on IN THE GRACE OF YOUR LOVE once they outgrew living in the “House of Jealous Lovers” was always the thing that excited me most about the prospect of more from Jenner. Songs like “Sail Away,” “How Deep Is Your Love,” and title track “In The Grace Of Your Love” each felt like him eking closer and closer to a furious, 10-minute disco heater in the vein of LCD Soundsystem’s “Yeah.”

But 1 is none of that. And I guess I should’ve suspected that given it lacked the branding of his band’s name, but still it turns out there are very few clues in The Rapture canon that could’ve prepared me for what a solo debut would actually sound like. Jenner balances a few different sonic ideas consistently throughout his debut, and each fit like a glove, even if they’re far cries from the bombastic house party jams of his mainstay band. Perhaps the most curious of those sonic ticks seems to be Pink Floyd; opener “A Wonderful Experience” captures all the otherworldly, free-floating qualities of “A Pillow of Winds” or “Fearless” on MEDDLE, and that kind of dark, classic psychedelia carries throughout the album, particularly the heavy plunge into “You Know You’re In Love When You’re In Love” and the subsequent alarm-ringing and police sirens that usher in “Die One Day,” a DARK SIDE OF THE MOON drop for 2020 if there ever was one. But the highlights on 1 are when Jenner channels artists like Majical Cloudz or Youth Lagoon, a type of electro-twinged songwriter pop that can be devastating in its personal drive. The album’s sweeping, 10-minute track “All My Love” is one of the year’s best songs, a fulfilling slice-of-life retrospect on Jenner’s role as a father, a husband, as an adult, on the years spent dormant before The Rapture returned to the stage. A kind of ethereal, tragic cloudiness lingers on tracks like “Asshole” and “You’re Not Alone,” an aged wisdom radiating from his weary vocals. If anything carries over from IN THE GRACE OF YOUR LOVE, the tired darkness of his voice has only grown into itself more. Fittingly, closer “About To Explode” is the best combination of these two ideas, a kind of U2-esque gallop to the rhythm, with classic arena rockism bleeding into this worldly, cleansing build throughout the song. It’s an impressive album by a songwriter whose words and worldview always took a back seat to the actual explosions in the music. It already feels like an underrated album in its own moment and certainly it seems like when we look at the breadth of Jenner’s career decades from now, 1 will stand out as a moment of unique calm.