Being instantly transported back to a specific situation that deeply moved you, in one way or another, is a sign of extraordinary songwriting. Each song off of Julia Jacklin’s new album CRUSHING made me relive certain times in my life that I had otherwise forgotten. Her knack for storytelling paints vivid pictures that easily allow you to put yourself in that situation and experience your own truth through her songs. That talent paves the way for a deep connection between Jacklin and her listeners, as she unapologetically exposes her truest self. In “Body,” she sets off on her journey to finding herself again; in “Head Alone,” she begins to regain control; in “You Were Right,” she takes the reins and separates herself from what used to be; and in “Comfort,” she truly begins to move on. With each song she works through the devastation of her breakup and her subsequent rehabilitation, while inviting the listener to join her, her vulnerability and willingness to evolve inspiring.

Jacklin’s smooth, sultry voice is incredibly familiar, yet it can’t be placed. This is such an incredible attribute to have; her familiarity entices and comforts us, while the inability to place her retains interest and attention. The combination of the two memorably distinguishes Jacklin from other, more mainstream singers. What’s more, her cleverness and ability to turn a life-altering event into art is admirable and only adds to her uniqueness. “When the Family Flies In” demonstrates that ability with the lines “You know it’s bad when the family flies in / Worker bees back to the hive.” It’s here that you truly understood how, well, crushing her breakup was, and while all breakups are certainly difficult and taxing, Jacklin makes you feel as though this one was particularly excruciating.

Though most of the songs on CRUSHING are tranquil and entangled with grief, “Head Alone,” “Pressure to Party,” and “You Were Right” are powerful and upbeat, bringing some much-needed positivity and relief to the album. These songs are very much about doing things her own way, becoming her own person, and embracing everything that she is—all things of great value that everyone longs and searches for. “Pressure to Party” is especially relatable, as you can feel the cortisol flooding the brain as she describes all the pressures put upon her by friends, family, and the like—“Pressure to to come up with conversation / Makes the family fine with my isolation / I know I’ve locked myself in my room / But I’ll open up the door and try to love again soon” essentially describe my whole life. Conversely, “Good Guy” portrays crippling loneliness and the intense yearning for love. Everyone has been in a similar situation, especially after having been in a long, serious relationship. Lines like “Tell me I’m the love of your life / Just for a night / Even if you don’t mean it” or “I don’t care for the truth when I’m lonely / I don’t care if you lie” are words I’m sure we’ve all said or thought at one time. It’s honest, relatable, catchy, and easy to fall into, making “Good Guy” a standout on the album.

From “Body” to “Comfort” you’re along for the ride, and by the end, you’re left feeling somewhat refreshed; it’s as though you’ve gone through everything with her and come out the other side healed and ready to start again. Yet while “Comfort” provides closure and seems like a proper ending to the album, part of me wishes that she had closed it out on a more positive note with “You Were Right.” That placement would have sent listeners off feeling empowered and in control, rather than somber and a bit dejected—especially after hearing “Turn Me Down,” which unearths simultaneous feelings of uncertainty, heart ache, rejection, and embarrassment—you need a pick-me-up after that one. Further, focusing too much on heartbreak can not only be a bit of a downer, but can leave the listener feeling at a loss. This is why song placement is so important. Having the contrasting upbeat songs is a great way to change the narrative into something positive—into a lesson, even, that no matter how dark things may seem at a certain point in time, things can and will get better. We are malleable and strong and can shine, even in the darkest times. Ending the album on a positive note would have really driven that point home.

Not enough can be said about Julia Jacklin’s artistic talent. She put so much of herself into this album and it shows. CRUSHING proves to us that it’s possible to emerge from devastating circumstances with a clear mind and an open heart. Nevertheless, Jacklin has certainly made her mark in the indie pop world as a force to be reckoned with, turning me into a fan with her authenticity, openness, and gorgeous voice along the way. 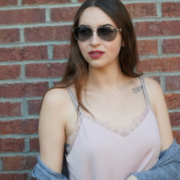 Larisa Southerland
Larisa Southerland is a singer, songwriter, voice artist, and actress in Los Angeles, CA. Music is a big part of her life and she loves having a community to share it with!

TRAILER TRASHED Episode 17: We Were Cool in High School