Favorite Tracks: “Head Like a Haunted House,” “Villains of Circumstance”

I never wanted to be the one to call anything Josh Homme did half-assed—considering that Queens of the Stone Age spent the last 20 years making a name for themselves with chemically-inspired riffs and a deliberate, rock-’n’-roll, “we don’t give a shit” approach to their craft—but VILLAINS, the band’s latest studio release, feels like a weak cash grab, recycling beats from Queens of the Stone Age’s illustrious history and still managing to come up flat. Despite containing a couple strokes of mad genius, VILLAINS on a whole comes off as vanilla alt-rock easy listening, with little of the bravado that QOTSA built themselves on in the first place.

It’s of a special curiosity that SONGS FOR THE DEAF, arguably Queens of the Stone Age’s most well-known album, released nearly 15 years to the day prior to VILLAINS. Since then, the band has done little to advance its sound past iconic rock anthems like “No One Knows” and “Go With the Flow,” outside of a few clever bits. (ERA VULGARIS’ Bowie-esque “Make It Wit Chu” comes to mind.) To that end, Homme brought on esteemed producer Mark Ronson to help him with a new approach to the band’s signature swagger. Per Homme: “I think one of the reasons was to act like a talisman as a reminder of listening to ‘Uptown Funk.’ It’s very tight and vacuous. It sounds fucking great.” “Vacuous” definitely fits the bill here, though I think the word was misused in context… but I digress. Ronson seems a mismatch to QOTSA’s musical stylings, despite the overlapping funk influences discernable on tracks like “The Evil Has Landed” and “Feet Don’t Fail Me,” the album’s rolling opener.

Unfortunately, the opener doesn’t roll towards much; large swaths of VILLAINS hint at an eventual crescendo that never quite materializes. Songs like “Hideaway” and the album’s first single “The Way You Used To Do” lack in any sort of charisma and end before making a real statement, with uninspired riffage and a noticeable lack of exciting twists and turns. “Head Like A Haunted House,” by contrast, is a vapid but fun injection of frantic energy into VILLAINS’ center, acting as sort of an anti-interlude in rebellion against the flatness preceding and following it. It’s the only time I think I’ll ever be able to refer to a theremin as “refreshing,” and it just might be the most unique and compelling track of the LP.

Unsurprisingly, it’s also the shortest song on the album by nearly a minute; most of the other songs are five-plus minutes of self-indulgent noodling. In fact, the daunting length of the nine-track album is one of its most significant downfalls. With a large portion clocking in at six minutes apiece, one would expect Homme and Ronson to be able to squeeze more creativity into every entry, but VILLAINS is sorely content with letting tracks like “Domesticated Animals” and “Un-Reborn Again” meander on without a real satisfying payoff. The best of the sprawling tracks by far is “Villains of Circumstance,” the album’s namesake and finale. Homme is at his best when writing his dark ballads nowadays, perhaps due in part to his brush with death prior to the release of …LIKE CLOCKWORK in 2013. Homme exudes a rare, vulnerable side to him with lyrics like, “I know that life moves on, that’s what scares me so / Have no intentions of letting go,” and I find that VILLAINS is at its best when he does. The outro is particularly fulfilling as a screaming blaze of glory, but it’s tantamount to an exclamation mark on a long whisper.

The dearth of highs and wealth of lows on the album are baffling to me, especially considering that tracks like “Head” and “Villains” prove that Homme and Queens still have something in the tank. “The minimum obligation if you get to be in a band for your life,” Homme said in an interview with Rolling Stone, “and you’ve been doing it this long, is that you would throw everything into each record. The minimum obligation.” VILLAINS certainly seems the minimum obligation; more like clockwork than 2013’s, well, …LIKE CLOCKWORK, less cheeky than ERA VULGARIS or their self-titled 1997 debut, and devoid of a track that screams this is who we are like SONGS FOR THE DEAF, which released almost exactly 15 years prior. Make no mistake, Queens of the Stone Age are indeed on a villainous turn—they’re just playing villains to their own reputation. 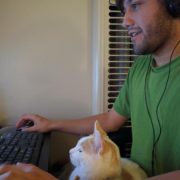