AGE OF plays like a magic trick. At times, the inverse of an explicitly political record, it’ll have you believing it’s something deeper than what it is. Its grandiosity and meticulous aesthetics position the listener in such a way that there must be some kind of extreme depth amongst the microtones and sparse vocals, or in the negative spaces on the packaging and design work. Its byline may as well read: just beauty, being—art for art’s sake. Yet, Daniel Lopatin’s records, almost by default, digest pop formulas and spit back out the contemporary, and in-step with his peers he’s developed a personalized language out of his critique of the present, one slowly revealing itself and building upon each subsequent release. It’s no surprise then for that language of critique to supersede its context, even now with its operatic overtones and market-ready visuals, AGE OF’s presence and delivery extends itself as a simulacrum dancing for its own pleasure.

Listening to this album in sequence, for some reason, does it a disservice. In many ways it tires out by the midway point, only picking up again during its final leg. Its fractured yet rigorously harmonious style and extreme MIDI/organic juxtaposition first made exemplary on the title track and “Babylon” starts to lose its lustre by the second half of “Toys 2,” only picking up again by the closer; fans of Dean Blunt, Laurel Halo, or James Ferraro won’t find much new here. Even after listening again and again, only every other track really seems to land right. However, when listening out-of context, even shuffling amongst other music, AGE OF’s pieces shine quite fine all on their own and stand as unsurprisingly gorgeous, straightforward works. With this in mind, so much of what happens on Lopatin’s records will be translated as organic, living iterations during performance anyway, so really, what’s being offered here, as a record, at all? The pre-apocalyptic Grateful Dead? Singles made legendary via live bootlegs? Taken as installments, and considering the in-depth, yet somewhat tongue-in-cheek, framework presented by Lopatin and company either by interviews or Twitter pages, this record acts more as a list of warnings, or the relaying of warnings given—the sound of a telephone game played out on digital pathways still yet influenced by a sensitive hand. Are we not still struggling to heed those dire messages made this past century?

Lopatin’s underlying thesis appears to be a reaction to the extreme saturation of the present—the feeling that no individual will ever be able to fully comprehend all of the crucial information available to or produced by human society, that our society from individual to collective will never be able to completely sift through and actually understand everything we have created, nevermind the ideas available for production. It examines what lies at the core of the post-truth, post-internet-of-things, neoliberal age: the crises of the individual, or rather, how the dissemination of individualism has destroyed one’s humanity, and furthermore, the very psychosis of that development illustrated here. Reaching that moment of “what do you do?” parallels the pre-colonial reality, yet by the violence inflicted by the colonial age of “what’s next?,” the subsequent derangement of “what do you do?” requires the addendum, “what do you do now?” to avoid the proto-fascist cannibalistic state veneered by a return to nature; modern “naturalism,” in failing to acknowledge history, becomes a weapon against the natural.

AGE OF stands as one of the most pointedly clear-headed and intriguing artistic responses to the tech age, and its implications, to date. With the rise of an ethically nebulous AI behemoth that continues to develop with a crushing inertia, metastasizing the human experience as data, in conjunction with an inability to express decisions on a scale parallel to human values, but rather taking action through brute mathematics and algorithms, the real world decision-making of the AI directly affects the experience and decision-making of human beings. The former subsumes observed human decisions in step with its own computations and the two have created a new feedback relationship. End-of-history plateauing to a bloomed fog of choices erring on superficial performance bleed into the daily minutiae; acting for ourselves when no one is around, performing in the presence of those who aren’t paying attention, miming to those who are, dramatizing the most minute detail—searching for anything to color the emerging void of absurdist existential reality framing the present situation. In neoliberal capitalism we’ve found heaven and hell in the failing runaway structures of our own design, and what’s growing out of its corpse is a breathing Dorian Grey inverse. AGE OF is at once a straightforward demonstration, satire, critique, and acceptance of our fundamental psychological lack, or limitation on a societal level, to fully comprehend, and in many ways, moves as a reaction to the knowledge of these processes taking place right now. Without taking the stance of the paranoid, Lopatin’s narrative outlines a loving and radical gaze, tracing what has and hasn’t yet been sacrificed upon the altar of the anthropocene. 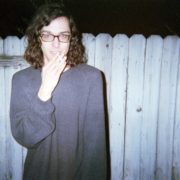 Micha Knauer
Micha Knauer writes for Merry-Go-Round Magazine. They grew up in four different states and once met a prancing chihuahua named Peetie.