GOD’S COUNTRY reeks of death. The slow violence of poverty and houselessness within Oklahoma City noise rock quartet Chat Pile’s debut is abundant, as is the steely flash of the killing floor. Random acts of violence and scenes of death are documented in stunning detail against the backdrop of bass-driven sludge metal that lurches like a locomotive.

Opener “Slaughterhouse” thrusts into GOD’S COUNTRY with drums that pound like a headache and stinging, octave-hopping guitars. Vocalist Raygun Busch is barely human in the opening scream of “Hammers and grease.” Busch, and the guitars all around him, hopscotch between clear-eyed stoicism and unhinged mania. On the next track, “Why,” Busch’s pleas of “Why do people have to live outside / When there are buildings all around us / With heat on and no one inside?” are flooded by blood and grime in the form of nü metal riffs taken to their logical, sludgy conclusion.

Busch’s upfront, graceless lyricism parallels blunt, heavy arrangements that have more in common with a sledgehammer than rock songs. In fact, GOD’S COUNTRY’s greatest strength may be the congruence between its musical compositions and its lyrical themes. When “Anywhere” calls for menacing footsteps and the dazed aftermath of a sudden death, its guitars fill each role. Where the stark, disturbing honesty of “I Don’t Care If I Burn” would be drowned out by Chat Pile’s signature industrial drums and distorted guitars, the band instead provides bleak musique concrète. Though violence is a constant in GOD’S COUNTRY, it appears in myriad forms, always accompanied by its musical analogue.

Viscerality isn’t new for sludge metal or noise rock—just ask Acid Bath or Brainbombs or any number of Albini’s bands, acts whose misanthropy precedes them. But where those bands seek largely to intimidate, living for shock and awe, Chat Pile often wield violence to evoke empathy. Pain here is systemic, personal, and senseless. By the time “I Don’t Care If I Burn” comes around, its declaration of “I think about killing you every day” feels more like an assertion of self against a system that seems not to care than a demonic act directed toward those most vulnerable to it. And I haven’t even mentioned the nine-minute epic closer, “grimace_smoking_weed.jpeg.” (Can you imagine writing a song this good and still having the sense of humor to name it that?) “grimace” features lyrics inspired by IN A GLASS CAGE, a controversial revenge torture film that speaks to the cyclical nature of violence, and the song investigates those same wounds.

Underneath a sequence of pulverizing riffs that double as one of the year’s best homages to Korn, Busch stands up to a figure of violence, a “purple man”: “Don’t think I’d forget / That you hurt me in a past life,” before admitting to be no different; “I’m twisted / And frail / Broken up / I’m purple / I’m purple man, too.” The song devolves into a war of stammering feedback and unintelligible screams before fading into nothing as the speaker presumably dies, leaving us with only loose strands of a conclusion. Violence surrounds us all, and we might be tempted to fall into the same patterns. As entrancing as that enormous bassline might be, though, it can only bring pain. 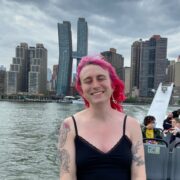