Kevin Barnes is eccentric. Over the past 25 years, that core conceit for of Montreal has not changed, even if seemingly everything else has. One could say that Barnes has more persistently rejected categorization and standard conceptions of normalcy as they’ve grown older. If you need evidence, they’re happy to provide it: See of Montreal’s track-by-track breakdown of their newest album FREEWAVE LUCIFER F<CK F^CK F>CK, defined by scattered, comma-adjoined premises that almost answer questions but more readily raise new ones.

The band’s past 10 years have been strange. The pretty, country-flavored LOUSY WITH SYLVIANBRIAR and the cold, dark assortment of synth-laden double-tracks WHITE IS RELIC / IRREALIS MOOD stand out as moderate successes among a decade of releases that could be referred to as scattershot, but the halcyon days of SATANIC PANIC IN THE ATTIC and HISSING FAUNA, ARE YOU THE DESTROYER? have since passed. Barnes possesses a unique feel for engaging melodies in pop, but that hasn’t always shone through in recent projects. In that sense, FREEWAVE LUCIFER F<CK F^CK F>CK is a step back to form.

Don’t mistake that for the group embracing regression. FREEWAVE LUCIFER is a consolidation and refinement of the ideas explored on last year’s I FEEL SAFE WITH YOU, TRASH, rather than some crass grab at past glory. The latter was a record as fascinating and essential for its creator to make as it was bloated and unfocused. Barnes had recently come out as non-binary/genderqueer, and while they indicated it wasn’t so much a recent discovery as just time to make it known, this aspect of Barnes did find its way into their music. At a mammoth 20 tracks, I FEEL SAFE WITH YOU, TRASH felt like someone trying to sort through all of the things that defined them in front of a captive audience, only to coyly conceal them in real-time. Barnes’ fondness for unusual wordplay will likely always belie bare emotional openness, but there’s more to grasp firm hold of on FREEWAVE LUCIFER in roughly half the run-length.

“Marijuana’s a Working Woman,” the album’s opener and lead single, refers to, among other things, “internal gender affairs.” When observing the lyric “When people ask me my gender / I just tell them brunette,” the effete lilting delivery nearly causes the brain to transform “brunette” into “roulette”—maybe it’s a coincidence, or perhaps it’s a clever trick. Cloaked in a soupy haze of weed, the song drifts from one melody and thought pairing to the next, riding on the wave of an easy bass groove. As it fades out on “Depression eels committing thought crimes / How does it feel to be a bust,” “Marijuana’s a Working Woman” reveals itself as a hypnagogic force field of self-reflections and daydreams fueled by THC, lifted to stave off encroaching ennui.

Despite this, “Nightsift” is FREEWAVE LUCIFER’S highlight: a pulsating and paranoid horror synth crisis that ruminates on the relationship between performance and dissociation, as well as the uncertainties of identity (“There’s no human pain in my voice / It’s something else / What if she’s just a conversation / I am having with myself?“). It carries a vulnerability that Barnes often seems reluctant to embrace, and it’s all the more effective because such instances are rarities. of Montreal without an ornate curtain to tuck themselves behind would cease to be of Montreal: a prospect that has long been as wonderfully mystifying as frustrating. FREEWAVE LUCIFER does not buck that trend, but it does offer more gripping hooks and more compelling peers behind the curtain than any of their albums since PARALYTIC STALKS. Those qualities alone could be enough to stoke new excitement regarding the veteran band’s future. 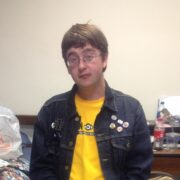