Art Moore’s self-titled debut is the type of record where the main critique might actually be a compliment; though, like all nuanced compliments, that may depend on how it’s delivered. The newly-formed three-piece, which features Boy Scouts’ Taylor Vick on vocals, backed by instrumentalists/producers Sam Durkes and Trevor Brooks, has created a self-titled record that manages to surprise, delight, and ingratiate itself with impressive brevity. It is a side-project that manages to justify its existence again and again throughout the 10 tracks, and yet I can’t shake the need to qualify the project as “side” rather than something standing wholly on its own. This is where any compliments become, if not backhanded, than at least delivered with a sharpened edge. ART MOORE might not reach the peaks of Taylor Vick’s previous work with Boy Scouts but, as a compendium, it remains impressively whole.

Art Moore was initially formed by Durkes and Brooks, who began their collaboration alongside Chicago songwriter Erza Furman around the time of the release of their seventh record TWELVE NUDES. Together, the two began to hammer out nascent instrumentals, demoing as a way to explore sounds outside of what they were used to. Eventually, they approached Vick about contributing her vocals and songwriting talent to the project, and so both the band proper, and their songwriting method, was born. It was, according to all involved, an incredibly fluid and painless collaboration, which you can hear throughout ART MOORE; lead single “Snowy” is the kind of swirling, spacey cut you get when you blend talented instrumentalists bursting with ideas with a songwriter who positively oozes hooks and choruses. It’s busy, to be sure, but elegantly resists becoming cluttered despite its blizzard of synths and pulsing beat, even as Vick lays down verses more verbose than anything she’s written to date.

For Vick, the empty canvas of ART MOORE seems to invite rumination above all, with memory and its role in even the most mundane of moments a major focus throughout the record. Opener “Muscle Memory” presents a long familiar tail of past love, and how reminders exist both everywhere and nowhere; on “Rewind,” she sings of how fickle the past can be, comparing the sharpness of her own recollection against the dullness of a partner’s. These songs take wildly different approaches sonically, the former a guitar-heavy song that would fit snugly on Boy Scouts’ 2021 LP WAYFINDER, the latter the kind of atmospheric, understated dirge you can easily see holding its own as the wordless instrumental Durkes and Brooks first formulated. And yet, Vicks’ ability to wrangle these disparate sounds into something cohesive, through both effortless vignettes and the indelible charm of her vocals, remains the most impressive part of ART MOORE.

Any project that would have brought more music from Taylor Vick would have been welcomed, so, in a way, ART MOORE was predisposed to be at the very least welcomed. And while it might not ascend the heights of Taylor Vick’s solo work as Boy Scouts, given how high those peaks have been, this isn’t the harsh critique it might seem. This may be a side-project, but ART MOORE is far from a throwaway. 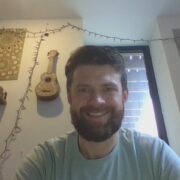 Sean Fennell
Sean Fennell is a pop culture obsessive from Philadelphia who's desperate attempt to watch, read, and listen to everything is the great battle of his time. Sean graduated with a Journalism degree from Shippensburg University in 2015 and since that time has been freelancing for sites all over the web, covering everything from music to television to movies and interviewing dozens of creative minds along the way. If you’re wondering whether he has seen or heard it, he has, and he has thoughts.