Has anyone ever told you to fake it ‘til you make it? Has it ever actually worked for you? The idea that pretending to be some kind of way would unlock the real thing seems almost comical from a certain angle. Pretending to be a cowboy long enough will just make me a cowboy at some point? Wouldn’t I just be someone who looks like a cowboy and talks like them, but not know anything about cattle, or riding horses, or lassoing things? SMILE FOR ME, developed by Yugo Limbo and Gabe Lane, dissects the ridiculousness of that fake cowboy construction by placing the player in a bizarre, off-kilter world run by someone obsessed with the horse part at the exclusion of basically everything else. It’s as wild as you might expect, some intersection of Double Fine-esque character-based humor, weird cartoony art, and complex thoughts on signs and signifiers.

SMILE FOR ME focuses on a young florist who, feeling sad one day, falls for the online ads of Dr. Habit, a literal toothless puppet who runs a mental health facility called The Habitat. The Habitat is a (prison-like) institution focused on cultivating “smiles” and more broadly, happiness in its sad patients. The player character is introduced to various patients and sort of stumbles backwards into helping them feel happy outside of the system of The Habitat by fulfilling requests, solving puzzles, and having conversations to learn more about them. 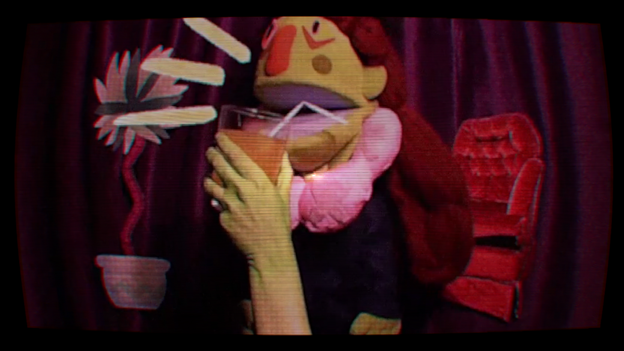 Dr. Habit has human hands and it’s not okay

It’s a familiar point-and-click adventure game setup save for the novel way you answer characters’ questions. You never vocalize anything to the characters, there’s no complex dialogue trees, you only answer “yes” or “no” by shaking your mouse up and down for “yes” or right and left for “no.” That this feels limiting is part of the point. It always feels appropriately silly to vigorously waggle the camera back and forth. In another quasi-twist on the formula, your inventory is a “bouquet” of flowers and other increasingly random and abstract items that you use on objects and characters in the world to advance the narrative. There are some frustrations here that feel endemic to the point-and-click genre. Many of the puzzles in the game are clever and humorous, but there’s guaranteed to be at least one that ends up being solved with trial and error or the help of a guide. It doesn’t ruin the game, because the main draw lies mostly in the game’s writing.

There’s nothing necessarily complicated in the actual story of SMILE FOR ME. But as the game continues, the mystery of The Habitat unfolds itself into something both personal and sinister. For being so committed to getting their patients happy again, why is Dr. Habit so threatening? Why do they constantly mention some distant “Big Event” when everything will be set right? Why do they ask their patients to “hold onto their frowns” and bottle up their emotions and “store them in the basement” rather than express and process the way they feel? What’s going on with all the teeth? Every character has some opinion, whether on Dr. Habit’s bizarre live-action PSAs that start each day at The Habitat or the strictly enforced bedtime policy whose violation receives its own kind of threat. There’s something afoot and Dr. Habit seems more and more annoyed that patients are getting more and more happy with the player’s help rather than waiting for whatever they have in store. It’s fun to help these characters, from angry photographers to creepy, violent children to depressed clowns. There’s a wide breadth to the types of oddballs on display, and it feels equally gratifying each time your able to make their cartoony frowns turn to blue, sparkly grins. 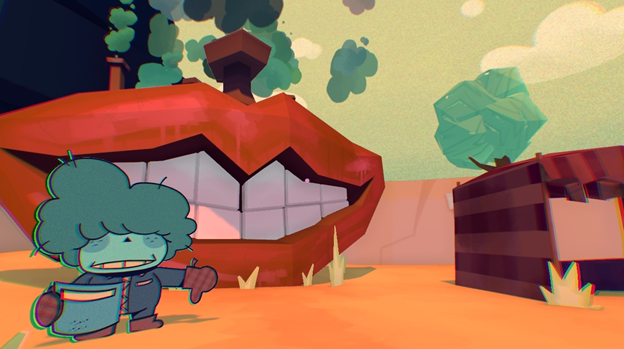 Just a mechanical mouth in an outdoor carnival, nothing to see here

The making of an adventure game seems to me to often be about creating a world with its own logic and withholding absolute understanding of those rules that govern it so that players can be challenged and surprised. Things get frustrating because it’s impossible to make everyone think in the exact way you want them to. And in some way, SMILE FOR ME suggests that we shouldn’t want to. SMILE FOR ME is full of symbols of happiness, grins and teeth and lips, but they are proven to never really capture the whole picture: they’re a surface and not much more. Is a smile really the best indicator of someone being happy? Are feelings really that binary, really just the two poles of happy and sad? When someone really desires that surface above anything else, they miss the forest for the trees. The cast of characters don’t “get happy” by “saving their frowns,” or smiling all the time, or any other off-the-wall treatment. They get happy by being allowed to express how they feel, by having their needs met. Sometimes that can be as simple as an affirmative head shake, sometimes more. What matters is that in helping others in SMILE FOR ME, you feel good too.

Big Thief Come Back Down to Earth on the Frenzied, Tangible TWO HANDS