In the fall of 1985, Mick Jones and Joe Strummer both had a fresh record out. The former co-leads of “the only band that matters” had gone their separate ways about two years prior, in September of ’83, with Strummer carrying on The Clash’s name with original bassist Paul Simonon and a trio of “new recruits” (drummer Pete Howard and guitarists Nick Sheppard and Vince White) while Jones formed a new band, Big Audio Dynamite. In October ’85, B.A.D. released their debut album, THIS IS BIG AUDIO DYNAMITE, to generally positive reviews (the second single, “E=MC2,” was a chart hit), and on November 4, 1985, The Clash released what would be their final album, CUT THE CRAP, to precisely the opposite response. Scrubbed from nearly all career-spanning retrospectives, CUT THE CRAP has gone down in history as a complete failure. Disowned by the band, who would break up for good mere months later, it’s often singled out as one of the worst records of all time. Yet 35 years later, our world has changed: punk purism is out, and maximalism is in. What on first blush might strike a listener as cluttered and confounding production is no longer a bug to many, but a feature. In the time of the hyperpop movement, did CUT THE CRAP leave a legacy?

The main character of CUT THE CRAP’s story is not Joe Strummer, nor the new recruits, but manager-turned-producer Bernard Rhodes. Rhodes, who played a large role in the formation of the band but initially parted ways with them as they were gearing up to make LONDON CALLING (he didn’t like the way they were straying from their punk roots, which is, of course, exactly the thing most people like about that record), was begged to return by Strummer, who threatened to leave the band if he didn’t. In the wake of Jones’ firing, though (a decision he claims to have had nothing to do with), Rhodes saw a second chance to steer the ship his way. Unlike the first time around, and perhaps inspired by his friend Malcolm McLaren’s electro success with Buffalo Gals and the subsequent record DUCK ROCK, Rhodes no longer advocated for three chords and the truth, but for an eclectic blend of programmed drums, chaotic synthesizers, and cut-up sampledelia—the same sonic hallmarks Jones adopted with Big Audio Dynamite. This time, it was the band that professed a desire to return to their roots, but, as The Specials say, “Bernie Rhodes knows / Don’t argue!” What Rhodes says goes, and he became not only Strummer’s songwriting partner, but, when the time came to hit the studio, the sole producer (under the pseudonym Jose Unidos), shutting the band out of the recording process whenever possible. His vision defined CUT THE CRAP, whether the band liked it or not… which they did not. Nobody really did, in fact. The band disintegrated, the album became a footnote, and that’s the end of that as far as anyone seems to be concerned.

While one might have expected the album’s critical and commercial failure to turn Strummer off of synthesizers and drum machines forever, the very next year he reunited with Jones for Big Audio Dynamite’s second LP, NO. 10 UPPING ST., which is arguably an even stranger and more abrasive listen than CUT THE CRAP, with one key difference: this time they were doing many of the same things on purpose. It seems The Clash, as always, were simply ahead of the curve in inadvertently taking a screwdriver to their rock roots. In the years to come, a new scene would emerge from the English Midlands, a scene that would occupy the midpoint between Big Audio Dynamite’s dance floor-ready genre-blending and the absurdist whirlwind of CUT THE CRAP. These bands, like Ned’s Atomic Dustbin, Gaye Bykers on Acid, Jesus Jones, Age of Chance, and Pop Will Eat Itself, played a style of indie rock known as grebo, which evolved from a variant on gothic post-punk into a sound that took screaming guitars, dance beats, and devil-may-care sampler work and stuck them all in a blender. Suddenly, Clash songs like “Dictator,” with its sliced-up radio transmissions and wall of sampled horns, no longer sounded out of place, but more like a dry run for the chaos to come. Tunes like “Are You Red…Y” and “Play to Win” are more reminiscent of the spaghetti western post-punk minimalism of Wall of Voodoo and the brashness of the decade’s pop music than they are any earlier Clash material.

Divorced from the weight carried by the band’s name, CUT THE CRAP is, while certainly not a hidden masterpiece, an eclectic and catchy record. It’s capable of moments of strange beauty (“This Is England,” “North and South”) alongside ludicrous maximalist exercises (“Dictator,” “Life Is Wild”) and tracks that harken back to vintage Clash classics (“Cool Under Heat,” “Three Card Trick”), albeit with a unique Rhodes-ian flair. When plucked from its usual context and placed in a new one, it reveals itself as an unintended member of a grand, strange lineage, one that runs all the way from synth-wielding rockers like Silver Apples through tape-manipulating art-punks like This Heat and the sample-driven dance-rock of Chumbawamba and Back to the Planet (Tom Ewing called it “collision pop”) straight to the genre-hopping hyperactive avant-pop of today. It’s far from the best of these records, but deserves to be considered as an unsung entry in that canon rather than just the black sheep of The Clash’s discography. Listening from the present, CUT THE CRAP doesn’t strike me as a final failure of punk, but as a massive broadening of horizons. When you listen with a fresh set of ears, it’s the kind of thing The Clash had done so many times, only in a brand new futuristic direction nobody was quite ready for. 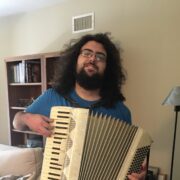 Evan Pincus
Evan Pincus is a Los Angeles-based musician, listener and habitual movie-watcher. As a child he was exposed to The Beatles, The Monkees and Buddy Holly and hasn’t been the same since.