Maybe, my acumen’s on par with Kool G. Rap and them/

Give me the proper respect, mothafucka’, we back again/

For a couple things we lost in the fire/

The drive, the desire to perform on a higher plateau/

Wondering how we got so far from inspired/ – Black Thought

The 1993 movie CB4 was a biting satire of both hip hop and the larger music industry. The main character, MC Gusto (played by Chris Rock), was a phony: the stories he rhymed about belonged to an incarcerated club owner (played by the then-unknown Charlie Murphy). The moral of the story was that we music consumers were being hoodwinked, bamboozled, led astray by a music industry that put money and muscle today behind whatever would make it enough money to buy some new toys—and, of course, run the same hustle tomorrow. It’s clear enough that there was a lot of fakeness in the game as of 1993, and that opportunistic business types and the desperate artists they leeched off of were partially to blame. What’s less clear is whether or not the opposite of fakeness—genuine, serious artistic authenticity, maybe—was ever on the menu in hip hop, and if not, who we should blame for that. To answer that second question, we have to refocus our attention away from the artists or even the music industry itself and shift outwards to the society that both operate in: social conditions in general decide whether a genre of art (or the community that produces it) can regularly produce genuine art.

15 years after the release of CB4, Black Thought’s freestyle on Funkmaster Flex’s show in December of last year flexed on the same topics. The bars that start off this piece demonstrate a nostalgia for a now-gone era where there was bonafide artistry. Sing along if you know the words: there was a time when some “we” had drive and desire, but now we don’t. Instead, the kids are mumbling about lean over trap beats (and, I would add, coming dangerously close to our lawns).

It’s hard not to take this seriously—Black Thought has the authority to say this if anyone does. For one thing, he was there: he’s a multiple decade veteran of both the industry and the culture that industry bleeds for cash, and he has whatever credibility comes from the fact that he’s better than everyone else—a fact that, if Smack DVD sales are any indication, still counts for something. And he’s onto something, in that there was a time that the genre really was firing on all cylinders: between ILLMATIC (Nas), ONLY BUILT 4 CUBAN LINX (Raekwon), THE SCORE (The Fugees), THE COMING (Busta Rhymes), and THE UNTOUCHABLE (Scarface) it feels like every other album released between ‘94 and ‘97 was a classic.  These classics, produced by many of the genre’s very best artists, were relentlessly original (voice aside, who would confuse Busta’s flow with Lauryn’s?) and were commercially successful.  Since then, things have shifted a bit, with Bad Boy, Def Jam, and other labels cracking the code of commercial success, paving the way for an industry that has been dominated by formulas ever since.

So there’s something to complain about.  The 2002 feud between Nelly and KRS-One advertised itself as a generational feud between artists, but included a battle about what hip hop was about, really (and, maybe not-so-coincidentally, also made Complex’s top five corniest rap beefs of all time). It’s hard not to read something similar into whatever we’re going to call what happened between Slaughterhouse lyricist Joe Budden and Migos, the Atlanta rappers who use the “mumble” style of delivery. Nas’ 2006 HIP HOP IS DEAD was another notable entry in hip hop’s narrative of itself, with Nasir “reminiscing when it wasn’t all business”—and, on the same album, celebrating the triumph of “Money Over Bullshit.” And as we speak, hordes of Golden Age purists, bgirls and bboys, backpackers, and self-proclaimed Zulus all stand at the ready to tell you the same thing, armed with their list of top five dead or alive and a playlist of real hip hop you didn’t ask for.

What’s real hip hop, and did we ever have it? Fakeness is easy to spot—the Roots’ “Rap Video Manual” will get you through the top videos about as well as it did when it came out two decades ago. Or maybe not: “Express Yourself” and “Fuck tha Police” were on the same album, and the same hand that penned ILLMATIC also wrote “Oochie Wally”.

The uneasy reality about hip hop is a reality about the world the genre lives in—in the United States, especially, money and bullshit are starters on the same team and take turns playing point. This is big business. This is the American way.

Maybe there are some real rappers. Kendrick Lamar, Joey Bada$$, J. Cole, Noname, Chance the Rapper, and A$AP Rocky are all standouts of this new generation, masters of their craft and also, in some cases, inventors of new ones. But if they are “real,” it’s not because they are purists of any kind. Their music isn’t uniformly high-minded, “conscious,” or spiritual. Rather, they cover the whole range of human experience, from thoughtfulness to gossip, ingesting of spiritual vibes to ingesting of weed smoke.

The secret behind these real rappers is not that they have some special commitment to authenticity that no one else has. The difference between them and others is no secret at all: they are just very, very, good at whatever it is they happen to do musically. That fact breeds the earned confidence that their music can be good whether talking about their philosophical thoughts, or the club, or murder, or their grandma. It’s the earned confidence that lets them skip to making music that sounds good and waiting for people to realize that they’ve done that rather than as hustlers pandering to their clients via formulas. It’s the confidence of those who do not need gimmicks because they’ve mastered their craft.

If we want this to be how a whole genre moves, we need to give all the genre’s musicians the opportunity to develop this level of skill at what they do. But right now, as far as hip hop’s core source of cultural energy—working class Black and brown folks—this approach to music is only viable for the few that won enough of the lotteries in genius, hustle, and opportunity to develop these musical abilities and access the resources needed to consistently make high level work. Meanwhile, on the other side of the hurdles of poverty and systematic disinvestment in the arts, are scores of their peers who could have done the same if given half a chance.

It’s unsurprising when the United States produces outstanding violinists. There’s a whole social infrastructure for it, including thousands of music schools, career opportunities, and crucial public school education in the foundations of music (that is, for those who grow up in the right neighborhoods). Other ways of crafting society in a way that empowers a generation to produce good art can be more informal: the church and the musical community it sustains; the nightlife music residencies that enabled musicians in the previous generation to securely put down roots in a community; the bonds between parents, extended family, and community members that facilitated the old teaching the young how to count, chart, and play basic chords, scales, and rhythms.

These formal and informal ties were crucial to the cultural transmission of previous generations of music and the knowledge that fueled it to the next generation, both of which became material and fuel for the next generation.  Some of these ties survived the ’70s and ’80s (find me a more consistently sophisticated and skilled collection of musicians than elite Black gospel musicians anywhere in the world. I’ll wait). But many of these ties were interrupted by the gradual public disinvestment in music education and investment in mass incarceration. Now aspiring artists in countries like Sweden have better supported opportunities to learn the previous generations of Black music than do most young Black musicians in the US—just ask the co-writer of Gambino’s retro funk hit “Redbone.”

Without that infrastructure—and reversing the troubling trends of increased economic inequality that threaten the critical mass of people able to afford instruments, lessons, and the free time to put them to good use—good music will be harder and harder to come by. It won’t just be Black music that loses out if these trends keep up: just ask the guitar industry.

Maybe what we lost in the fire of the ’70s and ’80s was our drive and desire. But it’s just as important to remember that it was a school house burning to the ground. If we want to get back what we lost, we’d better build a new one. 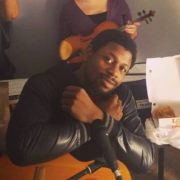 Femi
Femi is a rapper, singer, and multi-instrumentalist based in Los Angeles, California. His primary musical influences are from African diasporic music, especially hip hop, funk, Afrobeat, jazz, and salsa. His next performance is on July 12th at Industry Cafe and Jazz in Culver City, LA.