When I was in the sixth grade I became obsessed with retro video games, and following the path of many young gamers, I bought myself a NES and started exploring. I had two games originally, BATTLETOADS and DOUBLE DRAGON, and I played them so much you would think the plastic was melting out the cartridges, my thumbs raw from jamming the buttons with all of my might. It’s been a long time since I was in sixth grade, and while my NES has collected a lot of dust, my craving for a fun, retro beat-em-up has only been growing. I thought my craving was going to be filled with TREACHERY IN BEATDOWN CITY with its clear beat-em-up heritage, but the result is more complicated.

TREACHERY IN BEATDOWN CITY follows three protagonists, Lisa, Brad, and Bruce, who all work together to save the President, Blake Orama. The political humor is as direct as you’d expect as they walk around Beatdown City, fighting random criminals and bullies on the street, working their way towards saving the President from ninjas. 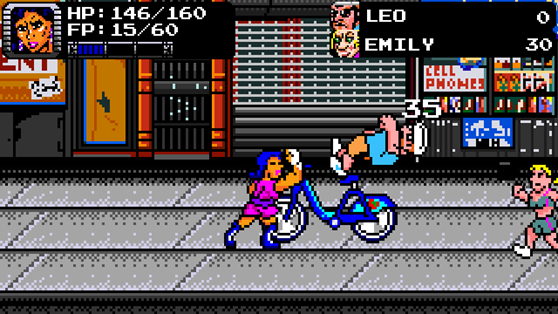 The story is sweet and simple, perfect for a game about beating up some bad guys. Does it matter why they’re bad? No, we just know they’re bad guys and we have to fight them. To quote Steve Martin in the 1989 film PARENTHOOD, “They’re bad dudes. That’s why it’s called Bad Dudes.” Aside from that delicious simplicity, if you’re looking for a button-mashing fighting game, this is sadly not the game for you. Even the load screen warns that the developers are anti-button-mashing. Rather than manic pressing, the combat works on a point system. You approach the villain, go to a select screen, and choose an attack. Each attack has a different point value that will take points off of the villain’s overall total. Once the villain runs out of points, you win. It’s very similar to the combat system in MARIO & LUIGI SUPERSTAR SAGA, but in a beat-em-up setting rather than the turn-based, item-assisted combat that game made popular.

While this system is unique, it becomes repetitive quickly. Sure, button-mashing you’d expect from a game of this type can get repetitive as well, but it at least gives your hand more to do and generally feels far more active. The other problem is that the combat system in TREACHERY IN BEATDOWN CITY is annoying. When the opponent fights back, you have the choice of blocking; however, blocking doesn’t always work. It’s random when blocking will or won’t work, so sometimes you just won’t block successfully and there’s nothing you can do to avoid losing points. This system also features another interesting complication: the player is able to switch between the three main characters during combat, taking advantage of different characteristics and talents, whether it’s improved hand-to-hand combat or better grappling and tackling. It doesn’t entirely excuse the frustrating aspects of the combat, but it does further differentiate BEATDOWN CITY from the games it’s clearly inspired by. 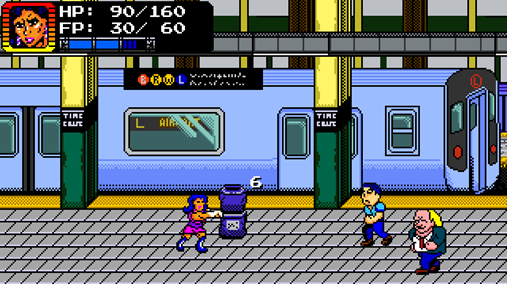 Time to beat these bad guys up, with… numbers

TREACHERY IN BEATDOWN CITY has a great, retro aesthetic. It looks exactly like a game from the NES, even including the cutscenes. This game does an excellent job of taking me on a nostalgic trip back to my sixth grade-self, but a few fights into the game and that feeling disappears. The game’s repetitive fighting system seems to rely more on luck than skill. It’s different in unique ways, while harkening nostalgically to popular genres of yore, but the two never meet satisfactorily, even as this game carries one of the best video game titles in recent memory. TREACHERY IN BEATDOWN CITY has its heart in the right place, but it never connects for a knockout punch.