Favorite Tracks: “Like A Girl,” “Soulmate,” “Exactly How I Feel (featuring Gucci Mane)”

Lizzo wants you to feel good about yourself this summer, whether you’ll be going Whole30 before you hit the beach or ordering late-night fries after an evening of heavy drinking. In fact, Lizzo just wants you to feel good about yourself, period (PARKS AND RECREATION’s Adam Scott get it). CUZ I LOVE YOU, her first studio album as part of the Atlantic Records family, is another step forward in her career-long mission of promoting positive body image and self-esteem. It’s a message perfect for the insecurities of a 2019 audience, one that is constantly evolving to fight social stigmas while being held hostage by the curated content of social media influencers. While this latest release is not necessarily a foray into a new sound, it does cement her role as a vibrant pop star with limitless amounts of confidence. Through her notable vocal chops and infectious personality, Lizzo has broken through on this latest release, one which is relevant as much as it is timeless.

By blending boisterous soul with dashes of trap and disco, CUZ I LOVE YOU is a lively 33-minute set of bangers that rarely lose momentum. From the gate, the title track “Cuz I Love You” has Lizzo enter with peak bravado before monstrous, cascading orchestral hits, heading right for your heart. It’s a grand arrival, one that preempts her declaration of powerful femininity on the following track, “Like A Girl.” Here, Lizzo plants herself in the typical scenes painted by a large amount of male rappers i.e. throwing money in the air at the notorious Atlanta strip club, Magic City. Making it rain would, naturally, precede hanging out the windows of her luxury vehicle while she brings boys to their knees. Indeed, Lizzo intends to take on the night in the least “ladylike” fashion possible, with a glorious irony to reveling in her endeavors while dominating their femininity.

Fueled by her role models Lauryn Hill and Serena Williams, she marches forward into leading single “Juice,” a funky jam laced with nods to Janelle Monae-type production. In fact, Monae’s 2018 release DIRTY COMPUTER contains a track titled “I Got The Juice” with a similar messaging to Lizzo’s; the two play a nearly intertwined role in popular music as black women with distinct sounds atop even more distinct purposes—Lizzo promoting body positivity and Monae often fighting for the LGBT community, their “juice” being more than just sex appeal, power, or talent. It is, instead, what fuels their work to help transform perception for the greater good, something Lizzo even acknowledges by stating “If I’m shinin’, everybody gonna shine,” positing the thought that when she is able to fully break through the barrier of ill-conceived pop star imagery, that all those like her can follow a path to the top.

My favorite track is “Soulmate,” a glitzy celebration of falling in love with yourself. Lyrically, it gives Lizzo a chance to semi-rap some well-played jokes while also allowing room for gospel-trap fusion in the production. Her triumphant proclamation, “Look up in the mirror like / Damn, she the one” fades out with a full choir riffing over signature trap snare. It pairs nicely with the subsequent “Jerome,” where we get a glimpse into her more intimate, tortured mindset. Suddenly the focus is not solely on Lizzo’s good time; likely a former lover, Jerome is painted to be a fuckboy who she decides to cut out of her life totally. It’s a refreshing perspective on a familiar story, reminding us that you do not need to create drastic change in order to earn someone else’s love—in a world where pop star Meghan Trainor also defies body stereotypes in her music, she tends to paint a picture of doing it all for a man. The contradiction here is Lizzo’s essential reminder that she does not always need someone else’s love to find happiness in life—she makes it all on her own.

From this point on, we are in slightly different territory. “Crybaby” is a soulful jam with plenty of room for vocal flexing, while “Tempo” leans in the direction of a club banger. Its distorted guitars and drums remind us that Lizzo is an aspiring auteur who appreciates variety in her instrumentation. Yet the chorus’ “I’m a thicc bitch, I need tempo” and a creative verse from Missy Elliott find her not taking herself too seriously. Labelmate Gucci Mane stops by on the funky “Exactly How I Feel” before “Better in Color” puts the emphasis back on Lizzo. It’s the kind of celebratory track that would best appeal to today’s empowered audience of various races, gender identities, and sexual orientations. On this track, as throughout the rest of CUZ I LOVE YOU, she is able to hint at various social feelings without being preachy or forceful. To her, love between two humans should be unrestrained, and she offers this thought without being over the top.

After a storm of party songs and vocally challenging anthems, closer “Lingerie” is sultry and seductive. Describing her see-through panties, it is again a fresh perspective on songs we have heard in the past told through the eyes of someone we usually do not hear from. In her success at capturing the zeitgeist through owning herself and her audience, I am curious to see how Lizzo’s career will continue to take shape. I would most compare this juncture in her artistry to that of Billie Eilish: while the two have some years between them and come from vastly different sounds, they each are fighting what it means to be a female pop star. So far, their non-conformity has been victorious. Eilish, while only 17, has already shown the world that unconventional style can lead to global success. In Lizzo’s case, many pop divas have been sexy in their music, but few are as wonderfully defiant. 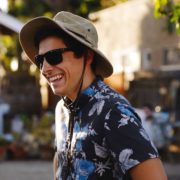 Michael Stanziale
If it’s a dad joke, a Shaggy song, or just something that is straight up bonkers, chances are Mike will be into it. When he isn’t subbing in for the Dos Equis man, he can be found subbing in for Ned Schneebly. (Damn, that’s a good movie.) He looks forward to sharing his thoughts, especially his recent confusion as to why Shwayze appears in GOD'S NOT DEAD 3.