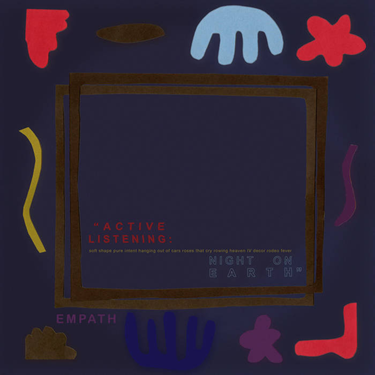 I’ve listened to Empath’s ACTIVE LISTENING: NIGHT ON EARTH a number of times now—I don’t have a number off the top of my head, but let’s ballpark it at eight or nine. And every. single. time. I’ve thought to myself: What the hell IS this? The tags on Bandcamp help form a narrative, one that certainly frames a lot of the angst that steams off the record (“Gay,” “Hardcore,” “Queer,” “Pop Punk,” “Philadelphia”), and yet all of those descriptors never quite nail exactly what it sounds like or why it’s so magical—sure there are traces of pop punk and hardcore, but whatever is happening on ACTIVE LISTENING is its own breed of dizzying hypnotic punk rock (if that is even the framework in which we should describe it). If someone (let’s say me) were to describe the record, it’d probably be easier to site Willy Wonka’s befuddling boat ride than to actually describe the music itself, which is a genuine start-to-finish roller coaster of sounds that 172 words into this review I haven’t even gotten around to accurately or adequately describing. We start off familiar enough; some crickets, a bird chirping. And then quickly, “Soft Shape” begins its pop-up carnival, a bouncing yet longing piece of music that serves as a nice introduction before quickly fizzing out into some scrappy circle pit punk rock (“Pure Intent”), a synthy interlude (“Hanging Out of Cars”), and a fuzzy yet melodic piece of distorted pop (“Roses That Cry”) that dazzles with traces of No Age’s “Eraser.” That’s, naturally, about the time I think to myself: What the hell IS this? Of course, I’m not sure Empath want me to answer that—the album works, in part, because it defies to be put in any kind of box, and that its basically one extended journey with little time to breathe only makes the whole thing more exhilarating listen after listen. By the time we get to Catherine Elicson’s layered howls on the closer, “Rodeo Fever,” drenched in reverb and feedback and likely decades worth of scorn and anger, you’re right there, understanding all of it. It’s a unique record, to say the very least—those looking to fill the cosmic energy left behind from Perfect Pussy’s singular 2014 album SAY YES TO LOVE will want to check this out, but even that isn’t quite right either. Just do yourself a favor and give it a listen now on Bandcamp. 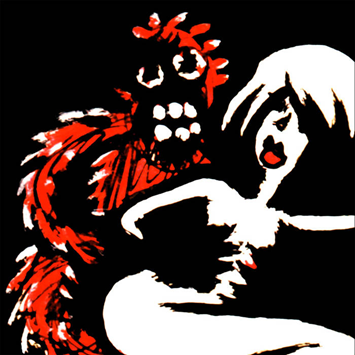 The Tough Shits – BURNING IN PARADISE

I irrationally love The Tough Shit’s BURNING IN PARADISE. In fairness, one of my favorite subsets of music is rowdy, day-drinking punk music, the kind you wish was playing when at 12:43 p.m. the bartender leaves the door open to the windowless bar so a singular source of afternoon daylight can spill in—a silent reminder that you should not be there making mistakes as early in the weekday as you are (in recent memory, The Men were making strides to perfect this on TOMORROW’S HITS). BURNING IN PARADISE is all of that energy in one frolicking, barbacked punk record, a sweaty rock marathon that has a bit of The Replacements, some of The Men, traces of early Green Day, twinges of Big Star, a small part of Bruce, and a lot of pitchers of Coors and shots of well whiskey fueling it. If it’s not the blurry gang vocals or the tipsy piano playing, the youthful rowdiness of the whole record will grab ahold of you and not let go. The Tough Shits seem like they’re on the verge of a burnout, and I, for one, fucking respect that they’re spending their time BURNING IN PARADISE. For me, this is comfort food. Head on over to Bandcamp, crack open a cold one at noon, and start your mid-afternoon party with Philadelphia’s firestarters The Tough Shits.

The Live Generosity of Strand of Oaks and Wild Pink