Vildhjarta! They’re back with their first album in a decade! They suck so much more than I remember! MÅSSTADEN UNDER VATTEN is some of the most tedious and snore-inducing djent I’ve ever heard—and I’ve listened to Neosis. The songs are just: chug… chug chug……. chug… high notes chug for eighty goddamn minutes. Vildhjarta sounds like if Humanity’s Last Breath (a band I love) were on quaaludes.

MÅSSTADEN UNDER VATTEN sent me into a tailspin. It had been a long time since I’d spun Vildjharta’s first album, 2011’s MÅSSTADEN, and I began questioning if they were ever any good at all. Sure, they used to be a bit of a meme band in the metal community with all of the THALL stuff, but they had something going for them. Right? Just to make sure I wasn’t crazy, I did relisten to MÅSSTADEN and yeah, that album is still quite good. It’s groovy, it’s playful… So what the hell happened? It’s not like nostalgia was hooked into my pleasure receptors in substitute for genuine enjoyment while listening—that album was never foundational for me. I’m sad to say that over the last decade of doing nothing, Vildhjarta has transformed into suck incarnate.

Maybe I’m being needlessly mean, but it’s only because Vildhjarta is capable of being so much better. The fact is, if the songs from MÅSSTADEN UNDER VATTEN were presented to me piecemeal over a playlist, I wouldn’t suddenly shrivel in revilement when one of them came on. Most of these tracks are fine, and some even have genuinely great moments. But listening to the album as a whole is a dreary endurance test, and by the time the album gets to the interminable seven minute long “vagabond,” I’m ready for someone to press my testicles flat with a hot iron just to wake me up. The choppy guitar rhythms, the ambient strings, the chugging, the abused china cymbal—it all becomes an emotionless sludge. It’s fitting the title translates to “Seagull Town Under Water” because this album certainly does make me feel like I’m drowning… Drowning in all of the chugging I have to endure.

One of those aforementioned genuinely great moments comes on the instrumental track “phantom assassin,” and I’m livid about it because the first minute is dull ambiance with some attempted jazz thrown in, then out of nowhere comes a wildly inventive set of spastic riffs, only for it to be drowned out by that same old chugging. The album is filled with little moments where just a bit of light will shine through the dull, overcast gray, like the opening of “toxin,” before being smothered by the same dull gray chug… chug… chug…

What really irks me about this album isn’t just that I find it so boring, but that I’m struggling to put my finger on what exactly the missing ingredient is between this album and MÅSSTADEN. They’re still utilizing many of the same techniques, but now a decade later they fall completely flat. Why? The best I can come up with is a lack of momentum. While Vildhjarta have always done funky things with regards to pacing, time signatures, and tempo, the songs on MÅSSTADEN don’t constantly undercut themselves by dropping the momentum. Yes, they did always do that thing where the sound drops out and suddenly we’re doing something completely different when we come back, but it still felt like an extrapolation on what came before. Moreover, the lead-up and the change were both compelling, so cutting away didn’t feel like a buzzkill or a “why is this suddenly good?” moment. “penny royal poison” might be the best song on MÅSSTADEN UNDER VATTEN purely because it actually sustains momentum through the whole song. It’s unfortunate that Vildhjarta’s long-awaited return turned out this way. But if they’re back for good, perhaps now the pressure’s off and the next effort will be more interesting. 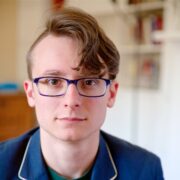