Archy Marshall soundtracked many a lonesome night for my underclassmen self. Our parasocial relationship consisted solely of perceived solidarity about the darker sides of being a young adult. I come to you now with some distance, as a nearly fully-developed human with thoughts on King Krule’s latest outing: the pre-quarantine live album, YOU HEAT ME UP, YOU COOL ME DOWN.

There’s tragedy in COVID enveloping the world in its unforgiving grasp at the dawn of such a musical milestone for Archy. In the year leading up to his third full-length effort, MAN ALIVE!, drastic fluctuations characterized Archy’s life, as he lost loved ones only months before the birth of his daughter in 2019. Like every King Krule album before it, it was made at night—if the studio mixes of King Krule’s discography are for dimly lit back-alleys, his latest live album YOU HEAT ME UP, YOU COOL ME DOWN is twilight’s trench coat. Young adulthood has the 27-year-old striving to trade cigarettes, weed, and gloomy Southwark, London for fatherhood and more chilled-out pleasures. Thankfully, the trademark grime of Archy’s production has stuck around. The record was recorded across several European shows, from Amsterdam to Paris, mere weeks before lockdown. Given the birth of his daughter and the headspace your late-20s bring about, Archy’s narratorial croon is understandably coming from a different place—a born-again optimist recounting the spectres of yesteryear.

With the knowledge of his newfound peace, hearing Archy mainline the bile of his early discography into your ear canal is twice as cathartic as one might imagine. The LP features songs from across all of King Krule’s full-length releases, beginning with the reflective throwback “Out Getting Ribs,” a track originally released on House Anxiety in 2010 when Archy was still recording under the moniker Zoo Kid, while “Stoned Again” has all the intensity of the studio recording with a dash of amped-up improvisation only a live set can produce. Ignacio Salvadores and his baritone sax shine through in the outro, as he does consistently throughout the 17-song tracklist.

The middle chunk of live renditions propel a bright radioactive hue into a stellar last quarter of the project. “Please Complete Thee” is filled with gentle saxophone crescendos that begin and die off at rhythmic sweet spots, keeping Krule’s isolation and unrequited love bubbling to the surface before calmly receding. Harsh dynamics rule on this record, and work to great emotional resonance, with seamless transitions between tracks and mid-song breaks that command your attention. “Out Getting Ribs” flows a mighty river into “Emergency Blimp,” with feedback that launches the listener into the broadside of an angsty mountain.

The album concludes with “Easy Easy,” a nostalgic bookend to Archy’s previous chapter. This time, there are new beginnings on the horizon for Mr. Marshall. The crowd is joyous, and The King and his guitar oblige with their muted strums. There’s a spunk to Archy and his bandmates that make this live feat particularly powerful. In our current dark state of affairs, we can only hope that this energy bleeds over into Archy’s life and his next project. 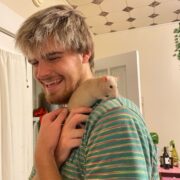