In the horror genre, the works of manga author Junji Ito conjure up a lot of feelings for a lot of people.  For some, it is an association with the grotesque, of upsetting anatomy, stark shadows, and uncanny detail. For others, it is an encroaching dread, a reluctance to turn the page and see what new terror lies in wait. And for others still, it is a state of excitement, an eagerness to embrace the strange, dark world the man’s created over the years and simply enjoy the ride. Because with Junji Ito, you never really know how easily, or drastically, things can fly off the rails. Enter WORLD OF HORROR, an Early Access, 1-bit indie title that not only brings Ito’s works to life in a first for the medium, but takes the unpredictable nature of his twisted tales and extrapolates it to its most logical, video-game-y conclusion: an old-school Choose Your Own Adventure. 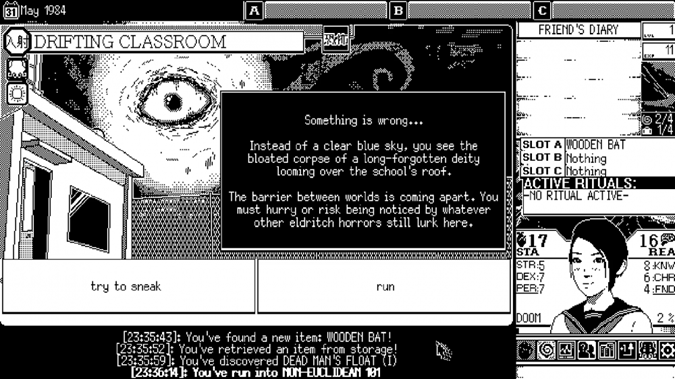 Yog Sothoth apparently has a thing for schoolgirls

Conceptually, WORLD OF HORROR is pretty straightforward: turns out the quaint little town you call home just so happens to be the favorite stomping grounds of a destructive Old God, and it’s your job to somehow find a way to prevent it from destroying humanity before the “DOOM” meter reaches 100%. To do so, you must take control of one out of a handful of strapping young teen archetypes, each with different stats and starting quirks, and traipse your way through five randomly-selected mysteries that will let you gather the tools, allies, and keys you need in order to postpone humanity’s inevitable destruction.

From the start-up sequence alone, it’s evident how clearly the game aims to immerse players in a very different kind of mindset than modern games have conditioned us to, eliciting nostalgia purely from its presentation. From the slight wave in the Hypercard graphics, eerie chiptunes, and obnoxiously loud CRT bootup, to the palette selection and deliberately obtuse interface, WORLD OF HORROR seeks to emulate the antique text adventure aesthetic of the early 1980s. And for a project effectively made by a single person, Polish indie dev Panstasz does a reputable job at replicating the era’s look and feel with (figurative) flying colors.

More than that, though, the dated style of the text-based adventure sim ends up supplementing the game’s literary influence very nicely, providing the perfect vehicle for getting that Junji Ito style across to the player in as digestible a way as possible. Trying to communicate the more unsettling elements of Ito’s artistry through another medium is by no means an easy task (see: Crunchyroll’s middling anime adaptation), but the CYOA’s card-based format sidesteps the adaptational barrier by effectively being the virtual equivalent of a comic book, in so far as it lets you linger on any block of text or image as long as you need to, before you inevitably need to “turn the page” to see what happens next. It’s definitely not the most sophisticated system for an edge-of-your-seat scarefest, but it’s great for enhancing the atmosphere and getting down that methodical creep factor the game’s manga inspiration brings to the table. 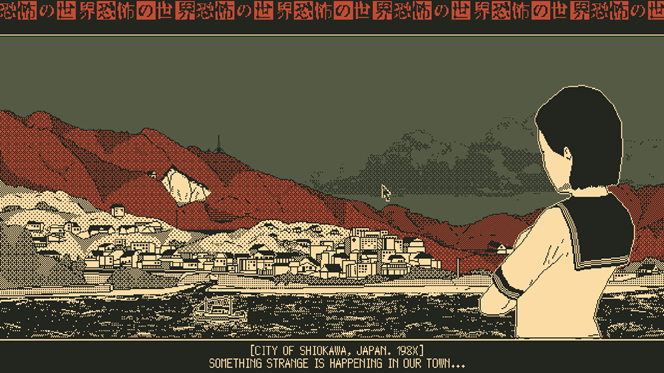 “Major UZUMAKI vibes all up in this bitch” – That girl, probably

Speaking of creep factor, let’s talk gameplay. For the most part, WORLD OF HORROR’s game cycle is defined by the mysteries your character is tasked to solve, which typically play out by simply clicking the part of town the game highlights, dealing with whatever random event or skill check is selected for you to face, and then seeing where the trail leads you while the larger story unfolds and the DOOM inches forward. And while you could always stick to the script to finish each mystery as quickly as possible and try limiting the encroaching madness plaguing your town, deciding to go off exploring and satiating your curiosity is the much more rewarding experience, especially when it might mean getting a weapon to defend yourself or meeting a potential different end to one of your investigations.

The selection of mysteries themselves all bring a good variety of storytelling into the mix on their own: an insane janitor trying to construct their own mermaid, an unnatural coma epidemic, being stuck overnight in a mansion for a creepy midnight vigil. But it’s all the micro-level instances and small decisions in between that really end up driving the tension and making the run-around feel special. Should you keep the book bound in human skin at the risk of losing your Reason stat, or burn it and potentially raise the DOOM meter? Is it worth it to confront the person stalking you and risk them attacking, or pretend to ignore them and hope they won’t end up causing you problems in the long run? Playing your way through WORLD OF HORROR feels like rifling through a collection of personal horror-themed vignettes, and honestly, I’m all for it.

However, the biggest draw to the game, and consequently the bit that gives the deceptively small-scale title its longevity, is the modularity of the experience. As a roguelite, every iteration of your adventure almost always changes things up and bring new twists to the play cycle, whether it’s the Old God you’ll be aiming to stop, which of the (currently) dozen-or-so mysteries are selected for you to complete, or what spooky encounters get put on the docket for you to contend with while you investigate around town. In the same vein, the game’s roguelite status means that the game gets progressively more interesting the more you play, unlocking extra combat encounters, events, gameplay choices, and even characters to play as for all your future runs with each milestone you hit. And with the average run taking anywhere from 30-60 minutes (assuming you’re able to survive long enough to finish it), the feedback loop for jumping right back into the spookfest to see more, whether it’s to uncover a different outcome to a mystery or push the limit of your character’s sanity, is masochistically addictive.

Unfortunately, the bandage didn’t quite “cut it” this time around

Inevitably, the repetition will set in and the intensity of the scares will drop off once you get a feel for each mystery’s structure. That’s ultimately the fate of any horror media you decide to invest in. But in the 30+ hours that I’ve sunk so far into this Ito-ian nightmare, the drive to keep experimenting and discovering everything the game had to offer became equally as entertaining as the horrors that preceded it. You get into a groove, with the satisfaction of figuring out the correct sequence to achieve a particular ending becoming just as enjoyable as seeing just how many creative ways I could deliberately throw myself into peril. Even when the things lurking in the dark cease making you shake in fear, the game continues to keep you engaged. And for an indie project that’s still in Early Access, that’s exceedingly impressive.

For as cliche as it sounds, WORLD OF HORROR genuinely feels unlike any other horror game out on the market today, even in its unfinished state. It’s a game that’s more than just a love letter to the world of Junji Ito and ’80s nostalgia; it’s a dense, unsettling, and unnaturally authentic experience, a testament to the versatility of the horror genre. This game was made for me, and if you give yourself willingly to the macabre reality that WORLD OF HORROR offers, maybe you’ll find your spot on the cliff, too.