If you’re anything like me, you get a little tired of all the forced merrymaking and cheer that nowadays starts around Thanksgiving. After the family’s gone to bed and the roster of Christmas classics are put aside (my family traditionally watches ELF, and yes it is a great selection and I will hear nothing otherwise, thank you), perhaps you’re looking for something seasonal, but a little less wholesome. Well, dear reader, I’ve prepared the ideal list of holiday horror films for you, paired with the amount of eggnog you’ll have needed to imbibe to appreciate to the maximum degree. 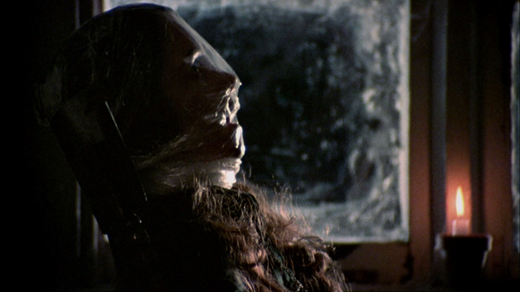 Glasses of Eggnog: One

Simply the best, and worth being as sober as possible for, as this is the strongest selection from a “film” perspective on this list! BLACK CHRISTMAS is relatively unassuming—many know it exists, although far fewer have actually seen it. Telling the tale of a sorority house terrified by a deranged killer during the holiday season, BLACK CHRISTMAS is ingeniously effective for several reasons. First of all, it’s as equally proficient as a mystery-thriller as it is a proto-slasher, as a large portion of the narrative involves the police and sorority girls forced to work together and overcome their respective incompetencies in order to get to the bottom of the seasonal slayings. In addition, considering the time in which it was made, it subverts horror tropes before they were established and aggressively codified in the genre heyday that was to follow; the girls aren’t punished for their sexuality, the “good one” is the first one to die, and the true identity of the killer is never exposed apart from the fact that his name is “Billy,” his backstory and motivation only partially delivered through utterly unnerving phone calls to the sorority house. On the topic of the phone calls: holy shit! Somewhere between the dialogue and the acting they managed to make such an innocuous horror trope one of the most disturbing things ever committed to screen. Deftly commanding an unrepentant nihilism and acerbic take on time-honored traditions, a notable layer of humor that deploys its handful of laughs at the perfect moments, and a stellar soundtrack to boot, BLACK CHRISTMAS is well worth the watch this upcoming Christmas season if you missed it back during Halloween. 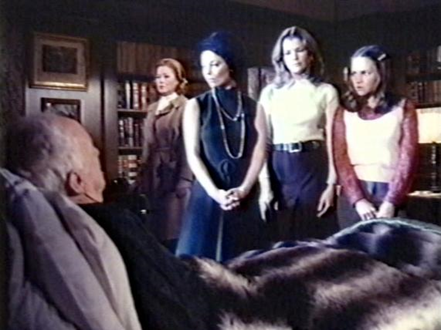 HOME FOR THE HOLIDAYS

One that often goes unsung, I’m here to shed light on what is perhaps the holiday season’s most hidden gem. Made for ABC (!) in 1972, this short, sordid, and not-so-sweet telefilm should already have your interest piqued considering it stars a young Sally Field and Jessica Walter in the nascent days of their careers. Featuring an excellent premise where a father invites his four daughters home for Christmas, only to tell them that their stepmother is in the process of poisoning him and must be stopped at any costs, HOME FOR THE HOLIDAYS is far more tense and well-written than it has any right to be, all scenes of chair-gripping suspense punctuated by whoever’s in a yellow raincoat picking the girls off one-by-one. With practically every scene oozing with melodrama and heightened emotion like a retro-fitted Ryan Murphy (those ZOOMS!), the two glasses of eggnog you’ve had contributing to your investment in the soapier elements, HOME FOR THE HOLIDAYS is also impressively and deliciously bitchy, our four queens biting at and verbally laying into each other like it’s nobody’s business. With a killer you wouldn’t come close to suspecting and several contentious candidates for our whodunit, it’s not going to have you leave the lights on, but for those that like their horror strongly on the side of suspense, it’s worth tracking down on YouTube.

Believe it or not, I don’t have much of a taste for low-budget shlock, so I was wary of taking CHRISTMAS EVIL for a spin considering its very-’80s, very-shoestring trappings. But any lack of production value is made up for by the three glasses of eggnog coursing through your veins, so bring it on while I’m too warm and fuzzy to protest! Regardless, color me surprised, because Lewis Jackson’s sole film of note is nothing if not what you’d expect it to be. While technically a slasher, CHRISTMAS EVIL is consistently impressive for how psychologically harrowing it is, one of the more unsettling portrayals of a man’s descent into insanity I’ve come across. Somewhere in the oppressive decor, relentless jingles, and commercialized smiles of Christmas rests a manic, ominous energy, and Harry’s slow unraveling will be familiar to anyone who’s been stuck in a retail line for a little too long on Christmas Eve. What’s more, Harry remains a sympathetic character throughout; while the inciting incident is a good bit of silly, if entertaining, ‘80s excess, to some degree we can’t blame him for his rampage based on the abuse he suffers at the hands of his employers and the complete lack of respect he commands. The kill effects in question show the film’s limitations and won’t titillate anyone who came of age in the abattoir of the early aughts, but it’s scenes such as Harry’s unhinged appearance at a hospital and Christmas party that truly set this apart from its innumerable peers. 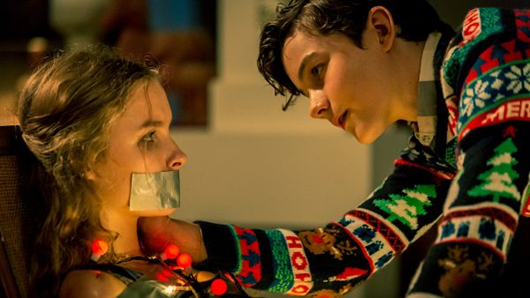 Alright, at this point of the evening I’ve drunk enough that I’m jonesing for a bona fide modern horror film, something mean-spirited that’s going to get under my skin. Both far better and far more disturbing than it has any right to be, BETTER WATCH OUT deserves to come with a few trigger warnings, but features a descent into depravity both upsetting and unexpected enough to stick with you. Admittedly, most of the film’s effect lays with the twist, which is better going in completely blind on. Nevertheless, going from something like HOME ALONE to something rapidly careening towards FUNNY GAMES is a feat Peckover manages to pull off with flying colors, even if the more torturous elements, psychological or otherwise, are sure to leave you squirm. But, perhaps if even just for the warm Christmas lights sprinkled throughout the film, things never feel as relentlessly nihilistic and bleak as an Eli Roth joint, and the film’s sparing, but effective, moment of levity are to be applauded. As history shows again and again, there’s nothing quite as frightening as an entitled white man, and BETTER WATCH OUT’s surprisingly unflinching exploration of what makes a burgeoning sociopath tick is another mark in its favor. If you want to feel like taking a unseasonably cold shower, look no further. 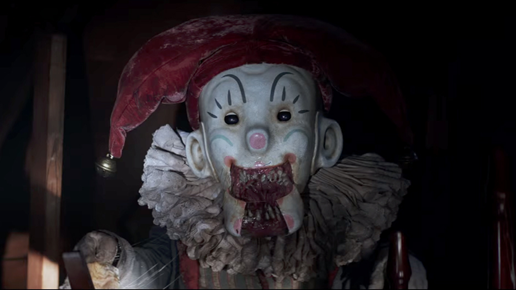 Now that the vision’s getting pretty merry and bright on glass number five, I’m looking for something low-stakes, colorful, and fun. I was among the haters when this dropped, but whether it be the softening of the years, the fact I rediscovered TRICK ‘R TREAT during Halloween 2017 and was impressed with how well it stood up, or the five glasses of eggnog in my system, Michael Dougherty’s flash-in-the-pan tale of a squabbling family visited by the shadow of Saint Nicholas is worth a rewatch. Fans of Doughtery’s cartoon-like realism will find much to enjoy here, with impressive creature effects courtesy of Weta Workshop that feel fantastical without ever plunging things into the depths of the uncanny valley, and the film’s surprisingly dark penchant for violence push the PG-13 ratings just about as far as it can go. Led by Adam Scott and a pre-HEREDITARY Toni Collette that still features her now-signature screams and grimaces, the film benefits from a tight script that keeps familial tensions high, regardless of when Krampus and his deadly bag of critters come town. Funny when it needs to be, gory enough to hearken back to the family-adjacent horror fare of the ‘80s, and ultimately featuring a heartwarming message of coming together for the Christmas season, albeit in a non-traditional manner, I’m not sure what was in the water in 2015 that caused us to shrug at this one, but this crosses the finish line with some charm. 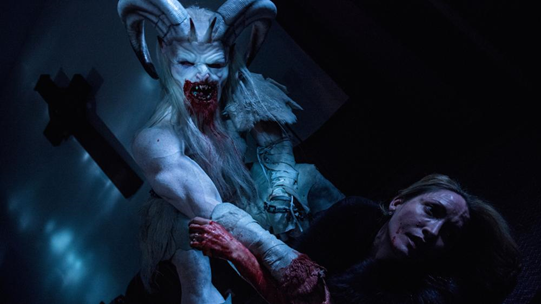 Now listen up ya big jabronies, of course this isn’t good. But you know, if you’re at the part of the evening where you’re absolutely soused, this is still pretty damn fun. Look, I have a soft spot for anthology films. It’s conceptually nice to get a few bite-sized takes on a larger overarching theme, and the ebbs and flows in quality between shorts are practically a required facet of the medium. Now are there ebbs and flows present in A CHRISTMAS HORROR STORY? Of course! But things are thankfully never outright dismal, with a by-the-numbers Krampus tale the only truly hum-drum part of the festivities. Apart from that we’ve got a possession tale that’s charming in its shlock, a changeling story that’s legitimately inventive and surprisingly dark, featuring an unexpected Oedipal take on the mythos and focusing on a creature horror often leaves behind, and a gleefully stupid, zombified gore take on Santa’s workshop, where Old Saint Nick has to brutally murder his infected employees before facing off in a big, bruising beatdown with Krampus at the end. Reinvent the wheel it does not, but you’ve got a drunk William Shatner doing all of the interstitials as DJ Dangerous Dan, and that’s something most serious cinema does not have. Watch with friends, take the piss, and make merry!

A Very Merry-Go-Round: SCROOGED: How to Update a Christmas Classic

A Very Merry-Go-Round: Put on Your Yarmulke, Adam Sandler and Hanukkah