There are few things in this world I would refer to as an “unfettered delight.” The Paddington films. Ween’s “Ocean Man.” A dog I met in Philadelphia a few weeks ago named Skunk. But apart from those sanctimonious three, it wasn’t until Netflix’s AGGRETSUKO that I found cause to use the descriptor again. Hopefully you’ve at least heard of Sanrio and Netflix’s unlikely collaboration by now, telling the tale of Retsuko, an anthropomorphic, 25-year-old red panda buried in a soulless accounting job. It is rare to find something that so holistically and confidently grasps the anxieties and struggles of those of us on the wrong side of “young adult.” Whip-smart, whimsically animated, laugh-out-loud funny (with hefty use of visual humor, to boot), AGGRETSUKO is also one of the most effortlessly empowering feminist outings of recent memory: a thorough dressing-down of all the inequities of the workplace, delivered through a winking sardonicism and strained smile. In short, you should watch it. But if you paid attention to any of the promotional material, you’d be sure to remember the would-be “gimmick” of the show: that Retsuko has a penchant for letting out her frustrations via death metal therapy. Thankfully, in addition to all that’s mentioned above, AGGRETSUKO simultaneously exists as metal’s strongest shot at an increased mainstream acceptance: a faithful, loving, and just-self-aware-enough presentation of one of the most historically reviled genres of music around.

Ah, metal. Where to begin? I don’t think I need to offer any outside proof for the fact that there are more people on this Earth that dislike metal than those who like it. Unless you’re maybe four of the writers from the Crossfader music section, it’s probably a top contender for the “except” portion of “Oh, I like all kinds of music, except _____.” It’s not entirely undeserved. While I think there’s a lot more artistry and beauty present in the genre than many who approach it assume (boring, I know, but there’s really no better 101 than SUNBATHER for the nonbeliever), the music is loud, the culture is hyper-masculine and aggressive, and the conception of fans as tribalistic bullies isn’t entirely off the mark. But, at the end of the day I am nothing other than a fan, and all of this is to say that the way in which AGGRETSUKO posits the music in a colorful, lighthearted, dare I say positive light is certainly something to pay attention to. Metal is a genre that can only ever be subjective, but is time and time again a method of release for its adherents, whether it’s used as a soundtrack for the treadmill, a pounding, pummelling means of clearing out the headspace, or a misanthropic missive reserved for another night alone. Retsuko uses the music as a way through which to communicate her innermost expressions of rage, a conduit for release from the steadily building pressure-cooker of the modern office environment. Frustration at being an unsatisfied millennial siphoned off into a job to pay the rent; frustration at the lack of value or praise her endeavors seem to engender among her superiors; frustration at the daft, oppressive male figures that take up space in the office and look down at her deserving and qualified efforts as something lesser. It’s important that the show offers metal as a way to access, process, and release emotions that would otherwise manifest themselves in less savory avenues. Instead of something to be feared or derised, metal is something Retsuko could not face the day without, Retsuko ultimately turning down the romance that was bubbling with Out of Pocket Prince, a potential love interest, after learning that he does not share her musical sensibilities. What’s more, Retsuko ends up growing as a character when she learns to share her passion with her coworkers as the season goes on, episode five literally containing a scene of Retsuko extolling the virtues of being true to yourself before unleashing a burner of a karaoke song, her newfound friends entirely enraptured and curious as to how to properly scream along. To be fair, this is usually what’s going through my head as well

But the way in and avenues by which the music is presented and displayed is just as, if not more important than the benefits it’s demonstrated to have. There’s no way around the fact that perhaps the genre needs an updated PR boost, and anything this bright and outwardly accessible is much more gripping when juxtaposed with its music of choice. Yes, METALOCALYPSE was more traditionally faithful to what the actual practitioners and worshipers of metal historically look like, but while a fine show, it’s a little too inside-baseball to be anything more than a cult classic. At the end of the day, an adorable Sanrio character screaming along to her inner demons is going to pique the interest of a much larger swath of the population than Dethklok ever could. See, nowhere near as approachable

That said, I’ll acknowledge once again that AGGRETSUKO’s use of metal could be construed as gimmicky considering all of the above, but the fact is that the metal in question is actually pretty damn good! Sung and presumably oversaw by series creator Rarecho, it’s clear that the input of legitimate fans is always on the table. There are a wide variety of subgenres and creative influences sprinkled in, from the more galloping, riff-heavy interpolation of thrash, to the fuzzed-out, high-pitched wailing of black metal, to the uncompromising, guttural mania of grindcore. What’s more, the music takes fairly daring steps, regularly paring off the unrepenting onslaught of the blast-beat drumming with chunky guitars that are playing rhythm-predicated melody lines, contributing to a combination of accessibility and complexity that we don’t even regularly see in the genre at large. That’s not to mention the vocals themselves, which are well-mixed and well-enunciated despite skewing towards higher pitches, offering a sense of hoarse desperation without losing any power. Take for instance Retsuko’s karaoke performance in episode seven at the company drinking party: starting off with a furious Hellcat scream, beatdown-derived riffs welcome us into the ring before transitioning to a nearly deathcore-adjacent vocal performance bolstered by bona fide dueling melody lines and furious rapid-fire drumming. I’m continually impressed at how much slight, but no less noticeable, differentiation AGGRETSUKO crams into its musical asides. There’s always something fresh to get you head-banging, from never-recycled riffs to new lyrics accompanying each appearance of the music.

AGGRETSUKO deserves commendation for expanding the demographic reach of metal on the same token. It’s no secret that metal has a problem when it comes to diversity and inclusion. Of course there are examples otherwise: the traditional doom/death ‘90s trio Mythic, the polished revenge fantasies of Castrator, or the lo-fi aural chaos of Nuclear Death. But it’s long been a genre presumed to “not be for girls,” a notion that the violently misogynistic extreme subgenres and general dismissal of female fans as having something to prove do nothing to dispel, nevermind the horrifying comments that get left on message boards every day. As such, the fact that AGGRETSUKO portrays a hard-working, millennial woman of agency consciously and willfully positing metal as her preferred music of choice is important! Not only does this show any potential non-white dude fan that that there’s a place for them in the fandom, but it also reclaims the genre by focusing on the heartfelt struggles of a working woman and how she uses the music to her advantage, a direct opposition to the examples of the genre that treat women as objects to be used and abused. From where I’m standing, and I’m sure some mouthbreather on the internet will disagree, AGGRETSUKO does the triple duty of opening up the genre to appreciation and consideration from a more diverse base, implicitly demanding a greater sense of equality in the fandom without sacrificing the quality of the music, and suggesting that society’s assumption that all metal fans are lowest common denominator knuckle-draggers is false. How can that be a bad thing? Not a lowest common denominator knuckle-dragger

So, watch AGGRETSUKO. It’s a distinct, masterfully executed, and smoothly progressive step forward for animation that’s a sure-fire hit for EOY recognition. With a varied cast of strong female characters, an intimate and layered look at the anxieties of a professional young woman, and a no-holds-barred take-down of toxic masculinity in the workplace, live action television could stand to learn something from it. But, as hopefully this feature has suggested, it’s also an important “music” story, and one that ends up more daring and boundary-pushing than can be expected from its advertising alone. AGGRETSUKO gets its audience to give music they’ve never explored before a try, an endeavor near and dear to my heart. While it’s certainly not beholden to genre tradition, it’s 2018 and it’s high time we broke down some of the barriers that make certain music inaccessible to those who are not straight, white men. AGGRETSUKO can lead the charge and should be applauded for it. 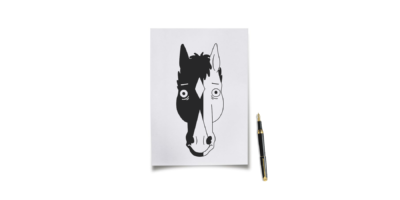