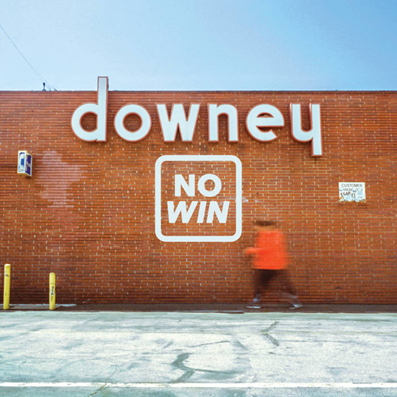 An unassuming group of young men whose stage presence is the correct cocktail of possessed rockstar, weekend warrior musician, and approachable-yet-struggling millennial, NO WIN’s charm is in their musical ability to shrug, move on, and tap into just a smidge of indie rock underdog energy. Beyond how tight and clean the songs are, you’d never guess that DOWNEY, the Los Angeles group’s spunky debut, was actually recorded by former members of FIDLAR, Kind Of Like Spitting, Joyce Manor, and mixed by John Goodmanson, producer of such institutions as Sleater-Kinney and Blonde Readhead, but only because that’d make too much sense. Certainly NO WIN, the brainchild and semi-solo project of former FIDLAR skate punk Danny Nogueiras, are no one’s first thought when considering great up-and-coming indie rock bands (including, in fairness, this writer), but even considering the thought makes them all the more endearing when listening to the album. One run through DOWNEY will certainly have you assessing the notion—tight melodies, punchy choruses, and just enough of that underdog tenacity in the lyrics to make you want to root for these guys (Nogueiras’ learned lessons from FIDLAR are clear in that regard). These songs are bonafide bops, the kind that come when the aforementioned set of experience and sound is allowed to cook independently, and it leads to ‘90s closing credit anthems like “Being Teen,” or rippers like “Outsource” or “Vision,” that sonically hit sunny touchpoints like Fountains of Wayne or Third Eye Blind, or even Juliana Hatfield. And Nogueiras nails the balance between heartbreak and heartfelt really well (the in-the-moment romance of “Shelley Duvall” lives and dies by that wire-act in a brilliant way). Highlight “2 Real” captures so much of the group’s varied range, from the insatiable highs of the blinding guitar solo to a chorus that is a grinning send-up of the poetic beauty found in being lonely and young and reckless. Somewhere NO WIN are a high schooler’s favorite band, and DOWNEY is their gateway to punk and indie rock and heartbreak a future of underdog spunk, and that’s a beautiful thing. Give the album a listen over on Bandcamp. [CJ Simonson] 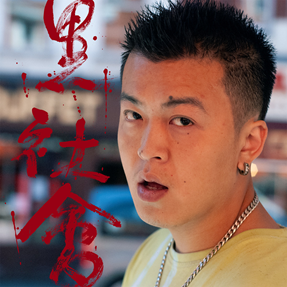 What will no doubt go down as one of 2019’s most polarizing and controversial releases, at least if you’re of the Tiny Mix Tapes and internet forum set, Triad God’s 黑社會 TRIAD is frustrating, confounding, almost entirely in Cantonese, and just as likely to be despised as lauded. In short, it’s the kind of thing yer dear ol’ Editor-in-Chief lives for. 黑社會 TRIAD sees the reclusive, London-based Triad God turn in his second collaboration with producer Palmistry, the first we’ve officially heard from him since 2012’s NXB and the first we’ve heard from him at all, officially or otherwise, in nearly four years. Perhaps most readily compared to Lil B’s infamous 2010 “studio debut,” the New Age, spoken word-indebted RAIN IN ENGLAND, cloud rap is only used as the vaguest of orientation points here. A hypnotic, crepuscular soliloquy of sparse, ethereal soundscapes and Triad God’s delivery style, which, more often than not, comes across as audiobook intoning, 黑社會 TRIAD’s overall effect is one pervasive melancholy, one that manages to simultaneously feel deep and sketched-in at the same time, a sort of schizophrenic end-of-life simulation effect in the same general ballpark as Swedish producer Varg’s EVANESCENCE (A LOVE LETTER). Often relaxing and regularly haunting, it’s hard to determine exactly what 黑社會 TRIAD aims to be. Is this some sort of commentary on globalization and internet culture, as hinted by the scant English lyrics that pop up? Is it just an intentionally anonymous pet project that the internet hype cycles have signal-boosted to be something more? In a world that put Triad God into the consciousness at the exact same time acts such as James Ferraro and the S A D B O Y S were blowing up, why didn’t he attain the same level of online omnipresence? None of these questions are answered, but one thing’s for certain, Triad God sounds like nobody else making music this year, and that alone earns 黑社會 TRIAD a listen in my book. [Thomas Seraydarian]