My last year of gaming, like much of the world, was overly consumed by battle royales—to be specific, FORTNITE, and then of course APEX LEGENDS. The combination of casual accessibility and mindless gameplay, not to mention the illusion of potential mastery that comes with the battle royale format, made it a pretty easy game to pick up and play for small bursts. Both releases figured out a way to take the simplicity and promise of mobile gaming (ease of play, simple mechanics, free) and bring it to the big leagues and, well, if you’re reading this article, I likely don’t have to tell you any of this.

Truthfully, GEARS 5 is the first time I’ve deliberately put either FORTNITE or APEX LEGENDS down in the past year. While it’s the marquee game in Microsoft’s release calendar this year, it fundamentally required an overhaul of the way I was actually thinking about games. Having been a fan of the franchise since the release of the original (and being pretty good at it to boot), the controls and instincts rushed back to me immediately, but something was… different. Off, even. I quickly realized that an entire year of playing battle royales, where the action happened with a blink-and-you’ll-miss-it breakneck pace, not to mention the immediate ease of simply accessing the games, was making jumping into the GEARS 5 online multiplayer difficult. 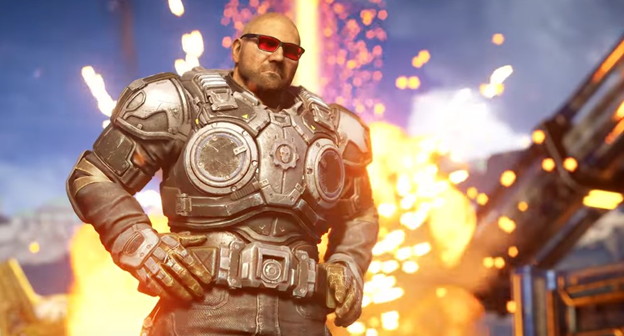 When despite trying everything to make a GEARS OF WAR movie happen, you have to settle with being a playable character.

GEARS 5 is slow. In fairness, it’s always been slow—the characters lumber around, huge bodies that have the ability to bullrush but still dive around with a kind of slow-motion tumble. The mechanics and gravity of the game are, and always have been, grounded. But in GEARS 5 especially the characters feel somewhat clunky, as though the The Coalition and Xbox Game Studios have added weight to the characters and made their physical movements heavier as compared to GEARS OF WAR 4. The resulting gameplay feels like it moves without the same briskness; certainly the game modes and game itself were designed around this movement from the start, but somehow both in contrast to the current battle royale fad and to the franchise itself, it doesn’t add up to the same kind of immediately coherent style of play, and that can at times be frustrating in how unhurried and ungratifying the experience can feel.

That ultimately translates to a slowed-down pace in multiplayer matches that’s as sluggish as its characters, particularly in versus modes like Execution, where with only one life it behooves a player to be patient, and Guardian, with classic “kill the leader”-style play that’s at its best when it unfolds with a more cat-and-mouse game script. Even if that pace had always been the franchise’s calling card in comparison to some of Microsoft’s other A-list titles (read: HALO), and Team Deathmatch and King of the Hill remain intense and dizzying as ever during their peaks, the actual feeling of game, particularly if you want to be good, should be more methodical than any battle royale that’s currently on the market, already a methodology that’s going to be hard to access for younger users. Playing in the wake of FORTNITE, especially where split-second building often makes or breaks your ability to play at a high level, the actual action and firefights of GEARS 5 can feel underwhelming until you’ve locked yourself in.

But all of this is to say nothing of the other slowest element of GEARS 5: The game lobbies. No doubt this is something that will be speed up over updates, but just getting into a ranked match feels exhaustive, a far cry from the two-clicks-and-you’re-in ease of FORTNITE or even the comparatively quick and involved APEX. Rather than waiting for you the user to decide when you’re done playing multiplayer, in ranked matches the game will demand you alert it that you’re still interested in a new match, GEARS 5’s version of Netflix’s “Are You Still Watching?” function, but frustratingly used after every single game. Even just getting into games can be a frustrating multi-minute ordeal that, on the wrong night, can take seven-to-eight minutes to play games that move far more quicker. 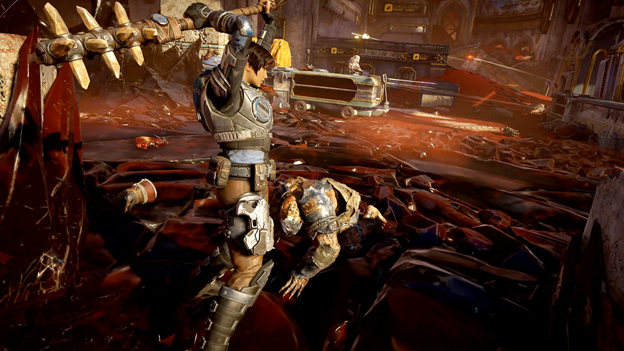 If you thought curb stomps were too quaint, this thing literally makes bodies explode on screen. Rated M for Mature.

The big addition to the Gears of War roster is Escape, another multiplayer mode meant to pit a team of players against A.I. similar to the groundbreaking Horde mode they introduced back in GEARS OF WAR 2. Acting as a kind of mini-level speed run, your goal becomes to fight a ticking clock to escape a hive of enemies, and depending on the right difficulty, the resulting style of play can be very dependent on your understanding of the methodical run-and-cover system, not to mention your ability to master each weapon. The ticking clock element of it (a gas leak is slowly forcing you forward) makes for quick play, but unlike Horde mode, which rages on for 50 levels and is a large time investment, there is rarely much satisfaction from beating the easier difficulties of the weekly updated levels. Whether team-based time runs can possibly deliver the competitive thrill of one vs. 100 stakes is yet to be seen, but currently the answer is no.

Escape is filled with promise, but like other facets of the multiplayer experience, it feels like a wait-and-see. The biggest question mark weeks into its release remains how much the community-driven component of the map building and sharing in this mode will take off. Currently in beta mode, it has a long way to go before it becomes a reliable source for unique, user-created content. Here especially, the lack of speediness with which games can be found and created is felt—trying to jump into a previously featured user-made map is impossible given the mode requires three players, and those players would need to be exploring this section of Escape at the same time—frequently you’ll click into a map to see if any games are looking for players and they won’t exist. For this review specifically I spent half-an-hour trying to play simply one (1) user-generated level and never successfully got beyond joining the lobby with one other person (the game will not start until a third joins you). The reliance on three people to play through the Escape levels is across the board a hindrance, as the games don’t have the ability to scale in difficulty with the number of players; certainly more than even Horde mode (which features five players to Escape’s three), the skill of the players opposite you is key to succeeding against the harder difficulties, and that’s something that will be hard to counterbalance from game to game.

GEARS 5 is still Gears of War, but the franchise has certainly seen better days, this installment feeling as much a holdover relic of the 360 as ever. It’s hard to make an old dog learn new tricks, and fortunately the tricks that make up this franchise remain mostly singular. But as games continues to become faster and faster across the board, it’s hard to tell if it’s commendable or stupid that this style of play has nearly doubled down in its disciplined yet dawdling movement. Maybe it’s both.