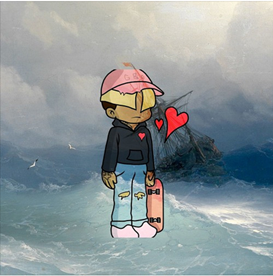 In a year where emo-rap is likely the most identifiable subgenre if you spend even the slightest amount of time exploring the scene, there’s no better time to get acquainted with Cold Hart’s 2017 release MARVELOUS MISADVENTURES OF COLDY. Released months before the original emo-rap flagship figure would meet his unfortunate demise, even if Lil Peep was the most household name of Gothboiclique while he was a part of it, Cold Hart always managed to stand out to me. Now it goes without saying that this is mood music, through and through, so context can tend to be key—probably not music for a sunny summer outing at the beach. But if you ever find yourself caught in your feelings on a cold night alone, MARVELOUS MISADVENTURES OF COLDY’s careful and considerate delivery of its themes of heartbreak, longing, and strikingly tender depictions of being swept up in love and its aftermath are something to rally around. Cold Hart is somewhat unique for avoiding some of the frayed desperation that other emo-rap can misstep its way into. Though making use of the requisite Drain Gang Auto-Tune, Cold Hart’s voice is actually quite sonorous and fleshed-out in its own right; combined with the oceanic bass and downtrodden production, which ends up effectively making use of both organic guitar lines that could commandeer a more traditional emo song in their own right (“Material Things,” “Black El Camino,” “Bedroom”) and standard electronic sadboi sheen, the result is quite hypnotic. Tracks such as the glacial emotional minefield of “Red” hearken back to GLUEE-era Bladee, and standout cuts like “Every Haunted Movie Takes Place in Massachusetts” evoke Peep and slowcore in equal measure. While Cold Hart would get more innovative with this year’s GOOD MORNING CRUEL WORLD, MARVELOUS MISADVENTURES OF COLDY is likely what I’d point to as a definitive release. Check it out on Bandcamp. [Thomas Seraydarian] 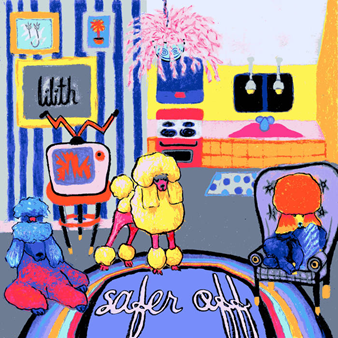 From the opening chords of “Vacation,” Lilith’s brand of indie rock is going to seem instantly familiar, that opening song fitting nicely at the summer break garage rock lunch table (are we still using that meme template? No?) with Charly Bliss, Potty Mouth, and Lisa Prank. And certainly that radiant, punkish, mid-July, bulletproof vigor carries the initial opening of “Vacation,” a head-bopping guitar jam that’s a bit angsty but still a lot of fun—singer Hannah Liuzzo has a fitting bit of a snarl when she delivers the words “you’re the enemy of every love you’ve suited.” But what follows on SAFER OFF is, well, safer, 10 degrees more withdrawn and melodic (think the more recent Field Mouse releases) than the initial rush in the opening track, and even that song’s guitar solo begins to recoil a bit. Truly, “Vacation” symbolizes the record’s immediate end-of-summer moment, and what follows can best be described as transitional autumnal energy, the Boston trio quickly revealing a first-day-of-school feel that is simultaneously a rush of sadness and hope. “Figure 1 Repeated” is a song about getaways sung from afar, working up the strength to get through a day (or month, or year) and the next run of songs, peaking with one of 2019’s best stare-out-the-window tracks in “Colder,” are filled with a familiar tired optimism. By the time we reach the final three songs, including the album’s two best cuts, the musically full “Decency,” with some amazing vocal harmonies, and the poppiest track, “C.O.Y.F.,” we see a sliver of light at the end of the tunnel, a sense of earned optimism across the record. While there are certainly flashes of a pop-punk brightness and that cheery summer spirit, for the most part, SAFER OFF is a fall record capturing the internalized monotony of the day-to-day that is missing from most coming-of-age narratives. Give SAFER OFF a listen over on Bandcamp. [CJ Simonson]