Today (3/20/20), all of the proceeds of anything purchased on Bandcamp go directly 100% back to artists. We pushed back our Wednesday Bandcamp Picks to Friday for the occasion, and supersized it with some awesome records, including a re-up from our own Blake Michelle of Lilith’s excellent debut which we covered in this section back in October. Give our entire archive of Bandcamp Picks a look over as well and consider buying some music or merch today. 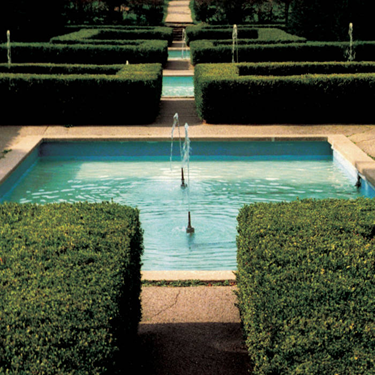 The title track on Ducks Unlimited’s GET BLEAK rings out like a long-lost Television Personalities’ cut. The band’s debut EP has drawn comparisons to everything from Belle and Sebastian to The Field Mice, of course, so go ahead and rack your brain for your own slice of jangle pop history and it’ll likely fit. Certainly much of the Flying Nun discography, not to mention the Go-Betweens, has been copped by artists like Rolling Blackouts Coastal Fever, but there’s something warmer and more lived-in with GET BLEAK, which is less invention and more imitation, so much so you’d be forgiven for hearing “Anhedonia” and believing it to be a long-lost relic. The best track on the four-song EP, though, is “Gleaming Spires,” a sprightly, dreamy slice of indie pop that bounces with a bit more vigor and personality than the group’s admittedly impeccable-sounding fanservice. The whole EP is a delightful reimagining of the past, and a sound more modern bands should be trying to explore. Give GET BLEAK a listen over on Bandcamp. [CJ Simonson] 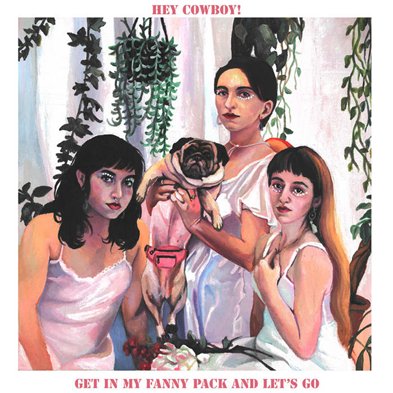 Hey Cowboy! – GET IN MY FANNY PACK AND LET’S GO

The great thing about an album name like that is that you’re pressing play regardless of what bullshit I write in this blurb. I mean, c’mon, “GET IN MY FANNY PACK AND LET’S GO” is such a playful, fun, fascinating title, why would you not just press play sight unheard. Fortunately when you do press play, what follows is fun and interesting enough to adequately live up to one of 2020’s most fun and interesting album titles, as Hey Cowboy! have the simple, captivating, synthy goods you’re seeking. The Austin threepiece create a spacious sound across GET IN MY FANNY PACK AND LET’S GO, combining cosmic synthesizers and effervescent vocal harmonies to complement a generally bare-bones, minimalist rhythm section. Songs like “Hello Mr. Nasty” or “Houses” are essentially stripped-down ‘50s pop songs that exchange the sock hop or diner jukebox aesthetic for an atmosphere-heavy, sleek sci-fi feel. There’s a strong affinity for artists like Cate Le Bon across this record, a song like “Detective Mr. Brown” in particular could be something Le Bon made with Tim Presely on 2018’s collaboration HIPPO LITE, but frequently Hey Cowboy! pivot away from more dizzying art rock and more into quieter, slowburn balladry. They leave the most musically complex cut on the album for last: “Zitty,” a closing-credits dance party that amps the bass part up to find a different kind of dance minute groove for three minutes. Hey Cowboy! brand themselves as making weirdo yeehaw synthpop in Austin, TX and GET IN MY FANNY PACK AND GO delightfully lives up to that experience. Give is a listen over on Bandcamp. [CJ Simonson] Few paths are as well-trodden as miserable, sour sentiment delivered with flat disaffection, cushioned by twinkling atmospherics, curdling guitars, and infectious hooks. It takes a lot to make this formula of interest to me at this point after hearing so many Smiths imitators, but SAFER OFF, the debut album from Bostonian group Lilith, peaked my interest through a couple of factors. The first is some genuine snarl to the guitarwork; there are a few cuts slathered in too much reverb to the point of saturation, especially “Garden,” but there’s more teeth than expected here on the cathartic chorus of “Lines Align” that features a maddeningly catchy, Cars-esque melody. The second are dreamy vocal harmonies, where the band’s classical training aids some well-constructed builds and climaxes, especially the blissed-out “Figure 1 Repeated” and “Decency.” The third, and most quintessential factor, are the candid, deliciously snide lyrics, as the band cusses out old friends who have not matured as much as them on “Vacation” and delivers one of the all-time harshest put-downs on “C.O.Y.F.”: “You want to buy a dog and own it, save it from the pound, then leave it home for days / you’re getting all its hopes up, but never come around.” It’s nothing new, per se, but that couplet alone is enough for me to recommend it, along with sugary hooks and vocals that make the sourness all the more sweet. If you don’t want to be one of the cowards in the back for whom the final reprise was written for, you’re SAFER OFF checking out the album here. [Blake Michelle] 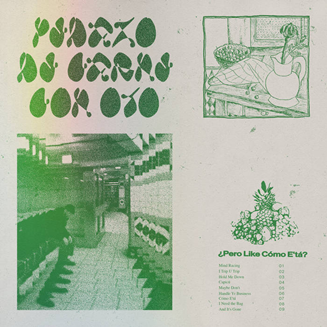 The question at the forefront of Steven Perez’s hypnotic, kaleidoscopic beat tape ¿PERO LIKE CÓMO E’TÁ?, which roughly translates to “But like, how is it?,” is harder to put into words than I’d expect. A beautiful, fluid mix of sampled fusion beats, psychedelic pop, and subtle hip hop, Perez’s work as Pedazo De Carne Con Ojo frustratingly has to be experienced to be understood, each song a calming yet bright sojourn through radiant, uncanny turquoise backdrops and translucent, mystifying vacation screensavers—the brightness of the LED experience feels soothing while also slightly on edge. The flippant vaporwave bounce that rides out “Maybe Don’t” continues folding in on itself as Perez mutters the title back at you, and while the whole thing is musically mesmerizing, there’s an anxiety running underneath. The same can be said of the digital hum that guides the tropical, ringing beats of “Hold Me Down” and “I Need The Bag,” almost eerie in their ability to be wholly enveloping while distancing at the same time. Perhaps the furthest thing from “lofi hip hop radio – beats to study/relax to” despite disguising a certain similar pleasantness, ¿PERO LIKE CÓMO E’TÁ? is hyper-engaging. It’s a fascinating 23-minute ride that you can find right now on Bandcamp. [CJ Simonson] 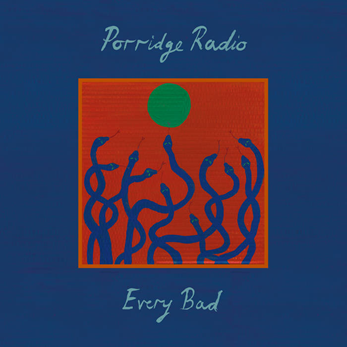 When Porridge Radio set out to write EVERY BAD, they certainly weren’t trying to write The Quarantine Album, but their first for Secretly Canadian is exactly that: the undeniable must-listen for life during lockdown. Had COVID-19 never completely fucked the fabric of our lives, EVERY BAD would no doubt still be the leader in the clubhouse for record of the year honors, but the exasperated fervor that permeates every moment of the album is so perfectly of this particular moment. I mean, when you hear Dana Margolin for the first time on “Born Confused,” commiserating “I’m bored to death let’s argue / What is going on with me,” it’s hard to imagine another opening that could so quickly lock into the frustration we’re facing. There’s the anxiety on “Sweet” (“My mum says that I look like a nervous wreck / Because I bite my nails right down to the flesh”), loneliness on “Don’t Ask Me Twice” (“Oh, I woke up / Felt alone / I counted hours in my head / I don’t know”), and plainly stating the facts on “Lilac” (“I’m stuck, I’m stuck, I’m stuck, I’m stuck”). Yes, this is a retconned reading, but the praise is not undue. For instance, I’m not gonna claim the actual instrumentals are any more applicable, they just plain rock. “Don’t Ask Me Twice” packs angular guitars straight out of the ‘70s with a chaotically soothing sound—like deciphering chicken scratch on a chalkboard—with a hook that’d lasso you to their daytime festival set at the little stage, all atop MacGyvered-together percussion. Porridge Radio is post-punk that doesn’t shove its influences down your throat and indie rock without the desperate chart chaser. If you still aren’t convinced, let “Lilac” wash over you: “I don’t want to get bitter / I want us to get better / I want us to be kinder / To ourselves and to each other.” Support Porridge Radio over at Bandcamp. [Ryan Moloney] 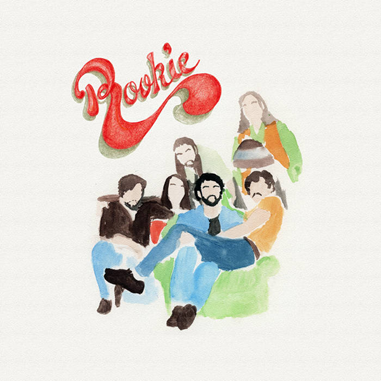 Two facts that will explain a lot about ROOKIE are that they spent the early part of 2020 opening for the eternally cool Cheap Trick, and that they use “Joe Walsh” as a tag on Bandcamp—if you must know, of the eight listed albums under that tag (which I of course did my due diligence looking over) two of them are ROOKIE releases and one of them is by an Oakland artist called “Now YOU Shred,” the description of which reads “Boutique backing tracks for discerning shredders!” It’s tempting based on the opening track of the group’s self-titled debut, the arena stomp “Hold On Tight,” to immediately lump them into a world of hooky indie rock with the likes of White Reaper or Sheer Mag, but while those acts certainly have a classic rock backbone, by contrast ROOKIE spend 42 minutes appealing just as much to fans of those acts as they do the dad who just wants to jam in his garage to Mellencamp or Marshall Tucker Band—Ex Hex and Twin Peaks are great, but did either have the balls to put Joe fucking Walsh as a tag on Bandcamp? Like any classic rock record, they frontload the album with the singles, the smug mid-tempo rocker “I Can’t Have You But I Want You” and the poolside day drinker “Sunglasses” both immediate highlights, but the rest of the record has some exceptionally well-made, mean-mugging bar rock, the piano crisp, the guitar solos wild, and the whole experience just hairy and sweaty enough to imagine on a warm ‘70s Chicago night. While the group turn it up to 11 a number of times on the record’s catchy back half, particularly on the final two tracks, “Miss United States” and the six-minute barnburner “E Jam,” the crunchier mid-afternoon cuts like “Michigan” and “Let’s Get It Right” feel a bit more my speed. As you search for something to text your mom or dad about while social distancing, shoot them over ROOKIE’s debut and get a conversation going. You can find the record over on Bandcamp. [CJ Simonson] 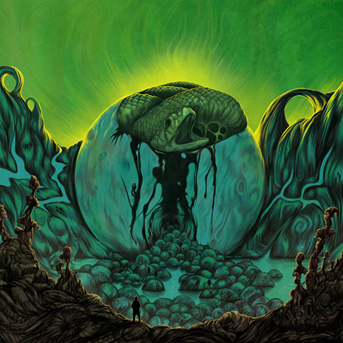 Yuri Gagarin – THE OUTSKIRTS OF REALITY

Named after the Soviet pilot who became the first person to enter space and having no qualms about leaning into its overblown, cartoon-adjacent aesthetic, Sweden’s Yuri Gagarin is a little nerdy, sure, maybe not the kind of thing you mention you listen to on a first date. But to write THE OUTSKIRTS OF REALITY off on those grounds alone would be to do yourself a massive disservice, as you’d be missing out on one of 2020’s best heavy entries so far, a head-bobbing, ass-kicking groove fest that manages to both bring the heat without indulging in metal’s more polemical characteristics and demonstrate a masterful grasp on ebb and flow of pacing and tension. Perhaps it’s cliche copy considering the overall presentation, but Yuri Gagarin really do latch into their role as guides for a psychedelic interplanetary journey on THE OUTSKIRTS OF REALITY, blasting off to the races with the pummelling rocket launch of “QSO” before letting the foot off the pedal as we begin floating full of wide-eyed wonder through space, regularly stopping off to fixate on a particularly arresting melodic lick along the way (“Crystal Dunes”). Able to evoke the looming menace of classic acts such as Black Sabbath and the jam band rhetoric of space cadet contemporaries such as Earthless in equal measure, all without falling victim to the self-indulgent stonerisms that can occasionally plague music of this sort, the crisp bite of the instrumentals, the improvisatory capability on display, and the sense of scope and wonder contributed via just the right amount of synth-prog touches all combine into something distinct and arresting. Toss Yuri Gagarin a few Euros on Bandcamp here. [Thomas Seraydarian]