The members of Tallies were just finishing up their dinner when I met them at Highland Park Bowl, which, as it happens, is a bowling alley and not an outdoor amphitheater. They were about to play their first show in Los Angeles, and for four 20-somethings in the midst of their first major tour in support of their first album, they seemed perfectly at home on the road. TALLIES, their self-titled debut, had been on constant replay for about a month prior to our meeting, the sort of record that feels like an old favorite on first listen, and yet still rewards on return visits.  On a March night in LA, with pins crashing in the background, we delved into how Tallies, the band and the album, came to be.

I promised my editor that the first thing I’d ask is what your favorite thing to tally is.

Stephen Pitman: We were actually just making our first chart over there.

SC: We were just organizing it, and then I saw, like, “and now we have to tally…” And we all paused. *Laughs*

Where did the name come from?

SC: It doesn’t have an epic story. It’s just a nice name! It just started out as “Tall”-ies, “like Tall Boys,” but then we liked the sound of Tallies better, it’s simple.

SP: Gotta give credit where credit’s due. Our friend Scott Johnson said “Tallies.”

Dylan Frankland: I think you were texting me about Tallies, but it was spelled the way it is, and after running through a bunch of horrible names, that’s the one that stuck.

What were some of the rejects?

SC: I was looking up flowers. A lot of different flower names. Like, Foxglove something.

SP: Sarah Kogen and the Donutmen.

SC: We passed on that one pretty quickly. Right Cian? *Laughs*

SC: He sees a new band and he’s like, “they should call themselves the Donutmen.” Whenever you’re trying to think of a band name, though, it’s so hard, but when you’re not, they all just come to you.

That’s the thing. I guess it’s kind of like writing music, they say you just have to have your notebook nearby at all times.

SC: While you’re thinking about it, yeah. 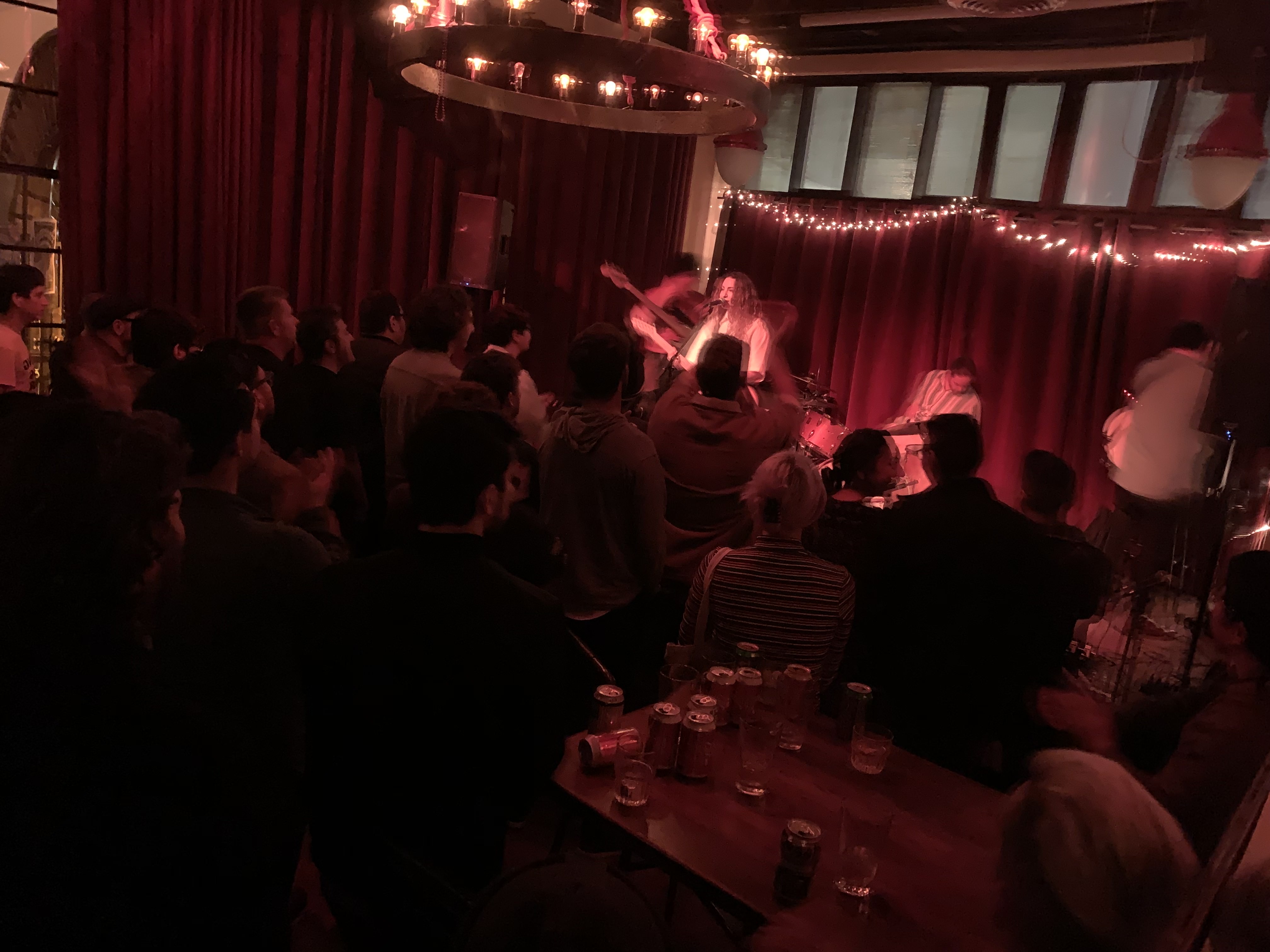 So you guys are in the middle of what I assume is your first tour, right?

SC: It’s our furthest tour. It’s our first tour with the album out.

What’ve been some of the highlights so far on the road? Have you been to California or this part of America before?

SC: This is our first time. This is the most south and most west we’ve ever been.

DF: There’s been a lot of traveling and it’s been a lot of stopover festivals. This New Colossus festival was amazing in New York City, it was the first one this year. And then a Savannah Stopover, the climate there was amazing. Then obviously South By Southwest was incredible.

I saw you guys were out at Walter White’s house yesterday on your Instagram.

SC: So yesterday we drove from Albuquerque to Barstow. So we drove like 12 hours. But we went to that house and it was pretty funny, because there’s a lady who lives there, I guess, who just comes outside and starts filming everybody taking pictures.

DF: It seems like they’ve altered the house as much as possible to ruin it. I don’t know why you’d buy that house if you didn’t want the attention, it’s probably the most popular TV show ever.

I’ve heard they’ve had problems with people chucking pizzas on the roof.

SC: We were thinking about bringing a pizza, but we figured everyone else had already done that.

You don’t want that to be the thing that causes a wrench in your tour plans.

SP: Blacklisted from America for throwing that pizza. 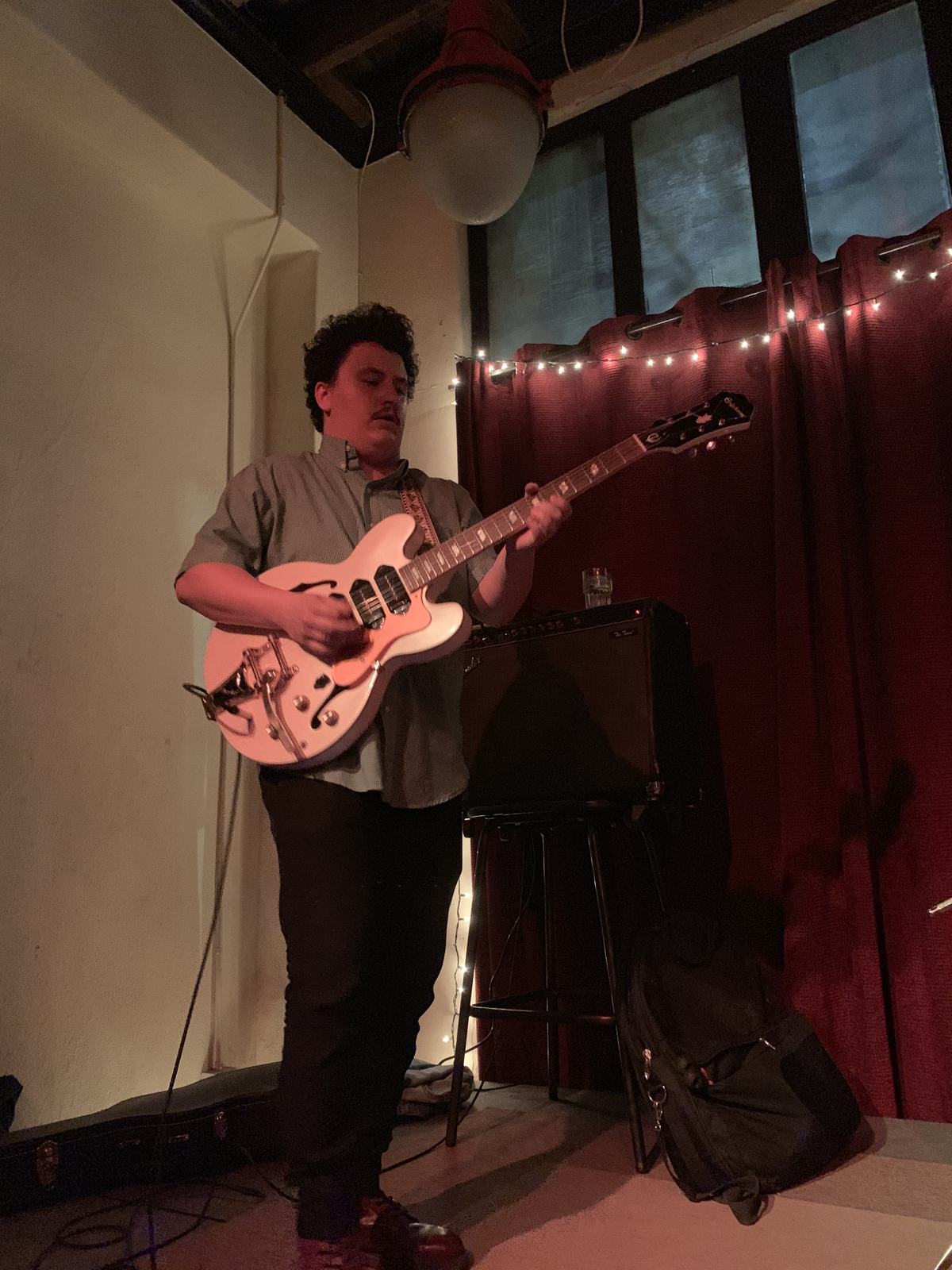 When I first heard about your record, it really seemed to just come out of nowhere. Does it seem to you that your rise from your starting point as a band to now is as much of a whirlwind as it does from the outside? Has it been a crazy, rapid experience?

SC: We had no expectations for it really. The attention it has gotten has been beyond our wildest dreams.

DF: We’ve got to really hear about (that craziness) firsthand just by coming to all these places we’ve never been before.

SC: I really don’t even think we’re even that aware of if it’s doing that well. *Laughs*

Do you think it’s better to have that separation, or do you want to have your fingers on the pulse of that success?

SC: I kind of like the separation. It’s more enjoyable to hear about it after the fact that it’s doing well as opposed to really being on it and waiting for it to potentially fail. We don’t think about it, really. We’re just hoping people enjoy it.

SP: I think the main thing is to keep playing music and doing what you love. It’s more just go to a city, play a show, and have a good time.

How did you all meet?

SC: Dylan and I met in college. We started in a program where we did business and engineering. The band started under another name—we were actually pretty influenced by Summer Twins and we’re actually playing with Chelsea Rose tonight, so that’s pretty cool. And we moved to Toronto e and then Dylan and Cian go way back.

DF: We met at School of Rock camp in Barrie, Ontario. I guess we were going into grade eight.

Cian O’Neill: I was 12, I think you were 13. I met Stephen at university in Halifax and we formed a band that was around for a very short period of time.

Why is it that Toronto that seems to be such a wellspring of music right now?

SC: It’s the music capitol for sure.

So it’s a tight-knit community?

SP: It’s a bunch of different tight knit communities I’d say, who are all friendly. And it’s very diverse.

It seems like even just in the last decade it’s been even more prolific as a music city. Is there anything you attribute to that or is it just for those reasons?

SP: Buzz Records was pretty big a few years ago. Five or six years ago when I moved back to Toronto, I wanted to get signed to Buzz Records, that was the thing to do. It’s moved on from that, I think, but a lot of good bands came out of that, and that scene. That was big for the Toronto scene.

DF: Hand Drawn Dracula has its legacy of bands too, so it’s awesome to be a part of that. I think Hand Drawn is on the rise.

So when you guys met in school, you guys had been studying music, right? You’d been planning on getting into the industry in one way or another?

SC: Yeah. So that program was engineering, producing, and business. So I initially went in aiming for more for business, but then we ended up doing a lot of the engineering together. Dylan’s an engineer/producer, he works at a studio, I just took what I could from it and we just recorded our own stuff.

When did you start writing songs on this record?

SC: Last year. We had some other songs under the other band, but as soon as we got signed and got Stephen and Cian, we got a new sound and matured a bit. It’s only been a year, really.

DF: When us four got together it really started to click and then the labels were interested cause I guess we had something going? *Laughs*

Dylan, did you feel like because you were working with bands in your work life that you could cut loose and be a bit more experimental because this was your band?

DF: Oh yeah.  Unless our producer Josh Korody was like, ehhhhhh…

SP: It was basically Dylan being like “We should do this!” and then Josh being like “Uhhh no…” *Laughs*

What were some of the things that got shot down?

CO: I originally played a lot of Latin beats in some of the songs and those all got scratched.  It would have been a very different sounding record. There was one that was originally a bossa nova beat—it was even called that.

SC: There was also a cut-off of Dylan’s guitar layers after 20 layers… *Laughs*

SP: He kept on screaming, “We need more guitars!”

DF: Josh had to organize through all the shit I put on it. He did a good job. We were going for that “lasagna” layered sound. 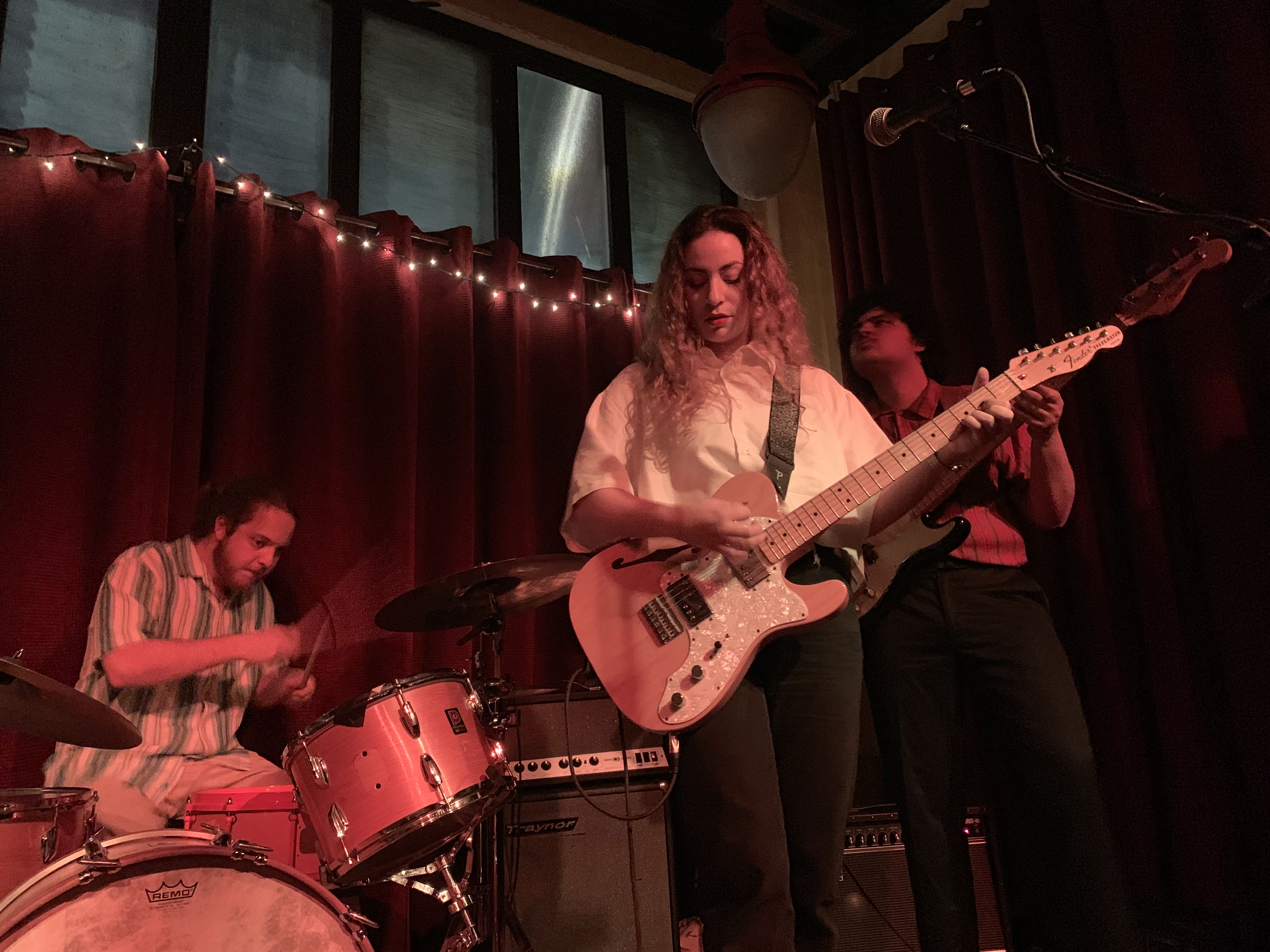 Opening up with “Trouble” is such an awesome choice. It’s almost like a warning. What was the trouble you guys were thinking about?

SC: I wish we’d planned that *Laughs* It was just the feeling of vulnerability, and not quite being as self-aware as one would like to be.

What was the first song you had ready to go for this record?

DF: “Rocks.” That was the first song. And then shortly after, “Mother.” You can hear how bare they are, comparatively.

SC: Those two songs are a little bit of a lingering holdover of the band from before Tallies.

There are a lot of people who in hearing this album for the first time will compare you to those bands from the ‘80s—you get a lot of Cocteau Twins, a lot of the Smiths, a lot of the Sundays… It’s easy to see how that could bother you. How do you feel about that?

DF: I think it was the guitarist for Slayer who said that when you make your first album, you emulate your heros. And that’s what we did. And we’ll see what happens next. 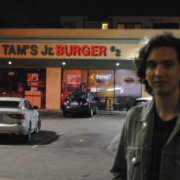 Max Datner
Max Datner is a Philly Boy trying to make it in the big city of Los Angeles. His passions include Springsteen, Yuengling, and finding the perfect burger, and ladies, he is single.

TRAILER TRASHED Episode 19: THIS IS CHAOS