As an avid survival horror fan (I’m talking about early RESIDENT EVIL, not the new age survival horror games alá OUTLAST and AMNESIA) I was immediately invested in SIGNALIS. It was a combination of things: the game came out just before Halloween, it features a low-poly aesthetic and grainy, static imagery felt fresh and familiar at the same time, and frankly I’m a sucker for horror stories set in space. Not to mention, the game has heavily implied lesbianism and robots. The vibes were great—this game had all my support from the beginning, and, for the most part, it doesn’t disappoint. But while the nostalgic appeal and reverence for past horror icons does a lot for me, there’s a lot here to admire on its own merits. 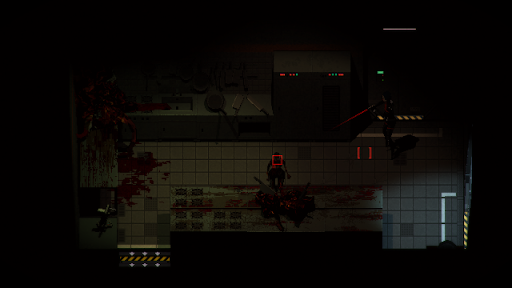 The reticle that highlights enemies is a great touch.

From a mostly top-down third person view, you play as Elster, a “Replika” (robot) who awakens on a crashed ship looking for her “Gestalt” (human) co-pilot Ariane. You become tutorial-ized on the mechanics of the game as you explore, ultimately leading to a search outside of the ship. Suddenly, you’re in a room and a monitor flickers. Queue a  foreboding cutscene, flashing text about a promise, and BAM—you’re in a bloody bathroom in an entirely different location muttering about having to find “her.” From then on, you’re wandering halls in a mining facility, collecting items, solving puzzles, and avoiding or gunning down bloody, infected robots to get to your next goal. As a little survival horror lover who would do runs of RESIDENT EVIL 3 in their free time, it tonally felt like coming home.

SIGNALIS has a great, simple setup that only gets exceedingly more complicated narrative-wise. The facility is mysterious, and infected robots aren’t your only company; you occasionally run into other characters on their own journeys looking for someone or actively discouraging you from completing yours, oblivious to the horrors happening around them. 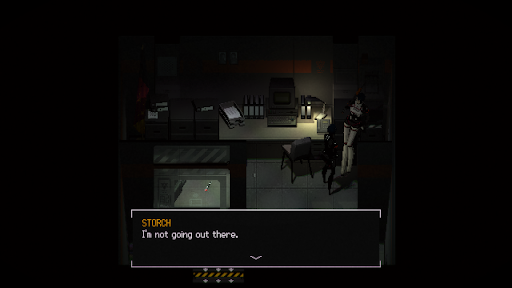 Unfortunately the characters found around the map are more set dressing than actual narrative.

An obvious bathroom mirror reference aside, it’s clear that narratively, thematically, and visually, SIGNALIS is deeply indebted to SILENT HILL 2. There’s the same unexplainable horror, the same mysterious setting with other characters on a similar journey as you, and the same determination to find your partner. The only issue is, SIGNALIS lacks the characterization and memorable interactions of its survival horror predecessor.

When I think about SILENT HILL 2, I think about James Sunderland and the complex feelings he’s having about his experience and why he’s there. His wife is a major character in both her absence and how James remembers her. In SIGNALIS, you really don’t get much of anything out of Elster other than that they’re looking for their partner and they’re a robot. I emphasize the robot aspect because any character development that can be read into the characters comes from the history of their robot model. Ariane gets a bit more characterization towards the end, but nothing  that hasn’t been done before in similar doomed, queer storylines. The *nudge nudge wink wink* ripped from a psychology textbook naming conventions don’t really amount to much either. The game is interested in identity formation, mankind, depression, and existentialism, but doesn’t explore any of those topics with any more depth or nuance than sci-fi classics like ALIEN or BLADE RUNNER. 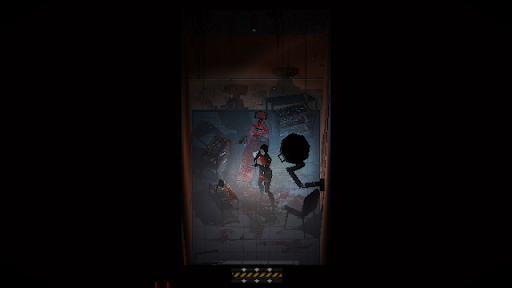 Lots of references in this game.

Because of these choices in characterization, SIGNALIS ends up feeling more like DEAD SPACE to me: focused on the isolation of space and what it does to people, the monsters and horror seemingly coming from something deep underground, the only forward moving plot being the desire to find your partner. In the first DEAD SPACE, the player character Isaac was an entirely silent protagonist, and the experience was isolated to a ship called the USG Ishimura. DEAD SPACE was more invested in its setting than it was its leading character or his motivations. It was more about being alone and scared, not really knowing what was going on, and just wanting to see your girlfriend again. SIGNALIS gets closer to this kind of psychological horror. Elster is alone, scared, and (as far as I can tell) just wants to see their “girlfriend.”

Like the Ishimura, the facilities and general world of SIGNALIS feels sinister. You learn that this universe is living under a totalitarian regime and they use both German and Chinese characters as a way to denote some kind of alternate history to our own where certain countries united. Monsters haunt the rooms, shriek when they’re alerted to your presence, and you’re constantly finding journals about people succumbing to a sickness. There’s so much lore to find about the world, and its rules—enough great world building material that I could see people really mulling over every detail. You don’t have to try to make sense of it all to enjoy the game, and that’s one of its strongest qualities. You just know shit’s fucked through the visuals themselves, and the notes and diaries add flavor. But again, this is all external and doesn’t really add anything to the characters we follow—this isn’t to say these story elements things aren’t enough to entertain, but they do leave me wanting more in regards to the queer robot identity crisis story the game sets up. 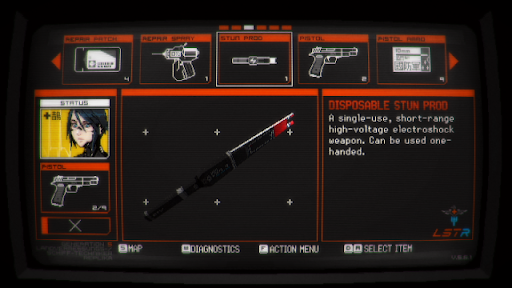 Curse these stun prods for always taking up a spot.

Mechanically though, SIGNALIS is actually trying to be a classic RESIDENT EVIL game. There are no fixed camera angles or pre-rendered backgrounds, but the beats of the game are very similar. The game is broken up into sections or “hubs” filled with puzzles that require finding items all over each map. There are safe rooms with item boxes and their own version of a safe room theme that fits great with the world. You have only six slots to hold items, a heart monitor to denote health, and aiming and shooting is appropriately clunky.

It’s classic, the type of perfect recreation that feels good to experience again with a fresh coat of paint, but also so committed that its shortcomings are a little more egregious. It honestly feels like a bug that your sub-items (stun rods, flares, and emergency first aid items that you can use without pausing) take up a slot even when they are equipped. You are eventually so flooded with healing items, ammo, and weapons that inventory management becomes less about remembering where things are for your next outing, and more just completely ignoring most items and moving on. In RESIDENT EVIL ammo is precious and sub-items allowed for a free break away from an enemies grasp without encumbering you, here both feel like a burden. I missed a gun entirely and still had so much ammo going into the final boss, but also that didn’t amount to much because I couldn’t carry more than six items. 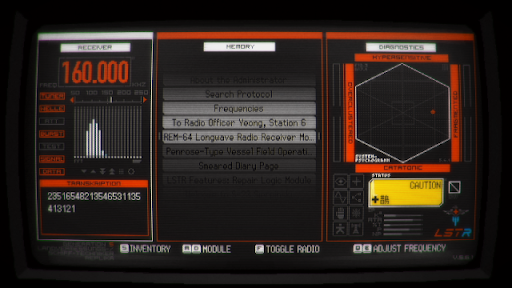 Be prepared to see this screen a lot.

Something that feels distinct to SIGNALIS is the radio mechanic, a fun new addition to puzzle solving that I enjoyed, even if it wasn’t always super clear what its limits were. Within the pause menu, you can tune a radio to different frequencies, and you’re constantly getting notes and pieces of information on the frequencies that spies and other people would use to exchange information. There are certain enemies that require tuning your radio to a specific frequency to take out, and many puzzles end up requiring it. One puzzle has a mic connected to a display, and the display traces different patterns depending on your radio frequency. Things like this are par for the course in SIGNALIS. Eventually you’re just expected to remember that you have to tool stowed away in a pause screen.

There is a lot to keep track of, and the tools that are supposed to help aren’t really always intuitive. Every note you come across (regardless if it’s just set dressing or puzzle related) is stored in your pause menu, but they aren’t organized, so you end up scrolling one by one. The image capturing tool the game eventually provides takes up a precious inventory slot, so I ended up not carrying it and just taking pictures with my phone IRL. Puzzles being so complex and requiring  photographs and written notes, again, feels so classic survival horror in the best—and the worst ways. 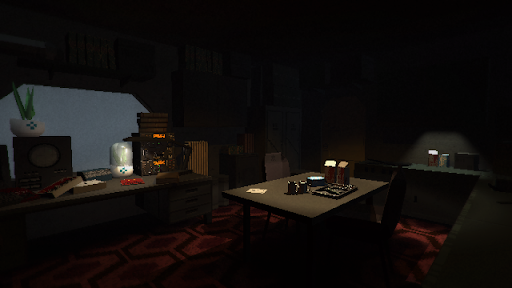 The first person sections are a great way to break up the pace, and yes, that is THE SHINING carpet, I told you there were a lot of references.

SIGNALIS is a great survival horror experience that anybody who has an investment in the genre should try. It’s a reminder of all the reasons we fell in love with this type of entertainment and it’s able to blend concepts and ideas from beloved franchises to create something that feels fresh, if not necessarily always unique. I wanted more from it as a queer narrative and it may not be the best Silent Hill game of the year (that award goes to the RESIDENT EVIL VILLAGE DLC’s “Shadows of Rose”), but SIGNALIS left me glad to be a fan of the genre. It’s easy to love classic tropes reconfigured in a way to try and keep them alive. But if there’s anything SIGNALIS teaches, it’s that maybe it’s okay to say goodbye to things when they’ve run their course. 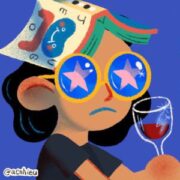