The latest music video for Night Moves’ single “Strands Align” tells a darkly twisted tale of a used car salesman who gets intertwined with a pair of robbers on a crime spree. Reminiscent of a scene in a David Lynch movie, it evokes sophistication, an exploration of identity and purpose. When I talk to guitarist John Pelant over the phone from his tour bus in North Carolina, he assured the themes are much simpler. “I just write songs, and then I try and perfect them until they’re as good as they can be.” He pauses in thought for a moment. “And then I hope by the end of the process, while I’m sculpting, it comes together tonally and thematically. But when I’m writing, it’s just what’s coming out of me at this stage in my life.”

Minnesota-based Night Moves’ third album CAN YOU REALLY FIND ME has every ounce of potential to become the album of your summer. The psych-country-rock group has come a long way since their debut, COLORED EMOTIONS, was released online for free back in 2011, signing with Domino Records and following up with the stellar PENNIED DAYS in 2016. A full listen to the album feels akin to the sensation of staring deep into the desert night sky. The longer you gaze, the more the constellations and nebulae reveal themselves, the more intricate sonic layers make themselves known. The first track, “Mexico” is one hell of an opener—hell, it might just be the best song on the album. It swells and contracts, bursting with acid-tinged emotion. The fervent vocals melt into the soulful keys and warm synths, with a strong pop hook that lodges itself inside your brain. About three quarters of the way in, it breaks down, giving Pelant the chance to deliver the haunting lines:

“And while it calls for you

Oh well it calls for me too

But could you sing my name for me?

I’d do it though I don’t know how”

It’s a track on the same level of previous hits “Carl Sagan” and “Colored Emotions,” which have gained traction on college radio shows and at art school house parties, played idly in the background of stoned summer hangouts and road trips. Fans in the know have been singing Night Moves’ name to like-minded audiophiles for years. But Pelant has learned not to give much thought to what everyone is saying when a new album comes out. “I don’t really read the reviews anymore. If it’s good, fuck yeah. But if it’s bad, it doesn’t really matter… I know what we were trying to do, and I feel like we successfully did it.”

Our conversation happens from the band’s touring van right after soundcheck. When I ask about his pre-show plans, Pelant easily replies, “Shave and change… The van doesn’t have AC.” The van does happen to have a cassette tape player, which is used to soundtrack the band’s longer drives. Cassettes represent a weird transitional period of technology, feeling neither old nor new.

The days of rifling through your car’s CDs and cassettes are becoming more and more obsolete. With streaming access to thousands of albums at once, it has become ridiculously easy to develop (although simultaneously harder to maintain) customized music taste. One algorithm that somehow gets it right? The Spotify Discover Weekly playlist. “It’s fucked up. But it’s weird, though, because sometimes it gets you,” Pelant says with a smirk in his voice. “I hate when it pleases me. The more information you give it, it knows you more and more, you can really dial that shit in.”

Knowing the band’s sound, many of the group’s cassettes aren’t surprising (except for the thrifted subliminal New Age trance tape the band sometimes plays on loop). The fact that the group spins Pink Floyd and Neil Young makes total sense. Each of their influences is an ingredient in the potent concoction that is Night Moves. A little dash of Todd Rundgren, folded in with Jackson Browne and a Crosby, Stills & Nash finish. But the album doesn’t feel like an homage. These songs sound like they exist in the same world as the aforementioned artists—“Angelina” could have been spun on vinyl 50 years ago and no one would have batted an eye. CAN YOU REALLY FIND ME combines electric songwriting sensibilities of yesterday with sleek, modern production techniques, like a refurbished 1964 Ford Mustang. All the nostalgia and aesthetic of the original model, but damn, the engine runs smooth.

That process has been made significantly smoother by the addition of a touring sound engineer. “He’s at the helm of the controls you know, the helm of the ship.” Pelant remarks. “You can do your part on stage with pedals, but the aspect of getting the right blend, those weird layers… the mix is like, everything. He’s been essential to that element of our live shows.”

After this current stretch of touring, the band gets a small break before picking back up again in the South (and anticipate making it over to the West Coast later this fall). While on the road, “I always forget about the day of the week. That affects the morale of the crowd,” Pelant shares. When we speak, it’s Friday, the first day that hasn’t been doused with rain. “Friday night… We’ll see what happens. I’m having the best time so far.”

You can check out Night Moves’ CAN YOU REALLY FIND ME on Spotify.

Tired and Older In Spirit and Sound, the Raconteurs Return on HELP US STRANGER

A Complex System That Doesn’t Take Itself Too Seriously: Joe Jacobson, insightEXCITE, and Studio JŌJ 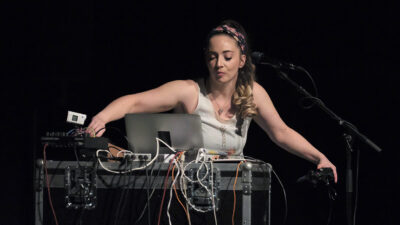