In a hard year full of great games, Merry-Go-Round Magazine is taking some extra time to talk about games on and off our favorites list that meant something to us in 2021.

THE ELDER SCROLLS V: SKYRIM was my favorite comfort game right before the pandemic. I spent the summer of 2019 exploring the wintery province of Skyrim to escape an abusive relationship. Characters like The Dark Brotherhood assassin Cicero and the DAWNGUARD DLC’s vampire Serana were supportive companions to me throughout my travels. Before meeting you, Cicero spent more than eight years trapped underground in the Dark Brotherhood’s Cheydinal Sanctuary, forced to tend to the remains of the assassins guild’s Night Mother. Serana is the daughter of the vampire Lord Harkon, who was sealed away for thousands of years within the Dimhollow Crypt to keep her safe from her evil father. These characters spent years in isolation and are burdened with responsibility. Their lives are tragic and they want a fresh new start. They’re also some of the most fascinating and talkative characters in all of vanilla SKYRIM and really helped bring the game to life.

Originally released as an award-winning mod for SKYRIM in 2015, Modern Storyteller’s THE FORGOTTEN CITY is a mystery adventure game where your customizable protagonist finds themselves trapped inside a Groundhog Day-esque time loop in an ancient Roman city. The original mod was set in SKYRIM’s Dwemer ruins. All of the citizens of this closed-off, cosmopolitan, underground city are essentially held hostage by a deadly curse called the Golden Rule. If the citizens commit any type of crime, the city’s golden statues spring to life and execute everybody. Nobody is allowed to leave the city and the villagers additionally hold each other hostage through blackmail, abuse, and financial exploitation. Almost every character in THE FORGOTTEN CITY has a secret and needs your help. Your main quests are to locate Magistrate Sentius’s daughter Sentilla and to find a way out. 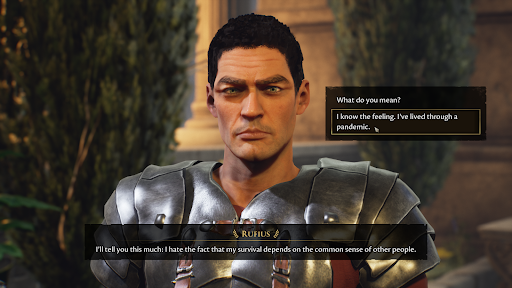 THE FORGOTTEN CITY’s characters are profoundly fascinating and well-written—each much more alive than any character from SKYRIM. They’re also wonderfully diverse and queer! There’s Farmer Galerius, a sweet and faithful yes-man who will carry out your bidding whenever you travel back in time. He’s cheerful, reliable and has a huge crush on the local priestess Equitia. You can flirt with the gorgeous, queer and greedy tavernkeeper Aurelia if you play as a woman. You can help healer Lucretia save the suffering townsfolk following the disappearance of the city’s doctor Naevia. Or you can go looking for Naevia yourself and stumble upon one of the most frightening sequences in the entire game.

There are so many creepy, hidden areas for you to discover throughout the city and  exploration feels fluid and natural during every playthrough. Within these mysterious locations you might even find unexpected characters with the most captivating tales. Every character in this game is bursting with charm and personality. And most importantly their expressions are beautifully animated and leaps and bounds better than the stiff, potato faces of Skyrim. These characters really do feel alive and their struggles are urgent and relatable. (I wish I could tell you about some of my favorites but I don’t want to spoil the game—you’ll have to meet them for yourself.) 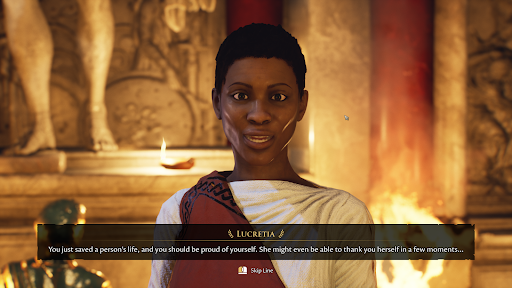 Throughout the pandemic, I often thought about returning to SKYRIM for some much needed escapism, but realized I was feeling intense longing and nostalgia for something that was never really real. Cicero and Serana are easily the most exciting characters in SKYRIM, but they quickly run out of dialogue, repeating the same lines. A lot of the depth I saw within these characters was something I projected onto them out of loneliness. I downloaded mods so I could dress them up to give them more personality. Cicero looked so cold running around Skyrim in his tattered jester’s costume. I dressed him up like a paper doll, making him and my Dragonborn wear matching scarves. I dragged Serana with me on almost every quest just to see if I could get her to say something new. These characters felt painfully flat and I spent many nights combing through pages of fanfiction to try to make SKYRIM a more exciting and meaningful experience for me.

When you’ve completed SKYRIM’s main quest, Cicero and Serana don’t have much to say to you. Cicero continues to yell “Let’s kill someone!” and never congratulates you on your amazing achievements. It’s unclear if Cicero is even aware that you are the legendary Dragonborn. There’s a reason Smartbluecat’s Inigo the Khajit companion mod is one of the most popular SKYRIM mods of all-time—he has more than 7000 lines of fully-voiced dialogue. In the many endings of THE FORGOTTEN CITY, the game’s characters reflect upon your actions and thank you for your help. The true ending gives you the ultimate closure; your investigation’s findings are illuminating and deeply satisfying, and you’re able to leave the game understanding the full weight of the choices you made. It feels like you’ve genuinely helped these fictional people escape this terrible nightmare. 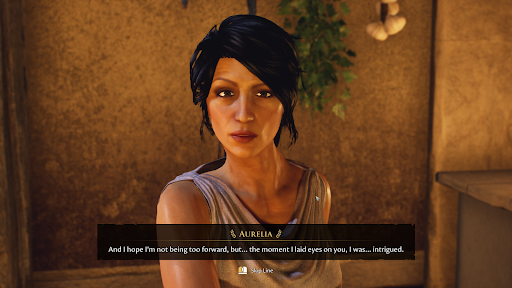 In 2019, I was a total loner. My abuser kept me away from my friends and family to maintain control over me. I was convinced I was repulsive and unloveable. SKYRIM helped me understand that it didn’t have to be this way—that I didn’t have to be alone and that I could go on fun adventures with weird and exciting friends. In 2022, I’ve become a weird and exciting friend to several sweet, extraordinary people who make me feel happy and loved. I was lucky enough to play THE FORGOTTEN CITY together with my best friend this past summer over Discord. It felt so meaningful to play the game and revisit SKYRIM through it after all this time. THE FORGOTTEN CITY is everything I wished SKYRIM could have been and more. 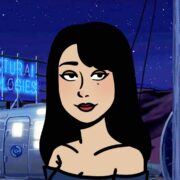 Patricia Petit
Patricia Petit Liang is the award-winning host of the surreal comedy talk show Fatal Attraction on CJLO 1690AM. Tune in Fridays from 2AM - 3AM to hear Patricia play new music by queer artists of color, talk about self-care, share her favorite cursed YouTube videos and interview exciting guests!

AFTER YANG and WHEN YOU FINISH SAVING THE WORLD: A24 Teases Their Humble 2022 Slate at Sundance