Resources like money have a high degree of variability regarding what they are worth at the end of the game. Sometimes they are tie-breakers, like in VITICULTURE. Sometimes they are only worth something when activated with various objectives or powers. In THE MANHATTAN PROJECT: ENERGY EMPIRE, the oil, steel, and energy cubes bestow points only if you’ve gathered the corresponding achievements. Sometimes there are no victory points because whoever has the most money wins, such as FOOD CHAIN MAGNATE. Most of the time, they follow a conversion—in 7 WONDERS you get one point for every three coins you earn.

There are plenty of ways to score points in FIVE TRIBES: claiming tiles, selling goods, collecting genies, etc. Many victory points will come from money, where one coin is one victory point. You start the game with 50 coins or 50 victory points. It’s a bold decision that forces players to rethink their approach to currency. In conjunction with the bidding system, it keeps the decisions difficult and tense even as the pool of potential moves dwindles. 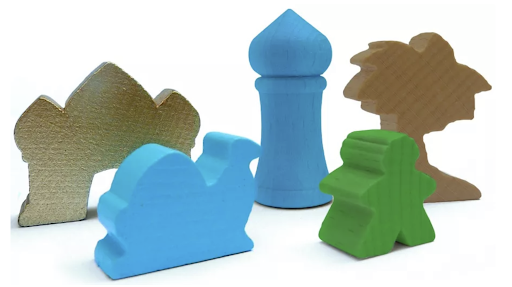 The meeples in question

The first few times I played the game, I primarily focused on the area control aspect, skillfully maneuvering assassins to deplete tiles of meeples and claim them for myself. In doing so, I neglected money and ended with around 13 coins. I frequently overlooked the blue Builders because they seemed dull. Getting 10 or 12 coins? Bah, that’s nothing. What a fool I was. I was so used to systems where money is a means to an end, or the only goal, not the no man’s land that TRIBES exists in. In future games, I’d recognized the value of being a bit more stingy with money because among other things, there’s an unusually high conversion rate.

Many board games follow a rags-to-riches arc. Players start with limited resources and options and slowly work up to gain more of both, to the point where it feels like they can do anything. It’s inherently satisfying to start with a farm, a couple cows, and one coin and end with a shipping empire. Games facilitate this by giving you more options, whether opening more action spaces, making better gear available or increasing production amounts. FIVE TRIBES does not follow this arc though. The available options dwindle throughout the game as meeples are returned to the bag and tiles are claimed with no possibility of changing ownership. Those who can get past the games’ initial analysis paralysis can get tripped up by this seeming shrinking of options.

Most criticism not focused on the former takes umbrage with the latter, and usually I’d be in agreement with this criticism. But the bidding system, combined with the oversized value of money, turns it into a positive. Each round of FIVE TRIBES begins with players bidding for turn order—and no one really addressed this system when I first learned the game. I like a unique variable turn order system because it keeps the flow from becoming too static by always going after the person to your left or right. Still, with so little emphasis on it by the gaming public, I never found it vital to the game before playing it. Yet it turned out to be the lynchpin holding the game together by keeping the choices difficult as the game went along. 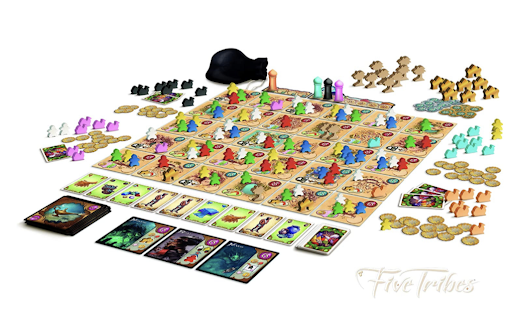 As the potential moves dwindle throughout the game, the desire to bid high to grab a lucrative meeple movement grows ever more paramount. You can bid up to 18 victory points to get a guaranteed move, but that’s a lot to sacrifice. Can someone else outbid you and undermine your plan if you bid lower? Is it worth giving up that many victory points to grab one of the few remaining moves left? Do you hedge your bets and hope nobody sees your outstanding play or that another effective move opens up later in the round? The turn angst is phenomenal as the decisions stay tense even as the moves on the boards diminish.

Too much ink has already been spilled about FIVE TRIBES’ paralysis-inducing sea of meeples, or its depiction of slavery defended under the guise of ‘historical accuracy.” Yes, a game about summoning djinns is striving for historical accuracy, guys. These were the only things I’d heard about the game back during its release in 2015, but those conversations did a disservice to the genius design that went into it. Without overdriving the value of money, the dwindling pool of meeples and bidding system would never have worked as well as they do. Because they’re there, every turn can feel critical—a few wrong turns from disaster.