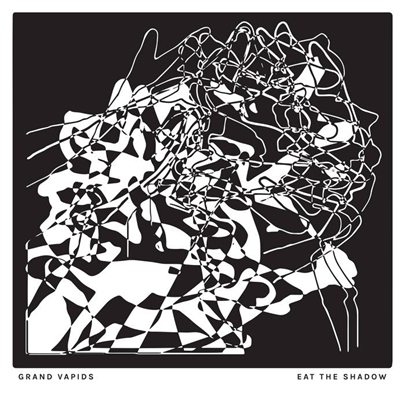 With every chugging build, you expect some crunch of frantic distortion, or some blitz of no wave intensity. And yet, for better or worse, it never comes. Grand Vapids offer power and grace in equal measure, with accessible fuzz-and-scuzz guitar melodies and a rhythm section that demands reckoning with the tightness and intensity with which they command EAT THE SHADOW’s lumbering swell. Crisp and calculated, Grand Vapids at times offer the hypnotic distortion of traditional shoegaze or the derailed intensity of acts like Sonic Youth or Wire, and filter it through trudging lo-fi tendencies of modern slowcore and post-punk. EAT THE SHADOW’s best songs are guided by the group’s precisely arty arrangements but straightforward builds; the group displays this best in the open to closer “Radiant Black,” with its mean-mugged punk-ish rise and jagged guitar playing slowly becoming faster and more dizzying. The melancholy chaos of album highlight “Bit and Brittle” is musically both beautiful and crushing, and the crawling haze of the excellently titled “Glassing Out” is equally damning, the vocals fighting their own echoes. Even the sax playing in “Creature Strain” howls with a kind of decidedly meticulous wildness that is inescapably pretty in ways that feel dark and mysterious. By the end of its seven-minute run, “Radiant Black” is the strange end to a sludgy, bewitching hour. While certainly bands like Ought or Shopping have grabbed similar energies, there’s a slow-motion tragedy to EAT THE SHADOW that is really something to behold. You can listen to it on Bandcamp. 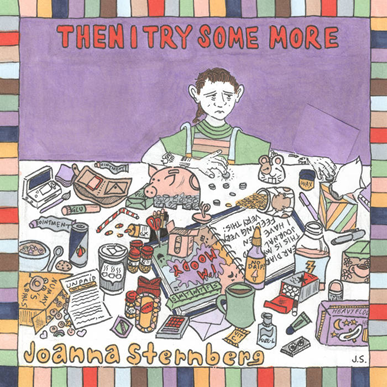 Joanna Sternberg – THEN I TRY SOME MORE

Favorite Tracks: “This Is Not Who I Want To Be,” “My Angel,” “You Have Something Special”

Joanna Sternberg lays a lot out there in the opening of their record THEN I TRY SOME MORE. “Rain pouring down my head pounds from the sound,” Sternberg sings, a kind of helplessness radiating from their voice. “I’m stuck to the bed with brain zaps in my head / I can’t fall asleep I cannot stay awake / I cry till I weep I shiver and I shake.” They conclude something both simple and profound: This is not who I want to be. As Sternberg would tell Stereogum about the track, they wrote the song while “in my room going cold turkey when I should’ve been in a hospital,” and there is a current of trapped-in-your-own-brain urgency that runs throughout this album. Admittedly, urgent is probably the last word I’d use to describe the sonics of the record, which errs more towards quick, homespun bedroom doodlings in the vein of artists like Frankie Cosmos or even the Moldy Peaches, but the urgency in question lies in the emotional fervor radiating from the imprisoned mind. Sternberg, often delivering near hymnal style songwriting from behind the piano or guitar, uses THEN I TRY SOME MORE to provide some devastating internal realizations: “Something died in me years ago / I’ve been trying to find it each place I go” (“Nothing Makes My Heart Sing”), “All of my thoughts are too distracting / Most of my dreams have died / Lately I’m scared of interacting / That’s why I hide inside” (“Don’t You Ever”), “People that I loved and knew did not know me or love me / I put them up in the sky they were so high above me / They did not love me” (“You Have Something Special”). The songs feel unabashedly intense—the kind of words spoken directly and with a focused stream-of-consciousness, when you’ve been kept from saying them for so long they no longer register as overly direct or, perhaps, socially awkward. The mind reels at how many of these songs sat trapped in a room and in a brain as the wheels turned trying to perfect them. They are, as hyperbolic as it may be to say, a truth. And listening to them alone, on a walk or in your room, they are beautiful—a fallen but hopeful personal hallelujah, of sorts. Appreciate Joanna Sternberg’s genius over on Bandcamp.

Concise Yet Full of Life, ANGEL’S PULSE Is a Fitting Addendum to NEGRO SWAN