When most people reflect on an internet fandom, it’s usually regarded as Something Bad, or if it’s not outwardly bad, most articles tend to zero in on the actors within that fandom that will make you turn off comments or replies. It’s not often that there’s something objectively nice to focus on, but oh has it arrived in the form of the unlikely and seemingly unbreakable alliance between fans of the Doom series and fans of the Animal Crossing series.

The two franchises are almost diametrically opposed; DOOM is one of the original hyperviolent first-person shooters, with its most recent iteration reaffirming its gore-filled, neck-snapping, bullet-flying chokehold on gaming culture. Animal Crossing, on the other hand, is a peaceful romp spent designing villages, catching bugs, and slowly paying off a debt as you build your dream home with your animal friends. It’s almost a “And Never the Two Shall Meet” situation, but yet fans of both games have embraced each other and uplifted the stars of each other’s games.

But what would lead fans of two diametrically opposite games to become each other’s number one fans? Well, both games are slated to release on March 20th, and, uh, that’s pretty much it. Most agree internet anthropologists have traced the beginnings of this alliance back to a series of fanart drawings, arguably beginning in July 2019 when Twitter user @MrAgentStrange posted a drawing he commissioned of the silent protagonist of DOOM (2016), known colloquially as “Doom Slayer,” “Doomguy,” or simply “The Slayer” teaching various cute characters how to use the powerful weapons featured in DOOM. One of which was Isabelle, the friendly assistant to the mayor/player in ANIMAL CROSSING: NEW LEAF. For those unaware, she’s become sort of the de facto mascot of the Animal Crossing series as her always-helpful attitude immediately endeared her to fans. 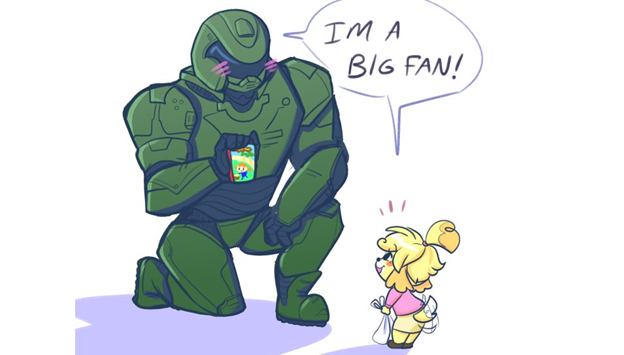 As most memes and internet movements do, things were fairly quiet as sentiments roiled in their various corners. Then in late 2019 to early January, more and more wholesome fanart featuring the Doomguy and Isabelle began cropping up. They appeared in each other’s games, outfits, and helped each other with their jobs. The unlikeliness of the alliance made it even stronger, until eventually the official Doom Twitter account began asking for more Animal Crossing content.

Other than this one of more explicit instances of Doom and Animal Crossing fans coming together is a post from reddit user u/Genkiz-_ on the Animal Crossing subreddit. In this post, u/Genkiz-_ hails from the Doom subreddit and informs the community that the Doom fans wish them nothing but support as their games launch on the same day. This particular post was much lauded by the community, receiving a huge number of upvotes and even a “Wholesome” award.

And that in a nutshell seems to be what’s driving the alliance: how wholesome the relationship seems to be despite how disparate they are. If one was more cynical they could say that this wholesomeness is more of an ironic meme, and that it’s an ironic joke to perpetuate the sentiment. But then again, it could simply be that both fandoms just want each other to succeed in their own areas, and dang it all, watching Isabelle team up with the Doomguy is honestly kind of cute.