I’ve read the same amount of Lovecraft as the designers behind the myriad of Cthulhu-based games: 0. What little I understand is incongruous with the ability to kill a tentacle monster with a molotov cocktail. ELDRITCH HORROR, my favorite in the Arkham Files series, features a cover with two machine gun-wielding agents aboard a moving train. The specific mechanic that captures the mystery and terror of his stories the best is the double-sided card system, which also works with the game’s global scale and swashbuckling tone. Sadly, this mechanic comes with its own drawbacks, namely making set-up more difficult.

The main reason I like ELDRITCH HORROR more than the other Arkham Files games is that it gives you more stuff: more items, allies, spells, etc. Some of these cards have two sides, and when you first acquire them the game instructs you not to peek at the other side. At various points, the instructions allow you to flip the card and resolve the text on the back. For example, you might cast a spell, but then you’ll be instructed to flip it over and resolve a die roll to find out if that spell had a cost.

Lovecraft’s stories seem to be about an incomprehensible evil, something far greater than our minds can process. To perfectly adapt that into a board game would be impossible and unfun, but the card flipping system comes closest to replicating that sense of dread. What happens when you cast that spell? What is the mysterious mark that appeared on your skin? What abilities does that monster that spawned across the world possess? When you acquire any double-sided card, there’s a sense of uncertainty, an internal debate over whether you can afford to suffer its wrath if it gets flipped or if you need to get rid of it as soon as possible.

Similarly, this mechanic helps simulate the laymen nature of its protagonists: the various investigators. These are not superheroes, they’re ordinary people thrown into a world of supernatural power who must get by with their wits, weapons, and a little bit of luck. Of course they don’t know that casting a spell would cause them to take damage. This coherence is missing from a Dungeons and Dragons campaign with a grandiose character backstory and level one stats, and fits in with Lovecraft’s position on humanity’s insignificance and the down-to-earth protagonists of his stories.

The appeal of these card flips helps explain the varying reception to the game’s expansions. Despite creator Fantasy Flight’s promises of not overloading the market with new content, there are currently eight expansions for the game. These can be divided into roughly two groups: bix box and small box. Small boxes, like FORSAKEN LORE, feature new cards and the occasional minor new mechanic, while big box expansions, such as MOUNTAINS OF MADNESS and THE DREAMLANDS, also add new sections to the board. 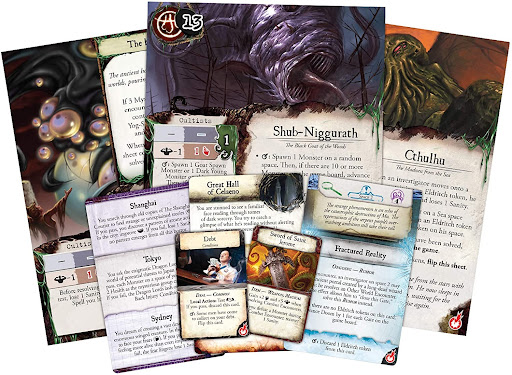 Every discussion I’ve seen online has largely favored the small box expansions. ELDRITCH HORROR is already a game with slow movement and few abilities to help with that; one of the common complaints about it is that it is hard to help out a teammate dealing with a werewolf in Istanbul while you’re stuck in Antarctica. People don’t want more area that they have to travel over; they just want more cards to explore and use, and flipping cards is a large part of that.

I’d love for this mechanic to feature in other games, and in an era where story and narrative are growing in popularity, they seem like a decent alternative to a massive book of paragraphs that you’ll be instructed to flip through. ETHERFIELDS, a recent massive campaign game, has you draw cards to help set up the world and the unique rules for individual missions in addition to reading from the book. It was so much more satisfying to just draw one of those cards than to flip through its tome of a narrative booklet and its literal thousands of entries.

The one major drawback I can think of to this mechanic is that it can make setting up the game more difficult. When games come with various decks, the easiest way to sort them is through their cardbacks. With two-sided cards, it’s harder to initially tell which deck is which, a struggle made more difficult in a world of kickstarter exclusives and bad rulebooks that lack a picture of the game components.

No one would argue that the Arkham games are a perfect adaptation of Lovecraft’s vision; sometimes you have to sacrifice theme to make the game more enjoyable. However, the double-sided cards come the closest to capturing his ethos while being a fun mechanism.