I don’t know what it is about this year (actually, scratch that, we all fucking know), but 2020 is where I’ve seemingly indulged the most in a practice which many may deem “artful timewasting.” And hey, it’s led to me discovering a slew of titles I may not have played otherwise, given my typical predilection toward huge, slow-burn RPGs. And while 2020 has certainly provided plenty of games to enjoy and keep the piecemeal trend healthy, from a retro point-and-click with a Junji Ito kick to a cozy life sim about death, I can say without a doubt that the newest entry on that list, HADES, absolutely steals the show as a piece of entertainment.

I’ll make it clear: Supergiant Games’ newest addition to the indie scene has had me absolutely obsessed; the thing’s only been out of Early Access less than a month, and yet I have somehow clocked in 70+ hours into its isometric Underworld without so much as batting an eye. And, frankly, it’s not unbelievable to think that number will double or even triple before the year is out and I will still yet to have siphoned every drop of sweet gaming ambrosia from it. And though part of the reason for the title’s apparent stranglehold on my attention is due to how strong the feedback loop is, the entire package, from its story delivery and character writing, to Supergiant’s trademark aesthetic, keeps me addicted and coming back for more. 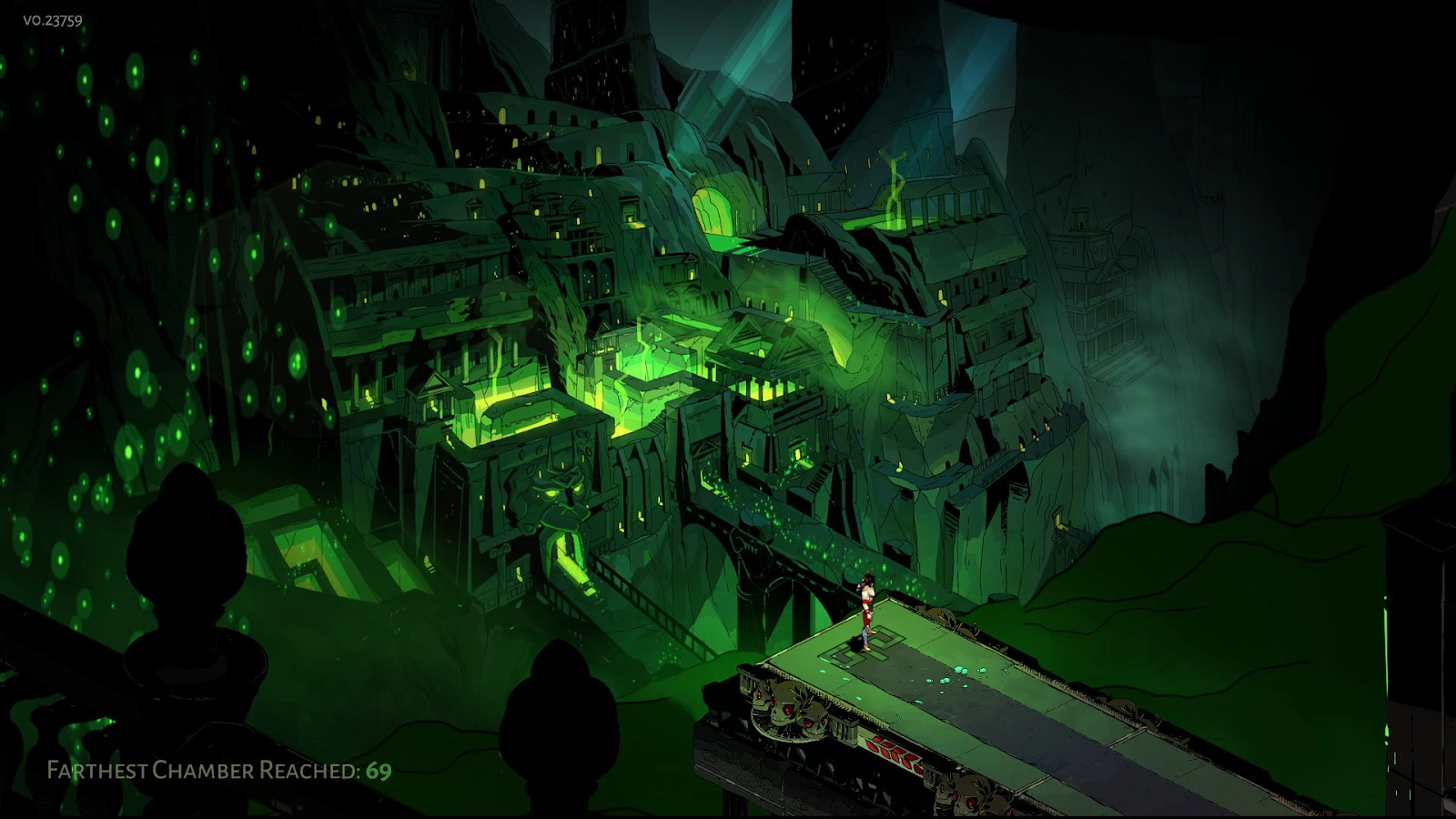 Everything the light touches… wants you dead.

Our sordid tale centers around Zagreus, son of the eponymous God of the Dead, and his repeated attempts to flee the Hellish confines of his abode in order to reach the surface and kick it with his extended family on Mt. Olympus. But escape is no easy feat, and with all the traps and countless legions of shades in his father’s employ running defense throughout the shifting Underworld, it’s on you to hack, slash, and dash Zag’s way to freedom with whatever help you can get before he draws his last breath… in which case, you both wind up right back home to chat it up with some chthonic colleagues and prep for another go. Grecian carnage (and daddy issues) ensue.

Right off the bat, the game’s action is broadcast as a focal point of the experience, at least when compared to the rest of the developer’s catalog. Given the game’s roguelite status, this is probably for the best; if the main conceit of the journey is going to be focused on ripping through multiple waves of the dead and meeting frequent gruesome ends along the way, it might as well be entertaining as it all goes down. And entertaining it is, as each run throughout the eye-catchingly stylish planes of Tartarus, Asphodel, and beyond do the premise proper justice, steadily evolving its simple starting encounters into a dizzying flurry of slashes, wall-slams, and projectiles as you traipse from room to room, generating this tense rush of snappy mayhem regardless of your approach.

It’s a tight, perfect distillation of Supergiant’s previous work in BASTION and TRANSISTOR, coaxing the player onward and keeping the adrenaline high with every new challenge that gets thrown your way, while likewise demanding your focus as you zip across the screen and ascend each generated floor to face increasingly rigged layouts and reflex-heavy brawls. Yet even should you inevitably fall to some brutish spikes or kamikaze chariot, the brief sting of defeat and subsequent return to The House of Hades only serves as incentive to jump back in and ride the high of getting as far as possible. Because with HADES, death’s not so much a roadblock as it is a teaching moment and a chance to take a breather. 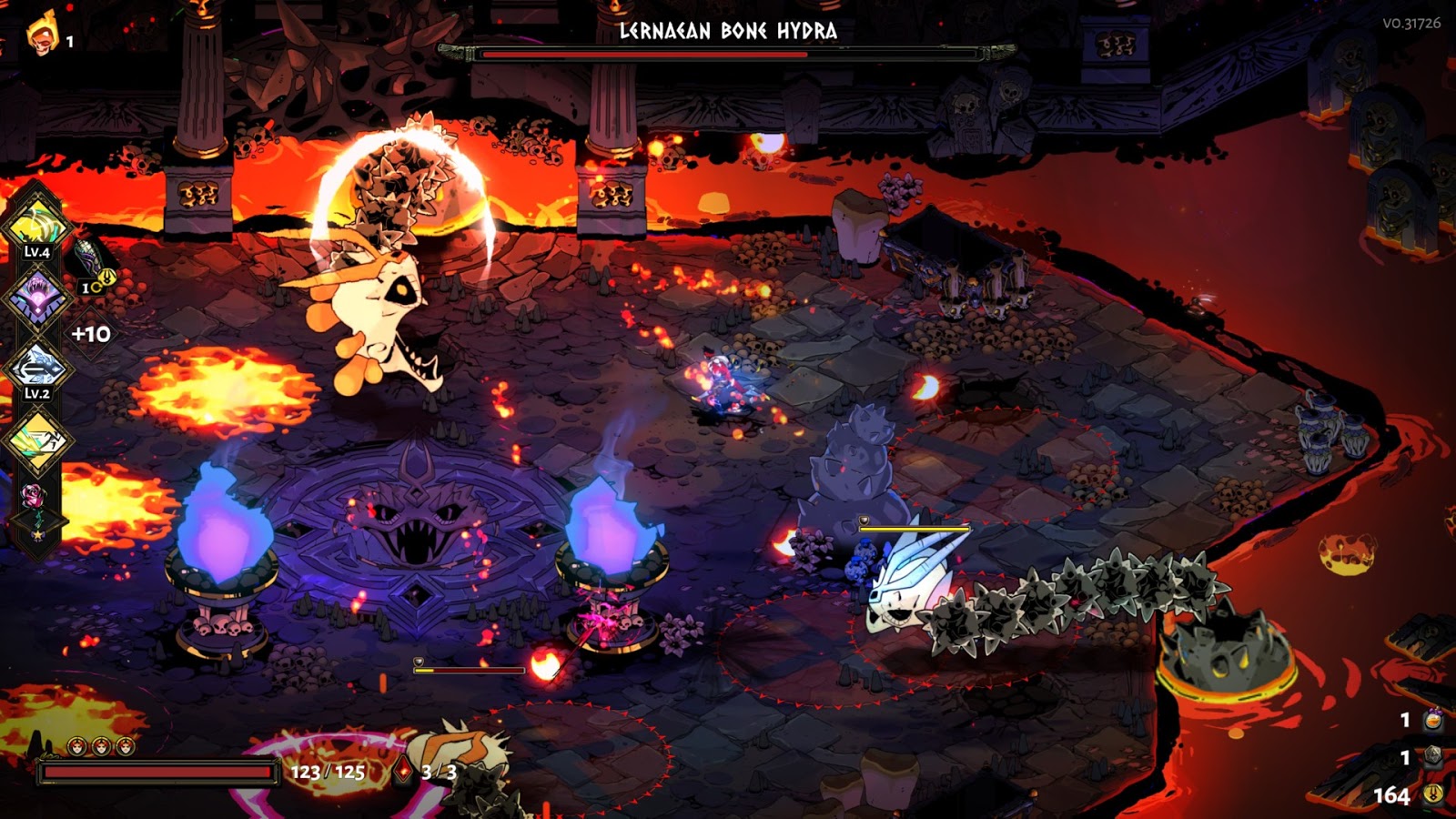 If only you could hear frantic button mashing through .JPEGs

Of course, these facets only get accentuated by all the variability between your runs through the labyrinthine layers of Hell, be it in the form of what weapon playstyles and keepsakes you don, to the enemy variety pitted against you at every turn, to what brand of room rewards you can reap for successfully eluding death another moment. And while having some elements of a run change-up per cycle is kind of the MO of the genre, the way that these elements interconnect and build off each other in-game not only per attempt, but between them, both demands experimentation and essentially turns every subsequent session into a different experience.

You basically get two layers of progression toward the loop with every attempt, with one having the collected resources of past runs accumulate to get pumped into Zag for future survivability (raising default health, adding extra beneficial mechanics to the dungeon, etc.), while the other directly affects the upgrades and boons from the gods that will be available to you during your current run, making the hunt for a potent build all the more possible the more time you sink in. The latter in particular is where HADES’ gameplay shines brightest, letting you drastically influence each run through your own mixing, matching, and even combining of powers to create some real fun setups. Anything and everything is viable down in the throes of the Underworld, and the way HADES consistently opens up the realm of possibilities with every additional attempt kept me coming back for the long haul. 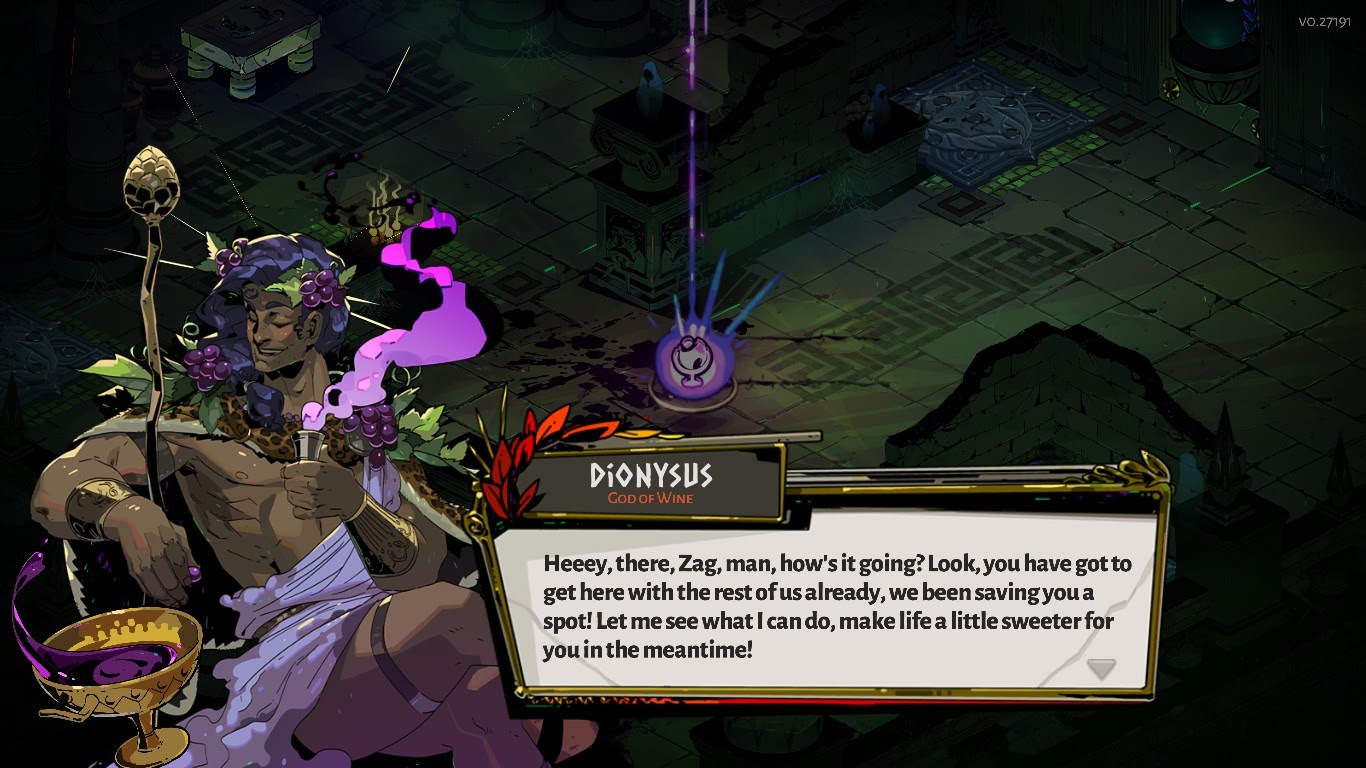 As enjoyable as the main draw is, though, the parts that elevate HADES from a solid “good” to a resounding “great” ultimately come down to more than just action fidelity; the game’s greatness comes from the sheer character channeled through the presentation. Even if you’re one of those people familiar with the developer’s track record for delectable writing and killer aesthetic, it is still genuinely surprising just how well the more “artistic” elements of HADES marry into the roguelite experience, especially for a genre of game that isn’t especially known for either. Every interaction just exudes a charming, tongue-in-cheek affability that endears as much as it entertains, from the snarky comments of your Olympian cousins as they gift you aid, to shooting the breeze in The House of Hades, to seeing what new inventive shit-talking goes down with a certain boss in Elysium after you kick his smug ass for, like, the 20th time in a row. Because of the game’s storytelling method of instancing the worldbuilding and overarching narrative into these bite-size character snippets once per cycle (and having the cast actively remember every time they chat to you), the delivery of the writing ends up complementing the roguelite structure, making the prospect of dying almost as fun as the action just out to it meaning more opportunities to hear these colorful lore tidbits and juicy hot takes on your progress.

And, as with every Supergiant venture, all of this is capped by an absolutely amazing soundtrack that looms over every aspect of HADES, practically as much a character as anything else present. Whether in the hard rock lute and electro-bass punctuating your assault through the green haze of Tartarus, or the captivatingly somber tones of “Good Riddance” whenever you come across a reprieve with Eurydice, the music that permeates your trips through the Underworld does so much to give the staging and tone a unique livelihood, adding a savory complement to what’s on screen even in times where you may not pay heed due to how hard  you’re trying to keep Zag from expiring. 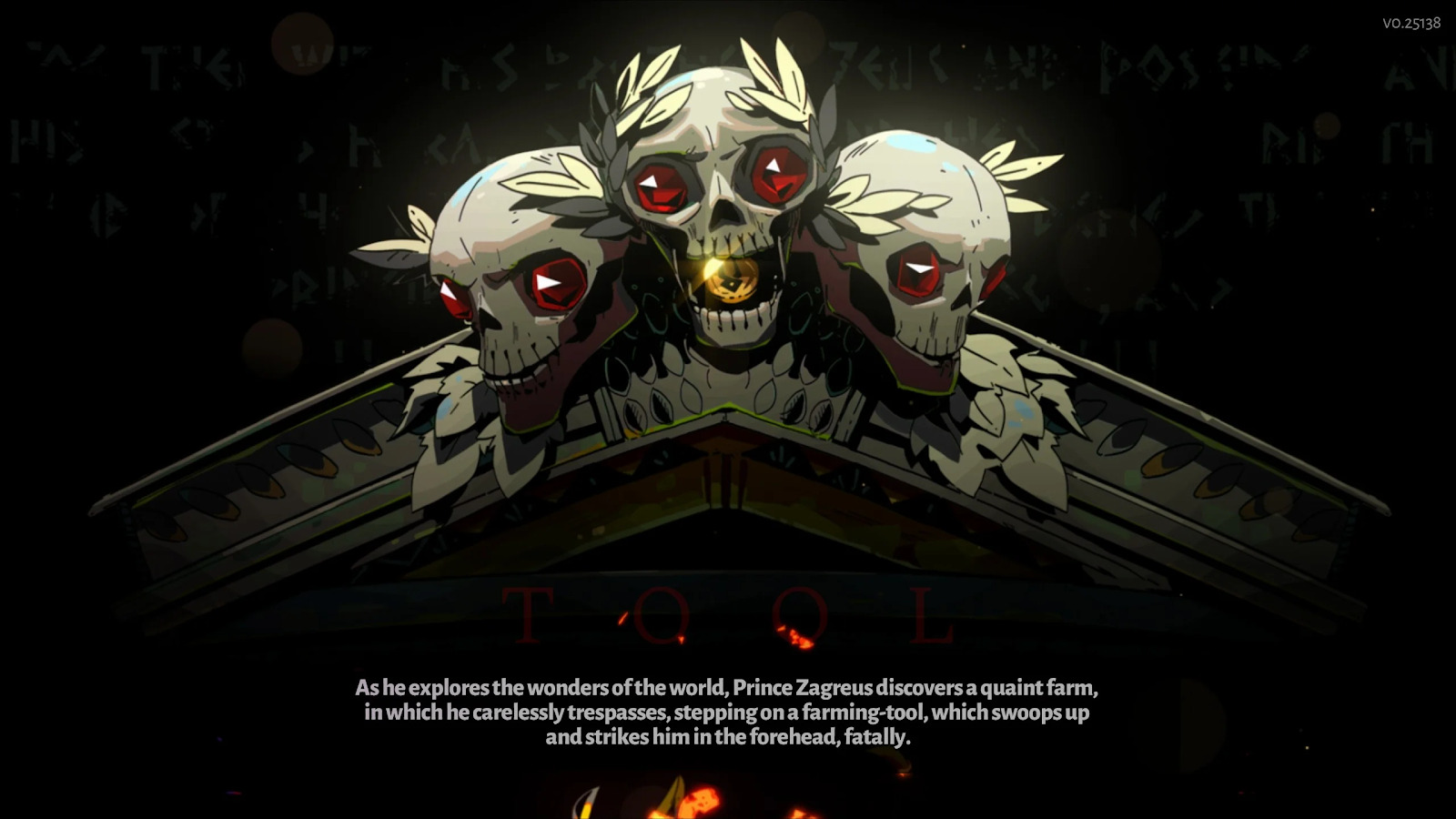 Comedy and Tragedy, balanced as all things should be

When all’s said and done, this indie offering is more than just a solid roguelite or another successful notch in Supergiant Games’ belt; it’s a dense, polished, and thoroughly addictive experience that stands out not only in the genre it occupies, but the industry as a whole. HADES is that rare breed of entertainment that infatuates and continues to unveil more to adore no matter how many times you go through the cycle, entranced by its gameplay and its storytelling in equal, seemingly boundless measure. Every end you meet, successful or otherwise, greets you with a simple, chthonic truth: “There Is No Escape.” And with how readily HADES has been able to deliver some of the best times I’ve had this year, I am very inclined to agree with them.