“Innovative.” “Revolutionary.” “Trendsetting.” These are all words that, at least personally, have lost some of their bite the past few years. I mean, it’s essentially standard procedure for us folks reviewing media to throw in the occasional buzzword or hyperbole these days if it means pulling more eyes to the screen, or driving more traffic to the things we enjoy. And yet, I still often refrain from the use of these words out of principle, if for no other reason than to retain some measly semblance of their value. These are words meant to denote more than just an arbitrary distinction from the norm; they provide a testament toward exceptional success, works that leave such a significant impact on a culture or industry that their mark can be felt years after their novelty wears off, setting a precedent for all to follow. And, if we’re being frank, there realistically isn’t a game in recent memory more befitting of that description than MINECRAFT.

It’s highly doubtful that there’s a soul today who’s not somehow found themselves in the voxelated vice of “the Everything Game,” whether through genuine interaction or vicariously through others. From its official release in 2011, it has held dominion as the go-to in casual entertainment, attracting people of all ages with the freedom to do as they please on its blank canvas, whether it’s creating adventures of their own conceit or building elaborate, interactive artworks for hours on end. And with an audience 180,000,000 strong and a presence across every conceivable console save the Samsung Smart Fridge(™), it would be easy to chalk up MINECRAFT as undoubtedly one of the most ubiquitous properties to ever exist, game-related or otherwise. However, the IP’s status as a household name is only as telling of its success as we allow it to be, and with MINECRAFT, there is so much more of value present than what a simple sales statistic can communicate. Were I so bold, I’d go so far as to say that game’s influence, intentionally or otherwise, has had its blocky hand in shaping just about every facet of gaming throughout the years, from the technical level all the way to gaming’s cultural acceptance in the zeitgeist. 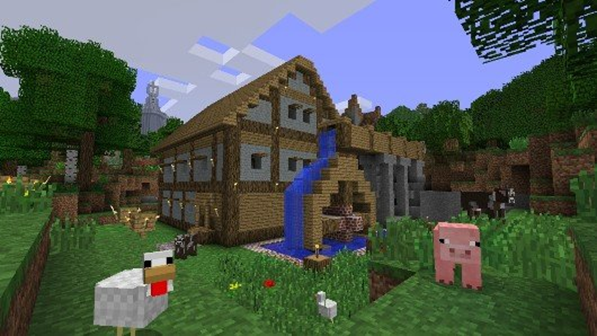 Step 1: Set the foundation. Step 2: Stare into the void

If we’re to evaluate MINECRAFT’S influence on gaming, then there’s probably no better place to start than the territory most pertinent to us as players: game design. And considering the gaming industry’s tendency of latching onto anything popular and applying it toward every situation, even as far back in 2011, it should come as no surprise that MINECRAFT’s successful launch all but guaranteed its DNA would find its way getting worked into nearly every release thereafter in some fashion, in the hopes of replicating that success.

By name alone, you could easily attribute the medium’s current abundance of “crafting” systems to Mojang’s handiwork, filling out and meticulating our virtual experiences regardless of whether a game calls for them or not. It’s now practically a staple of video games as a whole, visible across every genre of the past decade and appearing in every permutation imaginable: from being a frequent necessity in monumental RPGs like SKYRIM or THE WITCHER 3, to base building for the likes of FALLOUT 4 and DON’T STARVE, to even having a place in cinematic experiences like THE LAST OF US or ALIEN: ISOLATION. And while most of these titles may not expressly utilize their crafting system as a major factor of their game’s respective appeal, it is undeniable that their proliferation in the experience comes courtesy of MINECRAFT’s status.

Equally as important to MINECRAFT’s identity, the game’s Survival Mode triggered a completely different chain reaction: generating a genre in and of itself. If ever you’ve been plunked down in a procedurally generated world with the goal of surviving as long as you can by gathering resources or managing some kind of hunger meter, whether it’s ARK: SURVIVAL EVOLVED, RUST, THE LONG DARK, or even NO MAN’S SKY, you can be certain that they’re riffing off the MINECRAFT formula pretty hard. This style of gameplay is still as much an industry standard as it was years ago, bleeding into different niches like last year’s post-apocalyptic DAYS GONE and 2018’s WE HAPPY FEW, as well as essentially being a requisite in a number of game’s “Hardcore” difficulties throughout the gaming scene. And while I could continue checking off the laundry list of other influences in the space, like catalyzing the AAA industry’s whole “open-world” obsession or exposing us to the topic of procedurally generated simulation, I think it’s safe to assert that the blocky behemoth has made a pretty substantial mark on the mechanical side of things. 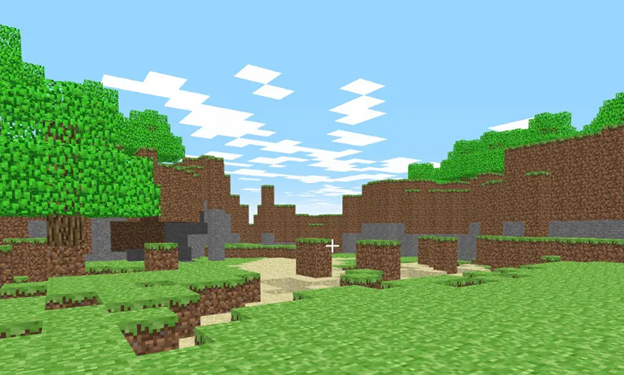 2009: Harsh on the eyes, but rife with opportunity

Of course, there’s more to games than their technical components; the time, effort, and especially resources involved in making sure they all connect and come to fruition are equally as important as the unveiling of the finished product. And, as it would happen, MINECRAFT essentially shaped our perception of how the game-creating process operates as well. In fact, it accomplished it well over a decade ago, back in 2009. People tend to forget this tidbit, but before Microsoft bought the rights to the game for a cool $ 2.5 billion, this building game started its life as an indie title, one Swedish guy’s passion project. More than that, though, it was a project sold under the pretense that it was still a work-in-progress, offering audiences the opportunity to play the game while in its “alpha” stage for a paltry sum, in exchange for constructive feedback and the promise of receiving the finished version of the game for free whenever it was completed.

And, somehow, that not only succeeded, but did so spectacularly; during that alpha phase alone, Notch was able to use the funds it generated to quit his day job, hire on a small team, and actively set the framework for the game we would eventually know and love today. In that way, MINECRAFT was the progenitor of the Early Access model, showing the viability of having an audience actively aid in the process of development and the culture needed to sustain it instead of the developer hiding behind years of veiled secrecy with crossed fingers that whatever came out the other end would be “acceptable.” It gave rise to the indie game boom we’ve been experiencing all throughout the decade, letting games like SUBNAUTICA, DAY Z, and, Hell, half the bestselling games on digital marketplaces like Steam and GOG see the light of day. Just to drive the point home at how much this has affected the industry, even massive titles like the monolithic FORTNITE, as divisive as it may be, arguably wouldn’t be as successful as it is today were it not for the groundwork MINECRAFT paved the path for, let alone exist at all. Having a title like MINECRAFT find economic success is one thing, but the fact that a single game, let alone one made effectively by a single person, could have such a profound impact on the entire economic structure of the gaming industry? That’s worthy of admiration in its own right. 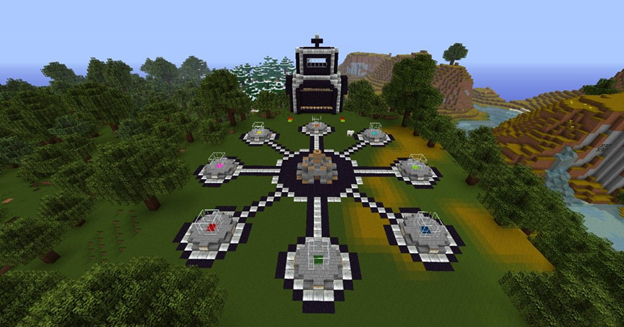 …also, putting it out there, Minecraft Hunger Games > FORTNITE

However, I would argue that even that is not MINECRAFT’s biggest achievement. No, that honor goes to MINECRAFT’s influence not only on other media, but how it effectively shaped society’s views on gaming culture. Take, for example, its presence on platforms like YouTube: MINECRAFT rose to prominence during a very integral time in YouTube’s lifespan, the start of the Let’s Play craze. And while not completely responsible for one of the site’s most prominent vehicles for entertainment, it definitely had a pretty big part in popularizing gaming videos on the platform.

You had thousands of content creators, not just ones who’d gain notoriety like PewDiePie or DanTDM, but all types of young and creative people all converge under one platform to share the stories and worlds they created, communicating with each other about how the game worked and explaining what the Hell the game was to audiences a hundredfold. You’d have seperate sects of people creating videos of them playing with friends, some that focused on building massive cityscapes and historical recreations, some people trying to unlock the logic of redstone, some lore historians. All of it, parsed from MINECRAFT. And as time has gone on, these types of videos remain among the most viewed material on the platform, raking in millions of viewers who may not even play the game themselves. Whatever your opinion on either platform, the symbiotic relationship between the creative elements of MINECRAFT and the social elements of YouTube made for the perfect combination, helping both avenues of expression grow to new heights. 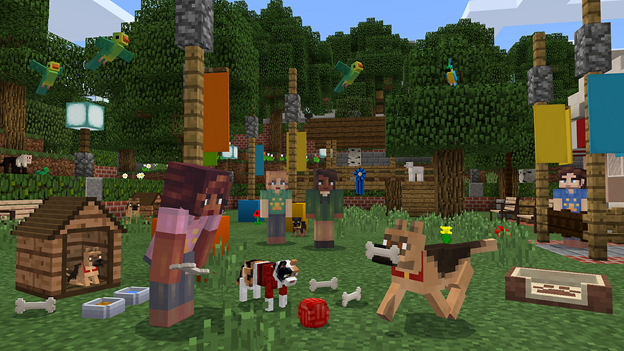 “It Takes A Village”… or something

And this growth of the MINECRAFT platform, this wave of positive attention for the communities playing and sharing the game, didn’t just stop at YouTube. It continued expanding, and still does to this day, because it did something very few contemporary video games manage to do on such a broad scale: it connects with people of all ages. It’s a departure from the predominantly violent and “adult” tone set by franchises like Call of Duty or GTA, a departure from games needing to look as gritty and realistic as possible, instead opting to make a simple, constructive experience that allows everyone, even children, to express themselves. And as a result of this accessibility, it’s created avenues for gaming culture that may have never existed without it. It’s used in schools use it to teach kids everything, from math and physics to ecology; it’s found a place in therapy for helping individuals with autism and PTSD develop prosocial behavior; and for the average person, it remains the gaming industry’s greatest testament in bringing all walks of life together.

Whichever way you choose to look at MINECRAFT and the impact it has made on gaming as a whole, whether as a trendsetter, a happy accident, a platform, or a meme, one thing remains certain: its legacy in bringing people together in limitlessly creative ways far exceed just about any game that’s come before it. I’m not sure what, if any, game will come close to replacing MINECRAFT when its time inevitably comes, but whatever it is, it’ll be standing on the shoulders of giants.