In the introductory sequence of WE HAPPY FEW, player character Arthur makes the bold decision to not take his daily-mandated Joy pill. As the day progresses and his Joy begins to wane, cracks begin to appear in the facade of Wellington Wells, the idyllic utopia Arthur calls home. The lights appear dimmer, wallpaper seems damper, and clouds become dark and menacing. On his way out of the office, Arthur gets dragged into a party as his coworkers smash open a pinata. As the only person in the room aware that the colorful paper critter is actually a dead rat, Arthur watches in horror as the people around him tear it open to scoop up the “candy” inside.

Set in an alternate 1960s England after an even more devastating incarnation of World War II, the world of WE HAPPY FEW is split between two versions: the dream paradise that those experiencing the hallucinogenic effects of Joy are able to take solace in, and the grim, post-apocalyptic reality that lurks just beneath the surface. “Happy is the country that has no history” is the motto that must be upheld, and the club-wielding bobbies of Wellington Wells strictly enforce the use of Joy in order to maintain that illusion. The “Downers” that refuse to live in ignorance are exiled to the bombed-out countryside and forced to fend for themselves.

In this world, players take control of three characters across various stages in the narrative, each with their own motivations for exploring, and escaping, the drug-fueled hysteria of Wellington Wells. Along the way, they unravel the truth about the city’s past and why the use of Joy appears so necessary. As the citizenry goes out of its way to collectively forget the “Very Bad Thing,” their own personal traumas are erased as well, and each of the player characters struggles with what, or who, is missing from their lives. 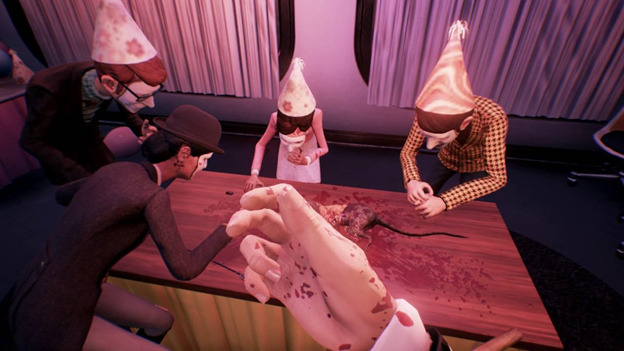 As a story-focused exploration piece, WE HAPPY FEW is superb, accentuated by an excellent voice cast and score. Like something you’d get from the hellish union of BIOSHOCK and THE LEFTOVERS, the game is poignant, unnerving, and often hard to watch; what it lacks in subtlety is more than made up for in sheer eeriness. Eventually, though, the Joy wears off and the ugliness beneath rears its head. When the player isn’t taking in the sights and absorbing lore, they’re interacting with the game’s myriad of hostile NPCs, and this is where WE HAPPY FEW’s pinata is revealed to be a rat.

As a modern survival-horror title, there is unsurprisingly a large reliance on stealth in WE HAPPY FEW, but I’m sorry to say that the implementation of this element is some of the most primitive I’ve seen in years. Players are often required to sneak into guarded areas, whether they’re installations patrolled by bobbies or the warrens inhabited by the equally violent Downers. In either case, these enemies are lethally stupid, and there is rarely any reason to stray from one of the many bushes that renders the player nigh-invisible, wait for the guards to rotate to the next point of their simple routes, and scurry ahead. If I ever even thought I might have difficulty with a patrol, I would just throw a single glass bottle a couple of feet away and every NPC in a 10-block radius would go sprinting off for minutes while I easily just stepped by. 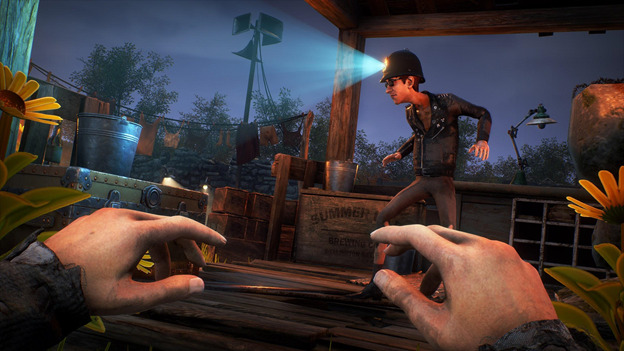 As is the case with all bad AI, however, one in 10 guards will suddenly gain clairvoyance. There were times where I’d be spotted, out of sight and earshot, and have the whole neighborhood come down on top of me. Other times, I would attempt to kill a guard from behind, only to be standing just off of the spot the game wants me to be in, turning a silent takedown into a blaring alarm. This is the catch-22 of WE HAPPY FEW: When you successfully sneak past an outpost, it’s unsatisfying, and when you fail, it feels unfair. Getting caught isn’t a game over, however. Instead, you get something far worse: combat.

I’ll start off by saying that real-time melee combat can be very hard to replicate in a video game due to the inherent “lack of weight” to any motion on screen when tied to a single button press, but there are many games that demonstrate how to make each swing of a sword or lead pipe satisfying, from the frenzied duels of DARK SOULS to HALF-LIFE’s basic crowbar. But in WE HAPPY FEW, melee combat quickly devolves into each character bouncing around flailing around to hit one another, more akin to a foam noodle fight at the pool then scavengers fighting to the death in apocalyptic ruins. Hitboxes are dubious, functions are limited, and you’ll often be horribly outnumbered, so kiting in circles to regain stamina becomes necessary. I spent the entire game desperately trying to avoid combat at all costs, more from aggravation than any real challenge. 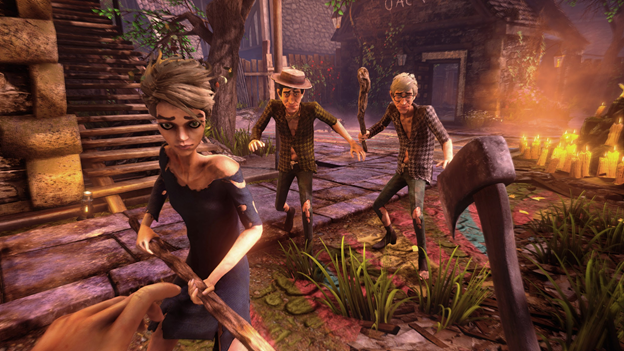 With WE HAPPY FEW, I wanted to delve into the intriguing, two-sided world, but I often found myself being dragged between two separate games. For every snippet of slow-burn mystery into the dark underbelly of Wellington Wells, there were long swathes of mediocre stealth, unwieldy combat, or a variety of other ill-conceived systems. I haven’t even mentioned the incongruous crafting and survival mechanics that it feels like the devs forgot to remove from the game’s early access days, nor the myriad of technical issues I encountered during my playthrough. On Xbox One, the framerate frequently dipped to slideshow levels, and textures never seemed to load properly.

Perhaps this duality was intentional, the gameplay designed to echo the rift between the two worlds: a veneer of wonder and fascination layered atop a broken system of misery and frustration. It wouldn’t be the first time a game was built around metatextual principles rather than the sake of “fun,” but I have a hard time justifying the $60 asking price here. There is so much potential lurking within Wellington Wells, but the systems that keep it going actively get in the way of my enjoyment. I wish I could be one of the happy few to be able to look past the flaws, but make no mistake: this game is off its Joy. 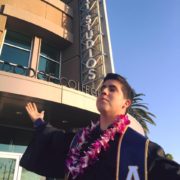 What You Could Be Watching Instead of INSATIABLE

IN THE CROSSHAIRS Episode 33: The Final Episode