I have to applaud the folks at Shiny Shoe and Good Shepard Entertainment: Few indies released in 2020 outside of HADES were able to capture hearts and minds amidst a relative gaming drought the way MONSTER TRAIN did—and justifiably so! Even if it didn’t quite reach the levels of widespread mainstream memeable appeal as HADES (and let’s be honest, few indie games on that level ever have), quickly becoming a respected roguelike deckbuilder game that could be mentioned in the same breath as SLAY THE SPIRE is no small feat. From the quick and addicting gameplay to the vast scalability and customization, it makes sense that it debuted last year to near-universal acclaim.

But ultimately the reasons to praise what Shiny Shoe have slowly built over the last year don’t end there—MONSTER TRAIN is gunning for the proverbial crown through constant updates and modifications and it’s been impressive to see unfold. Two rounds of DLC hit last year, WILD MUTATIONS and FRIENDS AND FOES, both dramatically altering the game’s possibilities without sacrificing the core strengths. Added clans and cards, with slight adjustments to the game structure, have continued to build variation and strength to what was already one of the freshest-feeling titles in the emerging genre. The arrival of MONSTER TRAIN’s latest round of DLC, THE LAST DIVINITY, not only further cements the endless replayability of a game that already had high marks in that area, and drastically puts it in contention for the best roguelike deckbuilder of all time. 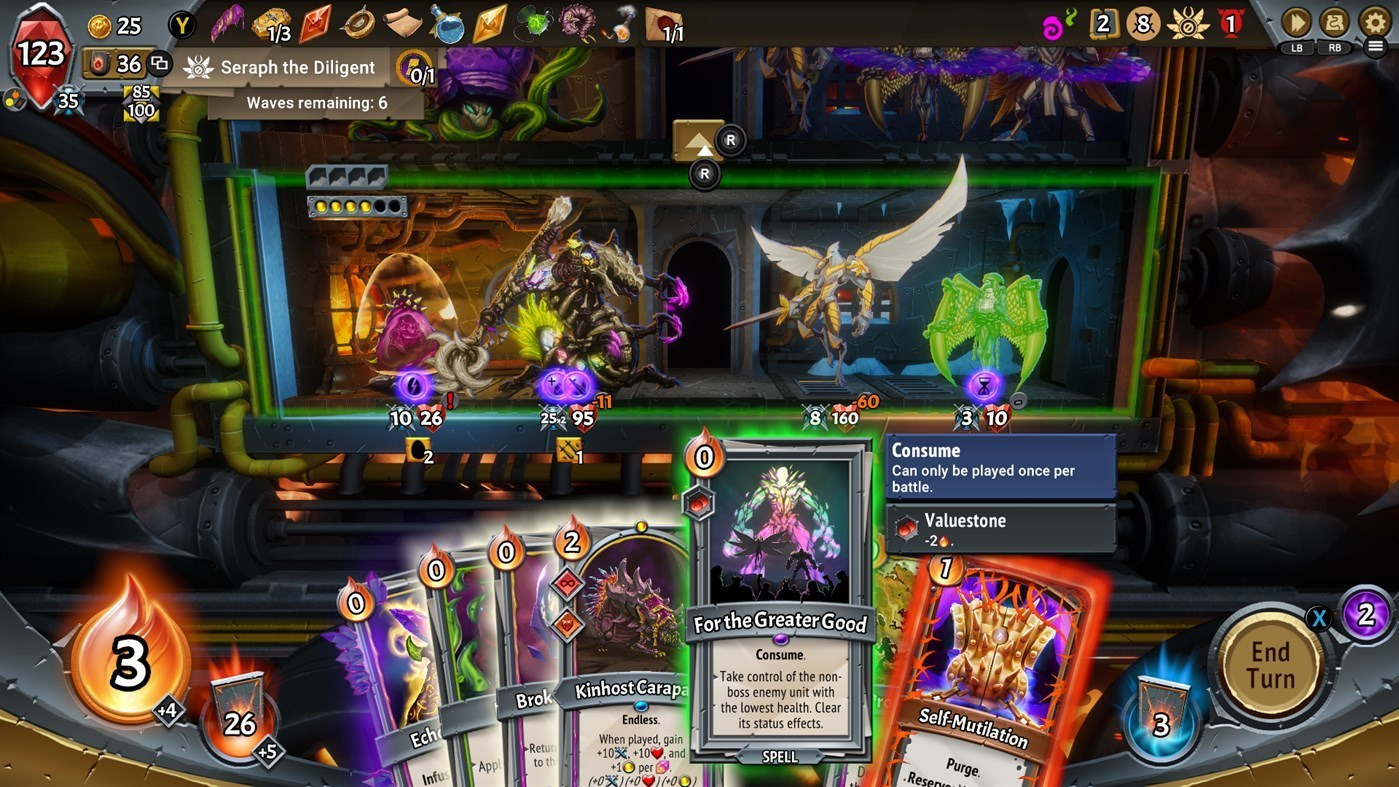 The base gameplay of MONSTER TRAIN is simple. You are driving a SNOWPIERCER-like, multi-floored train filled with monsters through heaven and hell. That last detail isn’t worth flagging—ultimately the title of this game is nothing if not direct, it’s a train with some awesome looking creature designs, each with their own brilliant look and feel. Taking cues out of other successful monster brawl games, there is an artistic brilliance on display from the sound design to the creature movement to the attack effects. It’s amazingly well thought-out. And, if you’re wondering exactly why it might be on a train given it could easily be serviced in a stationary location, well, it’s because Shiny Shoe just thought trains would be cooler. Who am I to disagree?

Your train progresses from level to level and each round, enemies climb aboard to try and take it down. As levels progress, stronger and bigger bads begin appearing. Using a random deck of cards assigned to you at the start of the game, you unleash your own team of monsters and cast spells to try and upgrade each floor to prevent enemies from climbing to the top and draining the train’s pyre. These spells vary in nature; they might be directly doing damage to enemies, they might be fortifying your own monsters, or they might be making lasting effects to the train itself, oftentimes by upgrading the number of units that can exist on the floor. There is a degree of tower defense strategy to building out your train—you’ll want bulkier units to the front, weaker units that maybe provide power ups in the back—but how you choose to upgrade those cards is entirely circumstantial to the battle itself and what cards to draw in early hands. The turn-based combat slows down the pacing, oftentimes relegating the combat at the end of each turn to a numbers game. 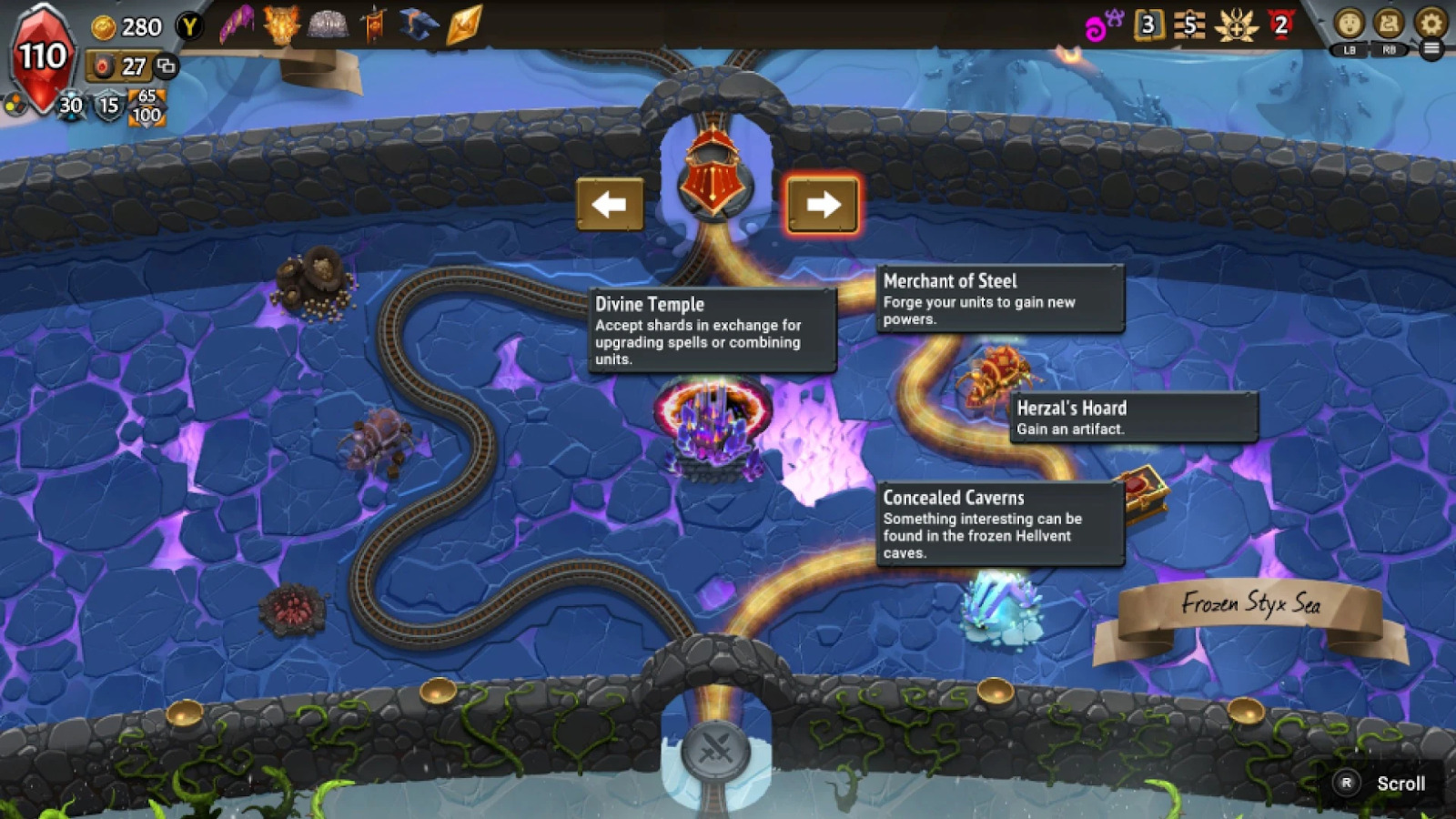 Between battles, you control the path of the train itself from a top-down map, riding the rails through stores where you can upgrade or duplicate cards, to Covenant Caverns where random non-battle events will occur, and potentially stopping to gain more health if the train has been attacked. What cards and monsters you’re upgrading and how you choose to navigate this path are largely dictated by what clans you’re playing as. Want to do lingering damage to opponents through frostbite? Try the Stygian Guard. Want to build up health and regen to keep units around longer? Try the Awoken clan.

And here’s the thing: MONSTER TRAIN on release already had incredibly high replay value the way most roguelike games do. No one run is the same, and especially having to pick primary and secondary clans means strategy will inevitably change over time. Both sets of DLC from last year only furthered the endless possibilities in terms of how to modify and adjust your run; particularly in the multiplayer component of the game where you are not in control of what clans you’re assigned, adding more clans diversified the game exponentially. Learning to feel comfortable adjusting to strategy becomes essential—knowing the ins and outs of the Stygian Guard is great, but when the game assigns you the Umbra clan, which is reliant on building out armies of morsel units to slowly build up monster stats, you have to become familiar with a new type of play.

WILD MUTATIONS and FRIENDS AND FOES were further proof that MONSTER TRAIN’s formula as presented could keep seeing minor updates for years to come and even the smallest of tweaks would bring new life to the gameplay. THE LAST DIVINITY is no exception. There is a new clan, itself an upgrade worth the price of admission, as well as new Covenant Cavern events, new artifacts, and new cards tied to the preexisting clans. That new clan, Wurmkin, introduces two new game mechanics. The first, Charged Echoes, builds in a power meter of sorts to each room of the train. Playing certain cards adds gems to respective rooms that then can intensify or level-up spells and monster abilities. These gems also affect a new “reap” drain component that’s been introduced with this update, a health drain on opponents which, similarly to frostbite, will slowly deplete health from enemies passively at the end of your turn. The second, Etch Ability, allows you to hatch stronger shelled units over time, a way of building an army further into the battles presuming you can keep those units alive for the shells to hatch.

Like previous updates, introducing a new clan makes THE LAST DIVINITY a worthwhile purchase, but Shiny Shoe have gone a step further by introducing larger core game elements that entirely overhaul MONSTER TRAIN into a new game from the one introduced last year. The first is the implementation of pact shards; like stores where you can buy card upgrades or artifacts, now Divine Temples pop up at each stop along your way, allowing you to gain the shards in exchange for massively powerful upgrades ranging from fusing monster abilities together to gaining money or artifacts to implementing massive spell upgrades. It comes at a price, though: the more pact shards you obtain, the more powerful your enemies become throughout the duration of the run, a monkey’s paw of sorts. MONSTER TRAIN was already great at forcing players to bet on themselves, allowing you to toggle upgrades to the enemies before battles for extra potential rewards and higher scores, and the pact shards double down on that concept, increasing the potential for a higher final score but also increasing the difficulty of the entirety of the run rather than simply an isolated battle. Choosing to over-modify a card, or modify the wrong card type, can become far more deadly long term as enemies become stronger and stronger, but by the same token it can slow the game down when done correctly. It’s a brilliant new mechanic, and one that adds a much welcome new brand of chaos.

The pact shards lead to the game’s other new component: a new final boss named The Last Divinity. While The Last Divinity exists in every run of the game now, your ability to fight it and go for gold rests largely on your aggressiveness playing through the previous levels, as you’ll have to acquire at least 100 pact shards for the battle to open up. Particularly on multiplayer runs or for those checking various leaderboards, fighting The Last Divinity isn’t optional—the question is how far beyond the minimum 100 shards you want to go to increase your score, and given how exponentially harder the game becomes with them, it’s an interesting line to toe early on. The boss battle itself isn’t much to write home about. The Last Divinity attacks all three levels each turn and does so from the start of the battle, but oftentimes the fight itself is fairly easy—you were able to access the battle in the first place after all. But the fact that the access to the final boss itself is contingent on your making the rest of the game harder is a great update, and can make routine early levels feel tougher.

MONSTER TRAIN: THE LAST DIVINITY is a substantial and beyond-worthwhile slice of DLC—just take a quick look at the rundown of updates that come with it, it more than justifies the price. But with it, Shiny Shoe is really making a case that MONSTER TRAIN is the best of its type, not only through the update itself but through a proven commitment to periodically shift the games larger mechanics. While it quickly became a pandemic staple for myself and many others, it’s easy to see with THE LAST DIVINITY that it’s a game that isn’t going anywhere anytime soon. Just how much its legacy will grow within the genre over the next few years, though, is something that’s worth tracking, because this train isn’t slowing down.