It was the best selling debut album of the 21st century. Nu-metal had been successful beforehand, sure, but not on the world-conquering level that Linkin Park reached with 2000’s HYBRID THEORY. It combined authentic hip hop, radio-friendly metal, crisp production, the unique chemistry of their dual vocalists, loads of angst, and simple yet effective melodies into a singular record, at least until the follow-up METEORA repeated its formula to greater effect. A band who got big too early that has fought for a clear direction ever since, the suicide of lead singer Chester Bennington was just the latest in a tumultous career of demanding fans, changing trends, and endless memes about “In the End” and “Crawling.” Though their quality has often been debated, their experimentation, relevance, and unique spot in pop culture cannot be argued, as even memes that are meant to mock and jeer reveal how representative they are of an entire zeitgeist and time period. 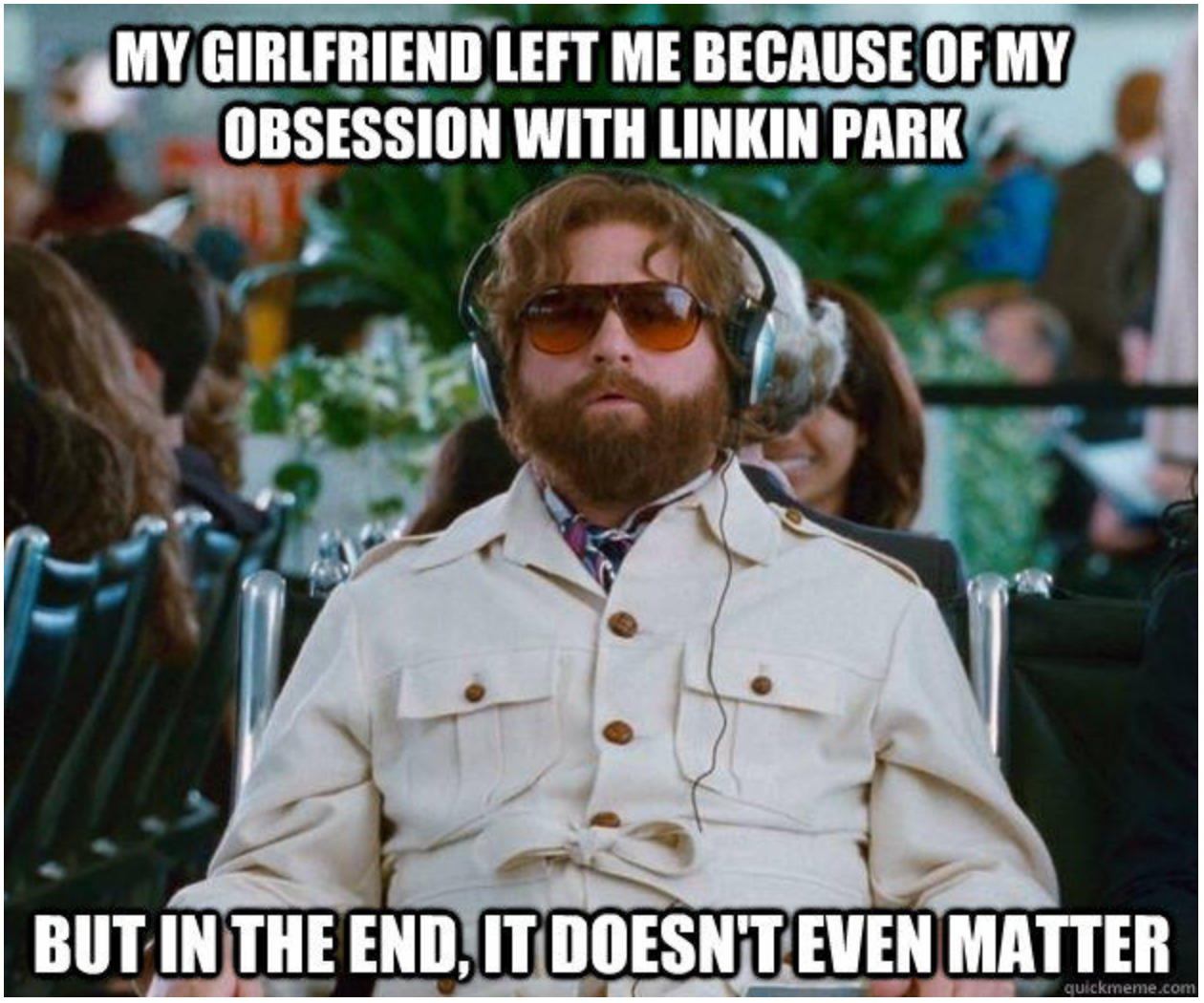 On one hand, I don’t like to fetishize millennial and Gen Z internet culture as some mystical, impenetrable thing immune to logic and reason, motivated by the arrogant notion that they are the only generations to have ever suffered and memes are driven by this deep, untreatable pain; the common idiom of explaining humor being akin to dissecting a frog is flawed because you don’t usually dissect frogs that are alive in science class. And yet, just because you can trace something on the internet does not mean you understand it. I can offer theories as to why “In The End” and “Crawling” persist in the memeverse, yet few answers will probably prove sufficient.

The enduring legacy of “In the End” is a little easier to explain than “Crawling,” simply because it was a bigger radio smash—even those that are cold toward Linkin Park could probably recite a good chunk of the first verse. It has been memed due to its lyrics, especially the hook, and evolved into more of a catch-phrase than a song. A similar phenomenon can be viewed in “I’m Too Sexy,” “What Is Love,” and “Last Resort”; much like a movie producing a memorable quote, these songs have produced phrases that have overtaken anything else about them. “Crawling” has some of that energy with its infamous opening refrain of “Crawling in my skin / these wounds will not heal,” yet the reasons for its internet footprint run a little deeper. 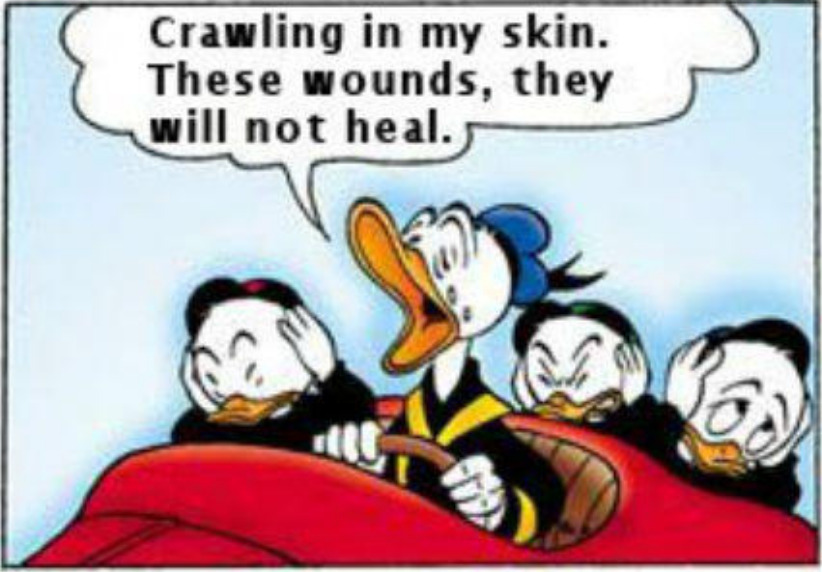 Ask yourself this: Why the Rick Roll? The 80s were filled with big, in your face drum machines, blaring synthesizers, huge power ballads, constant unyielding energy. So how did “Never Gonna Give You Up” become the song of choice for this bait-switch that dominates everyone’s perception of Rick Astley to the point that many younger people erroneously consider him a one-hit wonder? The answer comes in breaking the traditional format of songs. Almost every pop song has the structure of verse-chorus-verse-chorus-bridge-chorus: “Crawling,” “Never Gonna Give You Up,” “Last Resort,” and “Bodies” break this format by starting immediately with a hook or refrain. They give you no time to adjust yourself before thrusting you into the melodrama and angst.

To look at the specific facet of the internet that uses these songs, you have to look at AMVs. AMV’s, or anime music videos, are an internet phenomenon that usually focus on the combat-oriented, over-dramatic, typically shonen-jump anime like BLEACH or NARUTO that are what people who hate anime think all anime is like. They will either show a montage of single characters, or chop down a pivotal battle to only show the cool bits. The soundtrack for these are often radio metal and rock songs; further proof that wrestling is just anime for rednecks as both are the last refuge of this dying format. Linkin Park is among the most common picks for these videos, and it’s easy to see why. Many of these anime do revel in the same sort of hermetic, self-flagellating, over-the-top, unsubtle angst as “Crawling.” It’s similar to “Mad World,” “Let’s Get It On,” and “Gonna Make You Sweat (Everybody Dance Now)” in that the songs are effective at capturing a specific mood, yet they’ve been so overused to create that mood that they become a punchline to be used to make fun of ham-fisted attempts at that emotion.

The time period of these anime also must be taken into consideration. The 2000s were an embarrassment in many ways, but especially in regard to rock music. Evanescence, Nickelback, Creed: why did we give so much money to record labels back then? Even though we look at them with embarrassment now, these were among the biggest bands in the world at that time, and thus it’s impossible for everyone dunking on them now to not have enjoyed them at one point or another. Memes and internet humor become a way to redivert our embarrassment into something ridiculous and funny, to not feel so guilty about our past enjoyment and to enjoy it a different way.  Even as “Crawling” gets used to make fun of over-the-top angst, there’s still the acknowledgement that almost all of us have had an angry-white boy phase, and denying the song’s appeal is akin to denying where we were at one point in our lives. Those AMV’s function similarly, as they feature shows that were often people’s first step into the medium and may not hold up to modern eyes, yet they and the music in them were people’s first introduction to these sounds. Linkin Park and their side project introduced many white kids my age to hip-hop and industrial metal: same with Evanescence for goth and symphonic metal.

Jim Sterling once argued that the vast amount of porn made for OVERWATCH characters proved Blizzard were doing something right. In a similar way, when a lot of memes are made about a movie or song, it means that it resonates with people, though not necessarily out of quality. Though they stick with people for different reasons, there is something to be said about how these two songs are used in or as memes. Some might argue that people are simply making fun of them, but that’s too easy an answer. Linkin Park, and specifically HYBRID THEORY’s, continued presence in the meme sphere shows how connected they are to a certain time period, emotion, and age, which regardless of one’s thoughts on the music itself, has to be admired.