We live in a world where BOYHOOD is in the Criterion Collection and the candidate of a major party implicates himself in sexual assault and is still somehow going to garner a large portion of the popular vote (Which of these is more egregious? You decide!). Fortunately, we also live in a world where extremely talented homosexual men dress up as women and compete on television for a year’s supply of Anastasia of Beverly Hills Cosmetics and a cash prize of one hundred thousand nnn-dallahs! One of these extremely talented men is Brian McCook, more commonly known as Yekaterina Petrovna Zamolodchikova – the high-class bisexual Russian whore. (But your dad just calls her Katya.)

Reality TV is an excellent thing to put a lot of emotional stock into. You should absolutely put yourself in a position where the arbitrary outcome to a largely scripted competition series dictates the tenor of your entire weekend. So, was my weekend ruined by the outcome of the season finale of RUPAUL’S DRAG RACE ALL STARS 2?

In an unfortunately not-so-shocking twist, Alaska Thunderfuck 5000 took the crown. Alaska is undoubtedly a deserving candidate, but I don’t want to talk about that. I know RuPaul isn’t going to read this, it’s not going to change anything, and Alaska is a perfectly suitable choice for the hall of fame. But Katya is everything. Katya deserved this. I want to talk about Katya and her Creativity, Uniqueness, Nerve, and Talent, because Katya has the best damn C.U.N.T. I’ve ever seen.

(Author’s Note: It has been brought to my attention since the publication of this article that it is, in fact, Charisma, Uniqueness, Nerve, and Talent. Katya is a trailblazer so I’m going to follow in her footsteps and leave the section as is. Tweet all snake emojis @kaybeezeey.)

Katya’s insane CREATIVITY goes all the way back to the first moment she ever appeared on Drag Race. Here is that glorious moment:

You’re not imagining things, she’s giving you Red Scare Realness — hammer and sickle and all. This look sums up everything you need to know about Katya as a character — where she’s from, what she’s about, her sense of style, and her sense of humor. In one moment! Her very first moment onscreen!

My personal favorite Katya look from this season (in terms of her creativity) came during an all-latex challenge. When you hear “all-latex” drag show, where does your mind go? Bondage. Really, really sexy bondage. Many queens this challenge delivered that — some went so far as to make latex gowns. Here’s what Katya came up with:

Complete with nose plug! Nobody else could come up with this shit. Not only is this completely out of the box, not only does it work, but it does so at the risk of letting Katya look silly. Katya is so damned creative that she sacrifices her own personal appearance in a TV competition based heavily on appearances to showcase her creativity. We see this throughout Season 7 and All Stars 2, most notably in the John Waters and RuPaul Song Parody challenges. 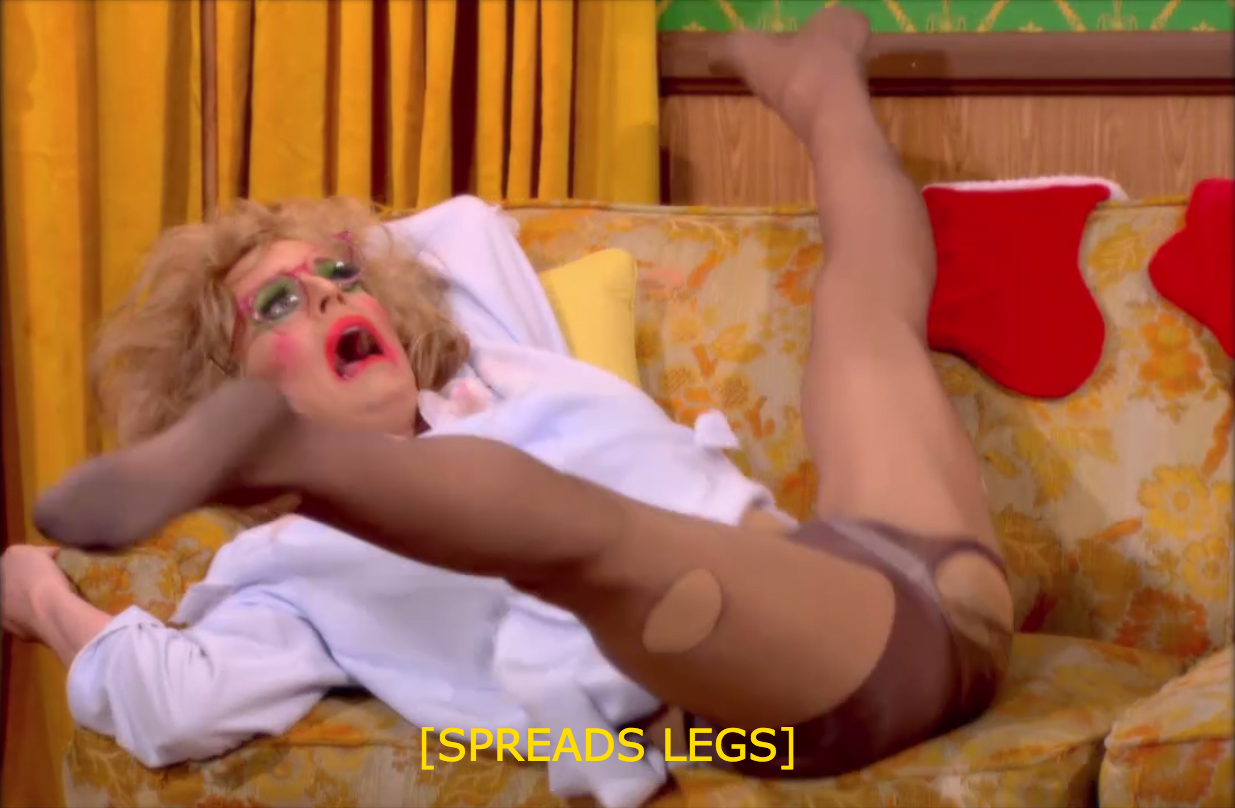 These examples certainly showcase Katya’s UNIQUENESS, but her incredible creativity isn’t what makes her so unique. Fans of Katya know that she’s a cinephile, even if her love of cinema is basically limited to Zemeckis’s 1997 Sci-Fi CONTACT. Still, somewhere in those hundreds of re-watchings, Katya picked up the intricacies of visual storytelling on par with some major filmmakers. Katya’s ability to construct a narrative in an instant is what sets her apart from other queens who stop at constructing beautiful costumes. Katya tells a story even when she doesn’t have to. It brings a sense of thought and intention to her work.

Check out her look from the “Death Becomes Her” challenge in Season 7: 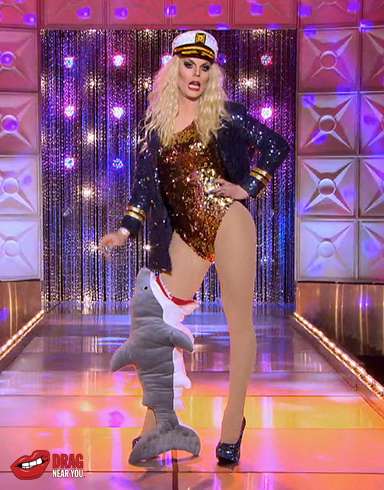 Tell me you don’t see a beginning, middle, and end here. Admittedly many of the other queens in this challenge had “story” type costumes, but Katya’s was not only the clearest but the most unique. (How much gore and corsets can one girl handle? The answer is about five queens worth.)

Katya’s YouTube presence is worth its own article, but I’d be remiss if I didn’t touch on it. Her webseries “UNHhhh,” co-hosted by her best friend and fantastic queen Trixie Mattel, is the obvious standout. (I admit without shame that I’ve seen every episode at least twice — and I would like to argue that it points to how goddamned great it is rather than a symptom of my manic obsession.) In addition, Katya has her own standard recap series for DRAG RACE (“Total RuCall” for All Stars 2 and “RuGRETS” for Season 7), but of course that isn’t enough. Let me draw your attention to “RuFlections,” her series of vlogs loosely tied to her performance on Season 7. I can really only describe these as somewhere between experimental film, beat poetry, and performance art. Just… Like… Look at this shit:

A cinematic eye. A clear vision. It’s obscure but personal, it’s scary but funny… You may ask yourself, “What the fuck am I watching?” You’re watching Katya, and that’s exactly what she wants you to say.

But our girl Katya isn’t just a cinematic visionary. She’s a fantastic comedy queen — and she utilizes her amazing storytelling talent here as well. One challenge in this season of All Stars was to design a product, create a prototype, and shoot a commercial advertising your product. (Sidebar: anybody who doesn’t take this show seriously is wrong — the challenges they put these girls through are unbelievable.) While Alaska also stood out in this particular moment, Katya’s product was the only one that told a story.

… Which segues nicely into Katya’s NERVE. She’s got nerve not only to play an unabashedly crazy character, but to create such a character that embodies aspects of her actual personality that she struggles with. Katya admits openly to having an anxiety-riddled meltdown in Season 7. In an emotional moment in the workroom, Katya pulled Miss Fame aside to open up about her history of addiction and her current struggles with perfection and anxiety.

Now, I’ve watched my fair share of reality TV. I know that everybody and their mother (especially their mother!) has a sob story to raise the stakes. But there’s something about this moment that lent Katya a deep sense of vulnerability. It didn’t feel manufactured — which is saying a lot in a competition essentially about artifice.

Katya is relatable in a way that doesn’t make one go “Oh wow! She’s just like meeeee!” She’s relatable because she feels real. Her journey from anxiety in Season 7 to self-acceptance in All Stars 2 is ugly cry worthy, and if you didn’t ugly cry during her finale speech you’re dead inside. She thanked RuPaul, saying, “In Season 7 you let me show the world I’m good enough, and [on All Stars 2] you let me believe it myself.”

Many of us are fortunate enough to not understand the pain of your parents rejecting you, dying early, or abandoning you at a bus station. Yet, so many of us understand the feeling of never being good enough for anyone — especially ourselves. That is what Katya has to teach us, and what she worked so hard to learn.

And if all of this doesn’t make a case for her unbelievable TALENT, you need to start back up at the top and read it again.

Tonight is the All Stars 2 Reunion, and I anticipate that Katya will be as gracious and hilarious as she has been in the past two weeks. From appearing in Alaska’s victory music video “The T,” to openly threatening to kill anyone who spoke ill of Alaska, she’s been taking her loss markedly better than her passionate fan base. Y’know why? Because Katya isn’t a loser. She won the hearts of millions more fans and — most importantly — won the battle against herself.

So congrats to you, Katya! You’re the best and highest-class whore in Russia. Thank you for giving all of yourself and just being an all-around great and genuine icon. May you frolic on the beach with your dead dad and Jodie Foster, may your packs of cigarettes be full, may your tuck be meaty and your future bright.

It Starts With One Thing: Linkin Park And A Legacy Of Memes