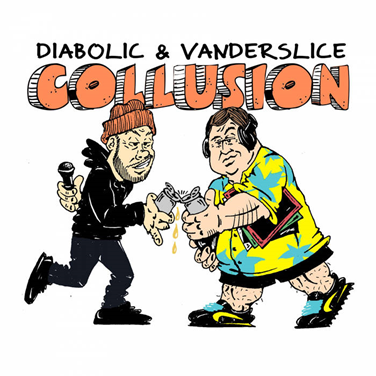 Favorite Tracks: “Think of That,” “Once Again”

On “Think of That,” the first full track on Diabolic’s first album in five years, he drops the following bars:

“I could sit here and list the cats spitting wack shit

So I’m sitting back and thinking what to rhyme about

Off the top like the hair follicles on Talib’s scalp”

It’s a quintessential Diabolic verse, using a pretty clever double entendre to diss Immortal Technique (he was formerly signed to Tech’s Viper Records and appeared on several Tech songs, including the B-Side to the infamous “Dance with the Devil,” before leaving over money issues). “Middle Passage” refers to Tech’s long-delayed fourth album and the horrific naval passage where millions of enslaved Africans were trafficked across the Atlantic, many of whom died and were tossed into the ocean. Again, it’s clever, but it fits into the same problem I’ve had with a lot of the Army of the Pharaohs and Jedi Mind Tricks affiliates: they are clearly literate guys who can rattle off impressive historical, religious, and cultural references, but unlike Lupe Fiasco’s DROGAS WAVE, which built a whole mythology on the Middle Passage, they have no thematic ambition beyond being awesome, calling you a f*****, and airing out their own dirty laundry.

Now we have to get to the other conscious rapper that Diabolic disses in those bars: Talib Kweli. The two exchanged diss tracks, which Diabolic felt offended by what he saw as disparaging comments about white rappers. First off, his hair? Seriously? That’s the best you can do? Second, Diabolic has repeatedly stated his love of old-school hip hop, but the beef made his love seem surface-level, especially when Talib dug up a bunch of Twitter interactions that made it look like Diabolic was an alt-right Trump supporter. Given that he worked with Tech for a decade (and I doubt Tech would have tolerated it), it’s unclear if he’s just an attention-seeking troll or was red-pilled after their split. He even references these rumors on the final lines of the second verse on “Simon Phoenix,” dismissing the idea that he voted for Trump and joking that he only wants Ivanka to give him a blow job. Oh, Diabolic, you possibly alt-right little rascal.

It might seem like I’m reviewing the man more than the music, but that’s only because there’s not much music to review, literally and metaphorically. It’s the shortest of Diabolic’s three albums, and I’m not sure Vanderslice complements him well. Having listened to THE BEST ALBUM MONEY CAN BUY and HOLY SHIT: AN EXPLORATION INTO THE WORLD OF GOSPEL MUSIC, it seems Vanderslice has an affinity for slower, more opulent beats, with a lot of gospel and soul samples. Such production fits for methodical rappers who are trying to tell a story or be more introspective, like Evidence, Blueprint, and especially Freddie Gibbs, but  Diabolic is at his best when he can use his fast flow, and is supported by darker, more streamlined boom-bap. There’s the out-of-place late-90s R&B hook of “Jitterbug,” the textureless flutters of “See the Light,” “Who We Are,” and “Other Side,” all of which are trying to sound dramatic but instead create a sense of ennui that the content does not match, and especially the choppy, heavy piano notes and their two-note progression on “Normalize” that sounds like “Humble” slowed down.

The best beat is easily “Simon Phoenix,” the one that Vanderslice did not produce; its urgent piano melody, more chaotic percussion, and sample-filled hook could have fit right onto LIAR AND A THIEF or FIGHTIN WORDS. It’s also the one time where Diabolic is given a beat that supports his faster flow; at other times he’s forced to slow things down even when the content does not call for it. I still dig his flow a lot, but he rarely deviates from it, with the exception of the off-kilter, panting delivery of “Once Again” that matches the beat pretty well, but his simile-filled punchlines don’t hit with the same impact. Some of them are even repeated from better songs, as he tries to replicate the hilarious image of “demons screaming my lord” on “Living in My Own Head,” or the nasty, CupcakKe-esque “get in them guts like gastric bypass” from “Diabolical Sound,” but can’t recapture their visceral impact. That you have an attention-whorish title that reminds me way too much of Migos’ “Hannah Montana” or Alicia Keys calling a song “Girl on Fire” when HUNGER GAMES was blowing up further cements a disappointing album that was not worth the wait. Separating the art from the artist is not easy, but it’s a lot easier when the art sucks. [Blake Michelle] 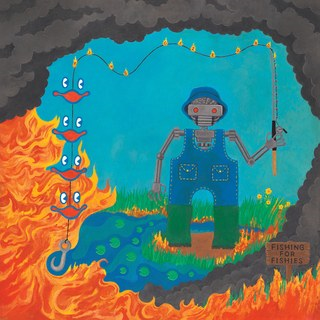 King Gizzard and the Lizard Wizard – FISHING FOR FISHES

Nothing gets me excited quite like a new King Giz record. One of my favorite acts on the entire music scene right now, King Gizzard and the Lizard Wizard are a seven-piece psych rock outfit hailing from Melbourne, Australia whose discography reads as long as many bands decades their senior. Since 2014, a mere five years ago, King Giz have released no less than 10 full-length LPs worth of music, including a staggering five records in 2017 alone, and FISHING FOR FISHIES makes that number 11. Like most of the band’s albums before it, their latest takes a brand new sonic departure for the band heretofore unexplored; having tackled, among other things, doom metal, lounge jazz, math rock, acoustic pop, and every vein of psych rock imaginable, the band now finds themselves taking on a sort of post-disco boogie sound, inspired by any number of late ‘70s and early ‘80s artists. And, like every other genre experimentation they’ve attempted before, Stu Mackenzie and the gang conquer it effortlessly. The album’s opening title track immediately sets a tone, with a polyrhythmic Outback shuffle and some tantalizing harmonica flourishes. A lighthearted and incredibly catchy piece of psych pop, “Fishing For Fishies” also features a Mellotron flute and a playful, psychedelic vibe that evokes recollections of the Beatles’ MAGICAL MYSTERY TOUR. “Boogieman Sam,” a piece of sharp and groovy blues rock reminiscent of a vintage T. Rex, features an absolutely blistering harmonica performance from Ambrose Kenny-Smith, who is easily the MVP of this record and delivers inspired harmonica performances across the whole album, as well as more vocal performances than on previous works..

The highlights don’t stop there: “The Bird Song” is an almost Steely Dan-like jazzy toe-tapper, “Plastic Boogie” is a relentlessly hooky piece of punky swamp boogie, with an eminently chantable refrain of “FUCK ALL OF THAT PLASTIC,” “Real’s Not Real” starts off as the hardest-hitting song of the album before suddenly taking a massive left turn into a bouncy pop groove reminiscent of 10cc’s “The Things We Do For Love,” and “Acarine” is a piece of Eastern-influenced psych rock that recalls sounds from a couple of the band’s 2017 records, with a slick, Tool-like, mathy guitar part and some microtonal tunings to go along with tablas and foreboding synthesizers. This run eventually culminates with a dense acid house-style synthscape before heading into the closer, “Cyboogie,” King Gizzard’s take on the sounds of Kraftwerk and Devo. All told, FISHING FOR FISHIES makes for yet another engaging and quirky listening experience from one of the world’s most prolific and creative groups, and ranks among the upper half of their extensive discography. Any fans of this group or any other kind of psych rock or prog, check this one out. [Jacob Martin] 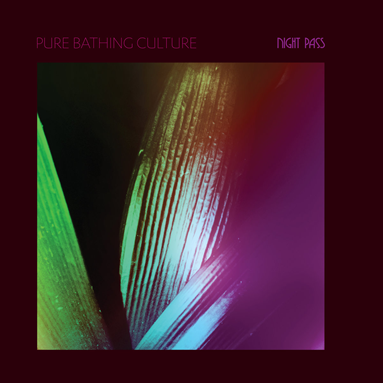 Somehow, someway, Portland, Oregon’s own Pure Bathing Culture have been out there making serviceable indie pop since 2011, a quintessential “they’ve been making music for HOW long?” kind of band. The group’s previous records were always well-crafted, guitar-forward pop records that would have been huge at the turn of the decade had they been signed to Captured Tracks, but for whatever reason, they always existed at a just-below-mid-level indie tier. Their latest album, NIGHT PASS, comes off the heels of them covering all of The Blue Nile’s drifting, late-‘80s cult classic HATS, and that experience has clearly had a profound impact on the group, manifesting in a particular synth and drum sound that the group have flirted with in the past but truly explore here. Make no mistake: this new album is another solid outing from the group, even if the guitars and vocals feel far more schmaltzy this time, a mix of dollar-bin yoga VHS tape directness, Kate Bush’s effervescent freedom as a pop star, all of PURE MOODS I, and, yes, HATS—for the album’s quintessential embrace of this aesthetic, see “Veil.” And while those kinds of vibey choices were always present in their music, a quick runthrough of HATS  will make you realize just how prevalent the vocal performances are now, how much the drum machines and guitar parts bend with a similar quirkiness, and how the actual melodies have a kind of simple, yet odd, MTV-style performative nature to them (like most ‘80s pop did). You can hear it with that upper-lip-biting guitar part on “Remember,” where Sarah Versprille inquires  “Can you believe in make believe? / I want you to believe.” And it’s there in the frazzled clap-along “All Night”—if their contemporaries TOPS are making the velvety and slick version of this style of music, and Mr. Twin Sister tapping into the dancier edges of it, Pure Bathing Culture sought out to make their version of, if not HATS, then SONGS FROM THE BIG CHAIR, with all the over-the-top excess possible, and it works! While I prefer the ever-dissolving lushness of 2013’s MOON TIDES to this, there’s no doubt that this is a fun and interesting direction for the group to pursue (and give this a legit listen after their take on HATS, it makes for an interesting one-two punch). Even if they’ve been around longer than you’re willing to realize, NIGHT PASS is a worthy reminder to give this band’s material another look if you forgot. [CJ Simonson]