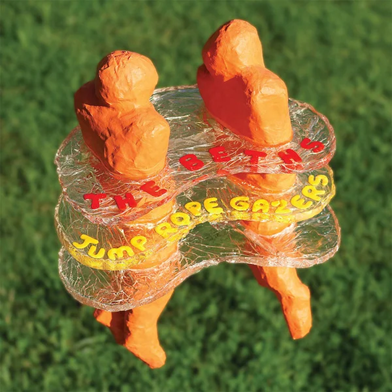 Favorite Tracks: “Dying To Believe,” “Do You Want Me,” “Mars, The God Of War”

The title track of The Beths’ latest, JUMP ROPE GAZERS, is appropriately their slowest track to date, a starry-eyed love ballad that acts as a cipher to the New Zealand punks’ blissed-out, drearier sound. Their sophomore outing unceremoniously strips the infectious zip of their debut, FUTURE ME HATES ME, an immediate jolt of ear-catching punk hooks that was a genuine revelation several years ago. While the results of the band’s latest are decidedly disappointing by comparison, the group cobble together just enough catchy, earnest, heartbreak on one album to chalk the whole release up to growing pains. Things start off exciting enough—even if they’d be dwarfed on nearly any true pop punk cut from their debut, opener ”I’m Not Getting Excited” and punchy lead single “Dying to Believe” are both sonically in line with the furious fun found one album previously, and contain that clever, self-deprecating prose that made FUTURE ME HATES ME such a standout (“I’m sorry for the way that I can’t hold conversations / They’re such a fragile thing to try support the weight of / It’s not that I don’t think that my point of view is valid / It’s just that I can’t stand the sound of my own patterns”). But from there it’s a hazy wash of slower, quieter tracks, mid-album breaks that go on for the duration of the listen. Naturally some of these bemoaned mid-tempo songs are better than others, the best being “Do You Want Me Now,” the vocal performance and chorus one of the band’s most memorable and the hollow, distant crooning leading into the finale a standout and singular moment in their exploration of this summer bummer sonic palette. But frequently songs should either move quicker or with more energy; tracks like the bland “Acrid,” the stringent, bare “Don’t Go Away,” or ho-hum final note “Just Shy Of Sure” could stand to embrace a lot more of the explosive rock nature of their debut, and even highlight “Mars, The God Of War,” easily the best return to form on the album, feels like it’s almost held back a smidge. And it’s not that JUMP ROPE GAZERS is being played safe. While I could easily see that criticism being leveled at it, I simply think the goal was to embrace an energy akin to, say, forlorn ‘90s pop like “Kiss Me” by Sixpence None The Richer, or even a dreamier Michelle Branch, and in doing so the band made an album that feels safe because it abandons any of the life-or-death excitement of going for broke with catchy indie rock single after indie rock single. Even if this was a disappointment, I don’t doubt The Beths will be back eventually. [CJ Simonson] 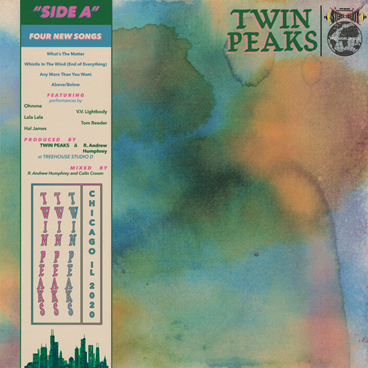 Twin Peaks – SIDE A EP

After a delightful detour into the realm of shag carpets and patchouli-scented incense with last year’s full-length LOOKOUT LOW, 2020 finds Chicago indie rockers Twin Peaks beginning a gradual sashay back towards normalcy, with a little bit of help from some friends from around the city. The SIDE A EP is a brisk four tracks taking up not-quite-20 minutes of runtime, a partial return to previous form for the band that doesn’t quite leave the loose and carefree jam band stylings of their most recent record behind. The third track in particular, “Any More Than You Want,” feels like a LOOKOUT LOW also-ran, albeit a very good one that probably could have slotted onto the album without detracting from it at all. However, the EP’s true focus clearly lies in the band’s efforts to fuse parts of the atmosphere of their last record with a more contemporary sound. The EP’s opener and lead single, “What’s the Matter,” which along with the closer features vocal contributions from fellow Chicago mainstays Ohmme and V.V. Lightbody, maintains a broader ‘70s pastiche with its relaxed pace and decidedly retro flute and organ parts, but also works in some undeniably modern guitar layering. The second track, “Whistle in the Wind (End of Everything),” operates similarly, taking on a more reserved tone while providing plenty of fascinating background color to the main melody, and throws in a fantastically sultry sax part for good measure. Ultimately, though, the first three songs of SIDE A almost feel like a vastly overqualified prelude to the album’s closer, the best and most vivid potential blueprint to be found here for Twin Peaks going forward. “Above/Below” is a more dedicated venture into the realm of psych rock than anything on LOOKOUT LOW, melodically reminiscent of FLOAT ALONG – FILL YOUR LUNGS / I’M IN YOUR MIND FUZZ-era King Gizzard while maintaining a thoroughly unique flair, largely once again through the use of the band’s exceptional guitar layering. The song’s middle passage is a masterclass in musical texture, as the band counterbalances their requisite fuzz and distortion with moments of shining clarity that pierce through the mix gorgeously, all held together by perhaps the most dynamic and cohesive effort of drummer Connor Brodner’s career. In toto, SIDE A seeks to answer any lingering questions about how the band would proceed after their last release, and does so with boldness and aplomb. Both fans and detractors of LOOKOUT LOW will find plenty to enjoy here, as the band seems to already know exactly where they plan to go next. I for one can’t wait to join them there. [Jacob Martin]