Join us for a mid-summer, TV roundup look at the boob tube’s best and brightest, with a special focus on HBO Max! 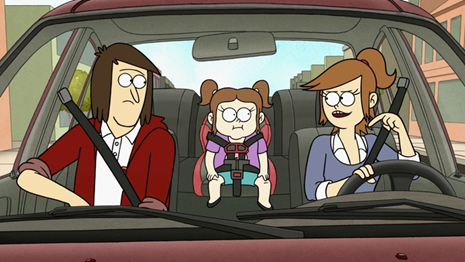 Being a “30-something” is just as frustrating, ridiculous, and occasionally gratifying as the hijinks that accompany your 20s, but now with the large cultural ticking clocks of “starting a family” and “settling down” ticking ever harder and ever louder just above you. CLOSE ENOUGH, a TBS project shuttered and then reborn as an HBO MAX Original rides with that basic premise and fuses it with a surrealism and freight-train-running-off-the-rails mania that allows for high-stakes climaxes and engaging visuals unique to the animated form (to name a few, a VR game about ladders, an open house turned purgatorial sitcom set, and a hipster “hamburglar” company). It’s frequently hilarious, and it makes perfect sense that it grooves as well as it does, because it’s the newest show from animator and star J.G. Quintel, most famous for helming Cartoon Network’s REGULAR SHOW.

Where REGULAR SHOW found humor in the idle lifestyle and menial hourly labor of the late teens and early 20s, CLOSE ENOUGH revels in the odd and frequently lame rituals of being a new parent who still might not see themself as anything other than a large child. It’s a wholly unoriginal sitcom-y space to play in, but because CLOSE ENOUGH carries REGULAR SHOW’s penchant for the over-the-top and fantastical, its silly charm is undeniable. CLOSE ENOUGH takes care to add some interesting modern detail to the proceedings as well. Josh and Emily are the center of the show’s universe and the role parenting their daughter Candice plays in their fluctuating life is the main source of story for the show, but their living situation in a duplex with their divorced friends Alex and Bridgette reflects (at least initially) the difficulty of affording to live in LA on your own terms. The show falters some when examined beyond its strong set of narrative bones. While the zaniness is universally fun, the jokes that are specific to Josh and Emily as characters are a cursory combination of “aging hipster” and “only 80s kids will understand”. These are all inoffensive, but in comparison to the crackling energy of the show’s wilder elements, they don’t hang well. For an unintentional time capsule project from 2017, CLOSE ENOUGH is a fun diversion on a new platform, but if given the chance it’ll be curious to see how the show develops, and how much closer it’s willing to get to animated comedy nirvana. [Ian Campbell] 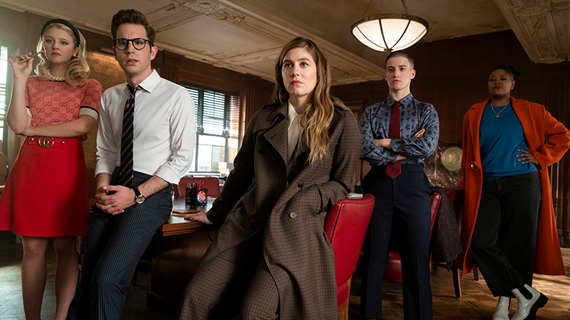 Some shows just weren’t built to last. The first season of THE POLITICIAN excelled within the boundaries of a “high school election parallels real elections” type of show. This second season tried to carry the same vibes over to a New York state senator election that parallels a real election. Throw in Gwyneth Paltrow running for governor/president and you’ve got a paltry satirical endeavor that doesn’t establish a strong point of view and lacks a cohesive ideology.

While occasionally spawning a few salacious group sex scenes, most of this sophomore outing wastes our time with political scrambles that get dropped, never to be heard from again, at a moment’s notice. Why did Standish suddenly lose the adult Geronimo picture of Payton? What happened to everyone in Payton’s family besides Georgina? Where did Georgina’s promise to secede California go? All of the dropped balls combined with a decidedly unlikable protagonist obscure the collection of bright ideas and snappy remarks that compose the script. At seven episodes less than 40 minutes each this might be worth watching just to say you did, but I’m not sure who would be impressed by that. [Dan Blomquist] 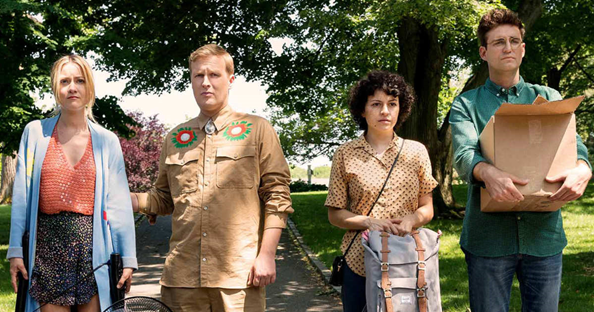 Inadvertent or calculated, one of the most genius things done for Search Party S3, on HBO Max’s part, is to preface it with a commercial for the Golden State Killer documentary. The Golden State killer doc is the kind of court case you hear about by word of mouth and frantically Wikipedia. You comb articles, podcasts, and courtroom water colors, desperate to make your own verdict. While Charles Rogers’ comedy of errors becomes an absurdist web by the third episode, it follows an eerily similar, albeit more humorous, trajectory. Moreover, as surreal as it may seem, it’s notably not crazier than the world we actually live in. We realize the irony of laughing at Cassidy’s Intonation, Getting “Pancaked,” and a Twink Catering Service when in our reality, the President of the United States is telling his citizens to inject themselves with bleach and people are replacing vaccines with essential oil.

In addition to the ads before it, Charles Rogers has been preemptive and wise in making the show from an omniscient perspective. The whole time we as an audience are well aware as to what is happening with our protagonist Dory. We’re aware of the mistakes she’s made, we’re aware of her rationale, everything. Yet, as we bear witness to Dory descending slower and slower into her own sociopathy, we can’t help but be fascinated. We’re disturbingly intrigued by Hannibal Lecter, by the Zodiac Killer, and now by Dory Sief. We’re confused as to why we are, but we can’t help ourselves. Of all the writing this season, nothing has stuck with me more than a simple line. The line is not in Polly’s karmic threats, or Drew’s panicked confusion, not even in our heroine’s plea to go home, rather from Portia. She says, “After this era, it’s my opinion that she [Dory} really resents that she just doesn’t have a sense of self”. In one fell swoop, a line that feels so inconsequential explains one of the most complex character arcs ever written. If it wasn’t abundantly clear in the last two seasons, Charles Rogers and Search Party are fun, riveting, and never to be underestimated.