When it was announced last year that Noah Baumbach would helm the film adaptation of Don DeLillo’s satirical novel White Noise, the reaction from Baumbach fans and critics alike was mostly skeptical. Was he the right person to take on the richly textured novel that has often been called unfilmable? With hindsight, who has been skewering stuffy academics looking down on the rest of us from their northeastern college towns longer and more successfully than Baumbach? Who else has been capturing the minutiae of the inner workings between precocious children and their scholarly parents? So many of his films hinge on being too difficult to watch due to the main characters’ indecisiveness in the face of action and attempts to thwart this through the accumulation and spread of academia.

This crippling fear of death is exactly the crux of WHITE NOISE, so much so that when death knocks at Jack Gladney’s (Adam Driver) front door in the form of an airborne toxic event, his first reaction is to ask what his wife Babette (Greta Gerwig) is preparing for dinner, while his gaggle of children (several from separate marriages) have the appropriate reaction: packing up all their shit and running. WHITE NOISE asks Jack Gladney how, now that death is imminent, will he react? He can’t lecture an airborne toxic event about Hitler’s relationship with his mother until it goes away. At first, he flinches at confronting what is clearly right in front of him. As the media continues to update them on the latest symptoms caused by the event, Jack balks at how to respond. In one of the funniest scenes, in the middle of mayhem, Jack chooses to follow a car with a bumper sticker that reads “Gun Control = Mind Control” because “they seem like they would know how to survive.” Jack’s development, the main thrust of the film, is dependent on his learning how to take charge and overcome his fear of death: to be the man of the family. 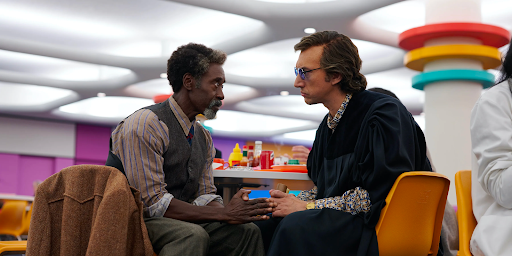 Where Baumbach is most successful in adapting DeLillo’s novel is streamlining Jack’s journey away from his death anxieties and toward optimism in pursuit of logically fitting a cinematic three act structure: the first act is Jack’s fear of death, the second act his confrontation with it, and the third asks what he will do about it. Only when faced with the possibility of losing his beloved Babette, who is also hyper-aware of her own mortality, is Jack able to purposefully put his own life on the line for the sake of someone else, which leads to a surprisingly optimistic ending for a film all about dread.

I’ll be frank: if you are expecting a direct adaptation from page to screen that squeezes in every line of DeLillo’s witty dialogue, and every scathing condemnation of modern consumerist society, you will be disappointed. Baumbach’s film is a separate entity with its own “wants and needs,” as Baumbach stated at the NYFF60 press conference. The film has its own strange flavors, specifically in the name of genre; WHITE NOISE is a quirky family road trip movie one moment, a Spielbergian disaster flick the next, and then, once you think you’ve seen everything, it turns into an Adrian Lyne erotic neo-noir (and, spoiler alert, it ends as a LCD Soundsystem-backed musical). I personally had fun riding Baumbach’s rollercoaster of genre-bending entertainment (although the musical bit at the end was too over the top for me), but I have a sneaking suspicion that it’s exactly that entertainment that turns DeLillo devotees off to the film. The cryptic novel doesn’t elicit the feeling of a popcorn blockbuster, which is what Baumbach has created on Netflix’s dime. In terms of scope, this is the largest and most ambitious project the filmmaker has ever tackled: large crowd scenes and high intensity car chases are not often found in the Baumbach oeuvre—to his credit, most of it was done practically, and looks scores better than the CGI usually fed to us.

“But isn’t all this gawking at scenes of disastrous human suffering from the lush comfort of our living rooms part of what DeLillo was warning us about in the novel?” I can hear you interjecting, wringing your hands, the DeLillo fanatic who has already decided that you will hate the film. Would the WHITE NOISE film adaptation fit into one of Murray’s car crash seminars? Would the Gladney children watch WHITE NOISE open mouthed, empty-eyed as they gaze upon grisly airplane crash footage? It’s possible to embrace the entertainment that WHITE NOISE provides while also acknowledging that it falls short intellectually.