I am very, very upset with Kanye West.

To prove that I have a dog in this fight, let me paint a picture for you: I have severe Bipolar I Disorder, which also happens to come with psychotic features—usually hallucinations and delusions of a paranoid, religious, or paranormal nature. Additionally, I have borderline personality disorder (like Pete Davidson).

I’ve ruined my life more times than I can count; Psych wards are a second home for me, being strapped to a gurney in the ER and having Haldol injected into my quad muscle is basically old hat at this point, and for all intents and purposes, clinically and otherwise, I am a bonafide Crazy Person™ (it’s okay, I can say it).

So let me talk about why I’m angry at Ye.

First, however, in case you missed it, here’s what Kanye did: 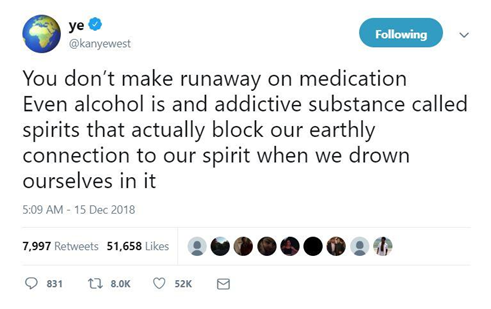 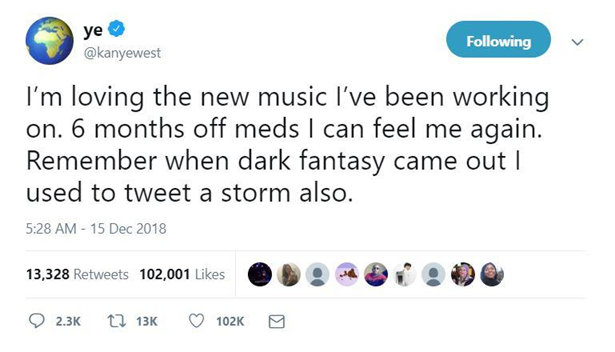 Kanye has a type of Bipolar I Disorder that is more common in men: mania for most of the year (my mania, in contrast, only lasts about four months at a time). He was diagnosed with this earlier in 2018, and subsequently released his album YE talking about it. I remember this vividly because “Yikes” was like an anthem for me:

“That’s my bipolar shit. Ain’t no disability, I’m a superhero.”

That really spoke to me. In a lot of ways, bipolar disorder certainly can be a superpower and mania, at the very least, certainly feels that way. But the very real situation of this illness is that it IS a disability. I can’t tell you how many bipolar support groups I’ve been to that were frequented by people who were on Social Security because they couldn’t work due to the intensity of their illness. There’s no shame in that, of course. I only mention it to show that bipolar disorder is not usually a good time, and the only way to manage it is with medication. I don’t care what anyone says.

“Meds made me feel like shit. I can’t take them.”

No, they’re just no longer manic and unfamiliar with the concept of being stable. Grow up. That attitude is so quintessentially bipolar that it’s a cliché at this point.

I remember hoping after YE was released and he was diagnosed that Kanye would be put on a treatment plan. Through all the “slavery is a choice” bullshit, I knew he was just manic, and I had a lot of empathy. I’ve done some stupid things while manic, things that I won’t get into here because you would think I’m a monster. Even when he went to visit Trump, I figured his doctors just hadn’t found the right dosage for him. “It’s a process,” I thought.

Imagine my dismay when he tweets that he’s been med noncompliant for six months, all in the name of “creativity.”

Denial is certainly a common first phase of being diagnosed with this illness. It was for me. I knew it was some Real Shit, and that accepting it would mean a lifetime of hard work and frustration. Frankly, however, I didn’t really have a choice to reject the diagnosis for very long. I was in the midst of an intense suicidally-depressive episode and I needed medication. My psychiatrist put me on Lithium and Latuda, and I suddenly felt a lot better.

I, too, went through a phase where I thought that meds hampered my creativity. Pretty much everybody with bipolar disorder does; that’s why it’s a cliché.

Realistically, it comes from a place of loving the manic phase of the illness. Mania is amazing—it feels like being a literal god among men. You can do anything. It doesn’t matter what anyone thinks about you because you’re The Best. You might think, “Oh, that’s just narcissism.” Some people mistakenly believe Kanye is a narcissist. Narcissism is a personality disorder characterized by a false facade of grandiose ego created to cope with a devastatingly low sense of self-esteem. Mania is waking up and knowing, without a shadow of a doubt, that you’re a god and nothing can touch you. Naturally, this comes with an intense surge of creativity. When you have nothing to fear, it just kind of flows.

What also comes with mania is psychosis, if it gets severe enough.

One time I became so manic that I thought Los Angeles was literally Hell on Earth, and that Satan ran the entertainment industry like some kind of Soros-Deep State propaganda theory except for Hollywood. It was up to me to work my way to the top and save mankind from evil. Every time I tried to tell someone about this, it seemed to me that the birds outside would start chirping in order to prevent me from spreading the truth, because they were actually Satan’s demon minions in disguise. I couldn’t even go outside for a smoke because, if I left my apartment, the demons would whisk me away and torture me—and the only reason they couldn’t get me inside the apartment was because of my cat, who I believed protected me from evil spirits.

I think Kanye is having religious delusions, too:

Mania is not good, and certainly not something to be glorified. In the midst of it, it all feels so real, and I can’t deny that. But what pisses me off the most is that Kanye’s mania is not just affecting himself, but also the rest of the neurodivergent community as a whole.

My anger comes from a place of deep fear: Fear that the actions of one man can paint the public perception of this widely-misunderstood illness as something even more stigmatized than it already is, and fear that taking medication will be seen as a point of weakness. My dad suddenly loves Kanye because he thinks I shouldn’t be on medication either. Neurotypicals, man.

But my medication has saved my life.

The truth is, I’m more creative now that I’m medicated than I ever was while manic. When you’re manic, every thought is genius, no matter what. Nothing is cohesive, your thoughts race, and there is no filter. Now, my creativity is bolstered by the ability to edit and iterate, see the forest for the trees, and critically examine my own intentions for my work. What’s more, I can create on a steady stream of discipline and focus. No manic person can say the same.

Remember Van Gogh? He is a very famous member of the Bipolar Club (allegedly). Some ignorant people claim that, if he were medicated, we wouldn’t have his beautiful work. Except he WAS medicated (as well as was possible at the time). Remember the Portrait of Dr. Gachet? Dr. Gachet was Van Gogh’s psychiatrist. And you know what he was holding in the painting? A foxglove, which was his medication. It just so happens that a common side effect of ingesting foxglove is a more vivid perception of the color yellow. Fancy that.

And unmedicated people with bipolar disorder die, either from suicide or some other reckless behavior. It’s selfish to say that we, the public, deserve an artist who is unmedicated simply so we can benefit from their art even while they suffer.

It sucks to be manic in the public eye, I get that. But Ye is there; that’s just the reality of the situation. He has a responsibility, not just to himself and his family, but to the neurodivergent community that he claims to represent. I’m just going to say it: if you’re bipolar as a famous person, you have a greater burden of responsibility than those of us who are not. Is it unfair? Sure. But neurodivergent people are vilified and despised, and it’s up to the mentally ill celebrities to be our voice. Kanye West has a platform, and he’s abusing it by being irresponsible.

You only get invited to the mental health discussion table if you actually address your mental health for the better. The day I condone a psychotically-manic person with no self-awareness speaking about my illness will be a cold day in Hell. So, Kanye, it’s time to look at your illness with a critical eye and realize you’re doing harm. Medication saves lives, and to say otherwise is the illness itself speaking. It’s okay to be a “crazy person,” but only if you do your best to manage it. Toxicity is not a good look.

My heart mourns for the regret Kanye will feel when he finally DOES pursue recovery; my own regret haunts me to this day. I can’t imagine it being immortalized in the tabloids. Until he addresses his illness, I won’t be listening to his music. I encourage you to do the same. Supporting a sick person who refuses to admit they’re sick is enabling, and I’ll have no part in it.

To my neurodivergent family: take your meds. 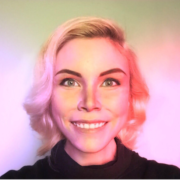 Podcast Pick: WHY WON’T YOU DATE ME?