At first glance it’s a mess of moving pieces. Brown dirt platforms interrupted by spike traps, strange boxes only randomly generated terrain could produce, and a host of squirming insects crawling over indifferent cavemen. Walls with drawings that could (and likely do) denote something, constant motion, and—ever present in the top right corner—a timer counting up to… something. You take all of these things in one at a time. This world is immediately overwhelming and if you’re not familiar with each of its particular qualities, it quickly sends you bouncing to your death, a snapshot of your corpse immortalized in the game’s journal-styled menu. You take a breath and try and parse this strange world together again.

Almost a month since release, I’ve yet to consistently reach the second of SPELUNKY 2’s many worlds. While my slow crawl to the finish line is frustrating in comparison to the progress that the game’s community of streamers, game design experts, and roguelike masters continue to make digging up the game’s many secrets, this is as common to new players of SPELUNKY 2 as it was to players of the original. The experience of playing SPELUNKY 2 can be defined by this kind of failure. While the randomly generated levels skew to some broader trends in the placement of treasure and shops, each run through the game is different, requiring similar but evolving strategies and your full attention to complete. You’ll dodge arrow traps, punching totems, and a host of dangerous creatures all while the ever-present threat of the Ghost that haunts levels arrives to kill you before you can escape. Or you’ll die at the hands of a scorpion that popped out of a jar. 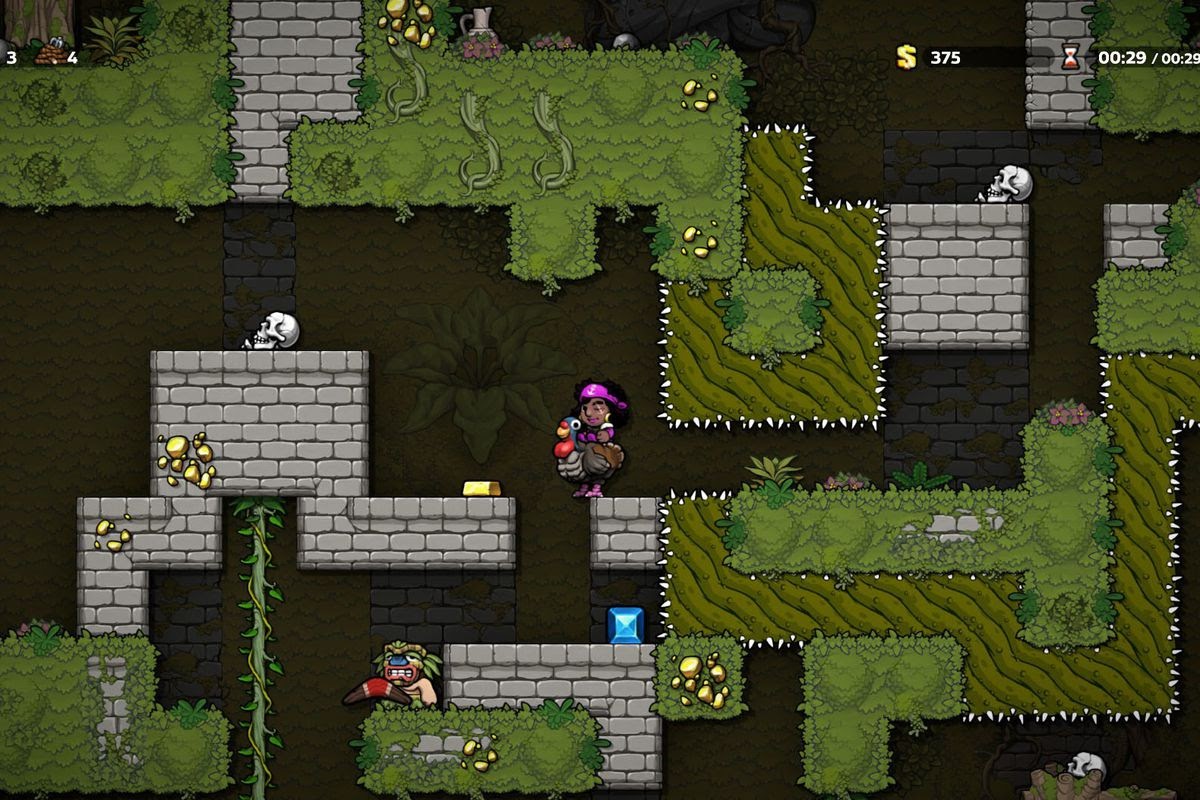 The turkey is the first mount available and the one that points most directly to Yoshi.

This blend of difficult but immensely attractive gameplay “moments” is produced by the game’s level generation, setting up what amounts to mini-narratives on each stage. “This is how I dodged that arrow…”, “This is how I dispatched that horned lizard…”, “This is how I made it all the way to the end with the Ghost Jar, but accidentally threw a bomb instead of a rope.”

Like its parent game, the sequel draws its power from the ease of taking another go, failing in increasingly complex ways and every so often figuring something out that might make you survive a little bit longer, or at least look “cool.” If the elegance of 2D Mario games comes from the handcrafted “you could lay it out on graph paper” quality of each level, the original SPELUNKY favored elegance in its interactions. It’s satisfying to move your character around, fling your whip and toss your bombs, just as much as it is to use Mario’s jump, but the magic comes from when these actions are combined with the very active game world full of creatures, destructible environments, and an occasionally inscrutable set of traps.

SPELUNKY 2 is very deliberately the SUPER MARIO WORLD to SPELUNKY’s SUPER MARIO BROS., most prominently with the inclusion of one Yoshi-esque mount among many, but also in the subtler ways it morphs and polishes the art style, game mechanics, and sound design into a familiar but new object worthy of study. As 2D Mario games have changed they’ve never lost one of their most important features, their legibility: basically the player’s ability to see the level and both infer what’s going to happen AND what they need to do. SPELUNKY 2 is much the same. Each level is randomly generated, yes, but you, the player, are consistent. And in playing the game, you learn how to read.

That “reading” is the skill that SPELUNKY 2 actively encourages, and it crystalizes when you watch anyone else play. Turn on a YouTube video and watch someone run through a level. The slight pauses they’ll make, the use for objects that they may have discovered that you haven’t even realized the intended purpose of yet, even the simple moments when they lean their character down and examine the level below to determine what fresh hell they’ll be dealing with next. These details are the equivalent of a parent reading to you when you were little, seeing lip movements become sounds, become words. SPELUNKY 2 contains the relative order of any English novella, but with the randomness that could only be provided by an AI trained on Mario levels. It really hits you when you try to play again after spending time watching others play—you’ll likely play better than before, and that has everything to do with how your “reading” skills developed by watching someone try to make sense of something that manages to be novel each time they return to it. 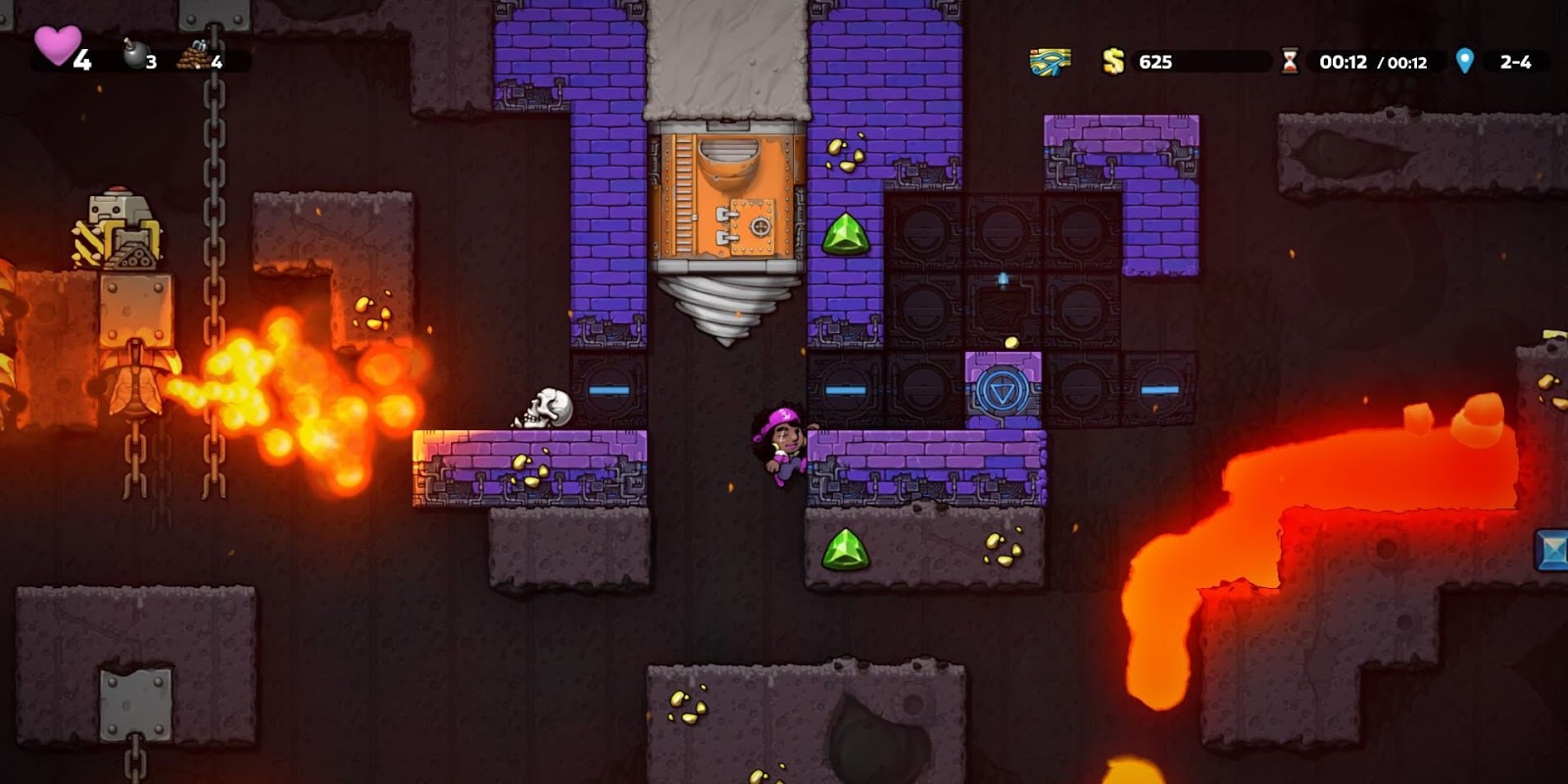 The nightmare of new traps and new liquid physics on full display.

“Growth” and “learning” are even more thoroughly woven into the narrative of SPELUNKY 2. The opening of the game finds The Spelunker of SPELUNKY, alongside his wife, abandoning their daughter and pug to explore caves on the moon. Of course they get lost, leaving behind only a journal of their exploits and the hope that their daughter might be able to fare better and learn from their mistakes. Ana, the Spelunker’s daughter, sets out in a rocket with her dog and establishes a kind of basecamp on the moon filled with playable characters the player rescues throughout their journey through SPELUNKY 2. This space is one of the initial differences between this game and its predecessors: besides shortcuts created over multiple runs, this base camp is one of the only visual changes that occurs in a game that’s mostly focused on changing the player holding the controller rather than the character they manipulate in the game. The moon mission sets Ana on a path following her parents’ footsteps, learning some of the old techniques that were useful in SPELUNKY and adapting to many of the new changes that follow from an environment with lower gravity and new creatures and traps. The player learning how to play and Ana developing many of the skills her parents already cultivated sync nicely, probably the greatest contribution to the realization that SPELUNKY 2 is about teaching the player above all else.

The funny thing about SPELUNKY 2 is that the “educational” aspect of the game was entirely present in its predecessor. In fact SPELUNKY’s release in many ways revived the “roguelike” and “roguelite” genres. No one had stopped making these types of games, but SPELUNKY’s arrival to consoles in 2012 marked a serious reconsideration and resurgence of the design trend, a wave whose crest has brought games like DARK SOULS into the mainstream and inspired countless smaller budget projects to take some or all of the elements that made SPELUNKY popular and put their own spin on them. The realization now that the SPELUNKY series, and in particular, SPELUNKY 2, are operating on a whole other level than just a “Mario-inspired platformer” has arrived late for this reviewer.

In many ways SPELUNKY 2’s debut has been overshadowed by HADES, a game that arrived almost concurrently and offers a similar level of polish and roguelike addictiveness. The fact that SPELUNKY 2 is a refined version of an older game rather than a shiny new thing like HADES is hard to escape, but for a new player playing a game like this is a revelation. All games are acts of love on some level. Somebody and often many people cared deeply enough to slave over a game that someone might enjoy for five hours and never play again. SPELUNKY 2 is nothing over and beyond this care. It’s singular in its construction. Yes, it evokes older games, yes, it plays on now popular trends, but it feels like itself. It’s more SPELUNKY, and a better one at that. In a crowded market and especially for a first-time player, that’s a hard thing to beat and a harder thing to not at least recommend. Few games “read” as delightfully as SPELUNKY 2 and that’s worth celebrating.