This may as well be the slogan of our digital age generation, brought up under constant surveillance, economic collapse, conspiracy theories, and endless corporate greed. THE SCARY OF SIXTY-FIRST, Belarusian-born actress/podcaster Dasha Nekrasova’s directorial debut, was born from the rage that comes out of feeling powerless in the face of this “pedophilic corruption.” After infamous sex trafficker Jeffrey Epstein’s death on August 10th, 2019, Nekrasova held truther meetups in Union Square Park, trying to make sense of his supposed suicide—not because it was a tragedy, but because many people, Nekrasova included, believe Epstein was actually murdered by the elite, essentially silencing Epstein so that he could never spill the beans on their illicit sexual activities. “Epstein didn’t kill himself” has become the “Bush did 9/11” of the early 2020s, signifying a third-eye-opening moment for many people, or just another moment in which conspiracy theories run unchecked, depending on your perspective. Nekrasova’s truther meetups died down, but her adventure down the rabbit hole was far from over; out of this obsession came the script for SIXTY-FIRST, written on the rooftop of an NYC Equinox gym with co-star and IRL friend, Madeline Quinn, first as a short, then a feature.

This image of two girlfriends obsessing over the Epstein case is central to SIXTY-FIRST, as Noelle (Quinn) and a mysterious, unnamed girl (Nekrasova) take lots of Vyvanse in order to spend more time doing “research” (read: scouring the internet for drone footage of Epstein’s private pedophile island). They don’t connect the dots tying red string on a cork board, but they may as well be. In addition to being a film about the Epstein story, SIXTY-FIRST is a deep dive into manipulative, codependent female friendships and unmanageable female sexuality. Noelle and her emotionally needy roommate Addie (Betsey Brown) think they have found a great deal on a swanky Upper East Side apartment, but as they are informed by the mysterious girl, it comes at a bloodcurdling price: the previous tenant was Epstein himself. As Noelle and Addie’s friendship starts to fracture, Noelle grows closer to the girl in their shared paranoia. 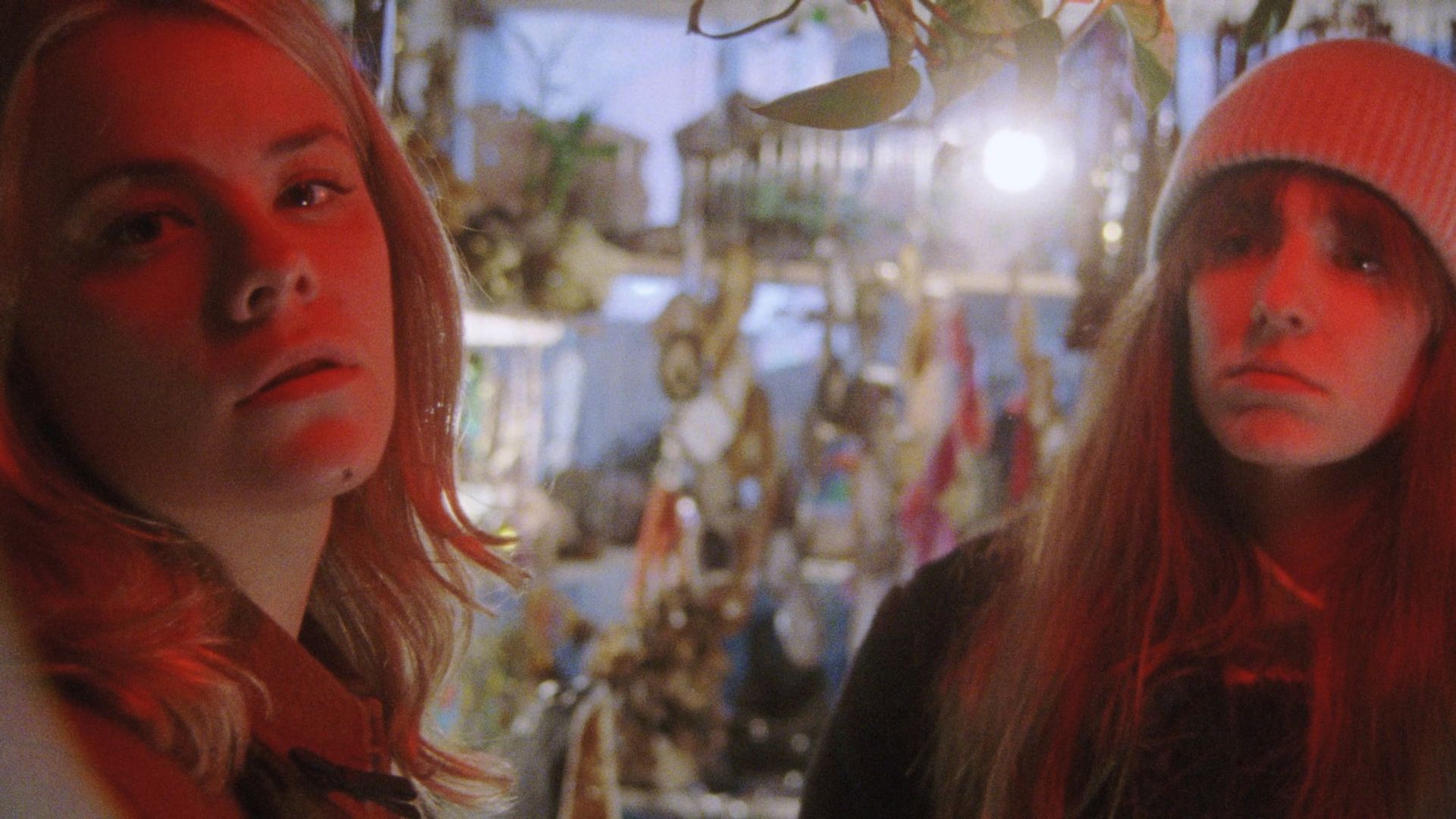 They aren’t detectives or reporters, just girls interested in getting closer to the truth—perhaps too close to the truth. As Nekrasova digs and excavates for verified answers to Epstein’s suspicious death, she creates a work of art so morbidly funny and genuinely chilling that it hits a raw, reflective vein. It is not in spite of SIXTY-FIRST’s absurdist giallo elements, but because of them, that it succeeds. Although the subject matter is horrifying, humor is one of the only tools the powerless masses have to send a middle finger to the capitalist elites; there is an obvious futility in trying to uncover what really happened to Epstein, and Nekrasova is aware of that. Nekrasova gets away with what she gets away with because she makes fun of herself first. The film may be transgressive, but it isn’t provocative for the sake of being provocative; fearful, desperate, and angry, THE SCARY OF SIXTY-FIRST has real feelings behind it.

The film has already garnered early polarizing reviews, but as Red Scare ladies Nekrasova and Anna Khachiyan (who briefly cameos as Epstein associate Ghislaine Maxwell) note on their controversial podcast, “the haters are just fans that don’t know it yet.” THE SCARY OF SIXTY-FIRST may not be for everyone, but it has certainly found its audience on the fringes of polite society, where Nekrasova most flourishes (although I would be remiss not to mention her recent foray into the mainstream with her recurring role on HBO’s SUCCESSION). Whether you believe that Jeffrey Epstein killed himself or think it’s a bunch of nonsense, you have to admit that we all tell ourselves stories to make sense of this scary, crumbling world. The Jeffrey Epstein narrative is a way for the terminally online to “cope” with the nihilism that comes with realizing that bad people with power and money are going to continue getting away with tanking the economy, polluting the environment, and raping children.

THE SCARY OF SIXTY-FIRST isn’t EYES WIDE SHUT for Adderall-addled BPD art hoes, as people who like to string random words together may say. Rather it is a feminine footnote in the legacy of Kubrick’s classic, a love letter to the cornerstone film of conspiracy cinema: a spiritual successor. SIXTY-FIRST is even dedicated to the legendary director, lovingly referred to as “Stan.” Female-led horror films featuring LGBTQ+ thematic elements have been having something of a moment in recent years, with trends such as the re-examination of Kusama’s JENNIFER’S BODY and the Palme d’Or going to Ducournau’s TITANE; I would add Nekrasova’s THE SCARY OF SIXTY-FIRST to that list.