Favorite Tracks: “Nobody,” “Preoccupied,” “Heart To Heart,” “On The Square,” “Baby Bye Bye”

Let’s get one thing straight up front: No one in the greater Los Angeles sprawl gets to call themselves a cowboy. Go Google pictures of Mac DeMarco’s house in Silver Lake. It’s exactly the type of hipster den you’d expect an internationally acclaimed indie rockstar who has soundtracked the shenanigans of a Vans wearing generation of eternal teenagers to dwell in. I was in Silver Lake last night—it’s a really cool, nice neighborhood. But there’s no way in hell that Tom Ketchum was sipping an Aperol Spritz at Tenants Of The Trees before an unsuccessful train-jacking led to his untimely death in Union County, New Mexico. Cowboys are from the dry, beige plains of the American Southwest, not the peaceful, twinkling hills of East Los Angeles.

Mac’s latest album HERE COMES THE COWBOY’s hoof-clopping opening title track is a repetitive attempt at antique country western that provides ample evidence up front that Mac DeMarco is a guy who knows how to commit to a bit. “Choo Choo” is a swaggering attempt at a train robbery soundtrack by a guy who has probably never actually set foot on a locomotive, much less garnered the skills necessary to commandeer one. The most cringeworthy moment of the album, however, comes on “Hey Cowgirl,” a love song where the Tom Petty-like vocals about life on the farm beg us to ignore the fact that Mac’s very public long-term relationship with Kiera McNally started in New York City, not Wyoming or Oklahoma. Mac DeMarco’s “cowgirl” is a micro-influencer, not a rodeo queen, so when he begs to know whether she will “stay on the farm / Or (…) come on back to me,” it feels more than a little cheesy. Don’t get me wrong; I’m sure Kiera and Mac have ridden a horse or two in their day, but it was undoubtedly in more of a “Do it for the ‘Gram” way than out of BROKEBACK MOUNTAIN necessity.

HERE COMES THE COWBOY is actually a great record when DeMarco sets his corny outlaw caricature aside. When he’s sincere and makes music that sounds like himself, his latest work proves that time and experience have only ameliorated DeMarco’s chops as a songwriter and producer. “Nobody” is a melancholy song that palpably comes from the heart, and his increased employment of acoustic guitars sounds much more sophisticated and natural than it did on 2017’s mediocre THIS OLD DOG. The same can be said for the excellent, piano-driven “On The Square,” where the minor-key melody and baritone crooning evoke a lonely sunset over the bustling stillness of the Southern California straggle. Although the lines “Open your mind / Fill it with bullshit” will resonate more deeply with DeMarco’s 17-year-old fans than with emotionally developed adults, “Preoccupied” may actually be the best Mac song to date, musically speaking. A gorgeous electric guitar lead uses cascading chords to craft the indie rock version of a Wes Montgomery lick, while cross-stick snare drums and laid-back acoustic guitars craft the perfect mise-en-scène for a moody midnight solo drive. The track is a reminder that even though HERE COMES THE COWBOY may have the authenticity of a college student’s wild west Halloween costume, Mac is cool enough to have dropped an awesome cover of Japanese robo-jazz icon Haruomi Hosono’s “Honey Moon” less than a year prior. When Mac showcases the profound self his fans grew to love him for, HERE COMES THE COWBOY reveals that he is wise and talented beyond his young age of 29.

Ultimately, though, the appropriation of Western culture on HERE COMES THE COWBOY is both distracting and lazy. Writing from the perspective of a character has the potential to be really cool; Mac’s latest is too much a scatterbrained amalgamation of autobiography and STAGECOACH-esque western. Listening to HERE COMES THE COWBOY is like randomly splicing together a VHS home movie from your childhood with your grandfather’s old copy of 3:10 TO YUMA and then resigning to mediocre confusion as you watch the playback. You never know if you’re going to get a gunfight outside of a saloon or a hyper-sincere look into Mac DeMarco’s most personal self.

Confusing narrative aside, Mac DeMarco is one of the most respectable indie rock icons of his generation. His lovable persona and relaxed crooning have set him up to be remembered as the Harry Nilsson of his generation, and while HERE COMES THE COWBOY may not be his NILSSON SCHMILSSON, it is better than the album before it. Age suits him well and if he can get back in touch with the bleak smokiness of his Canadian roots, I have all the faith in the world that Mac’s next record will be his most haunting and mature yet. 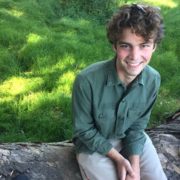 And Now Our Watch Begins: TV Shows That Fill the Void