The TV landscape has changed significantly since Jaime pushed Bran Stark out a window in 2011. Netflix’s first original series HOUSE OF CARDS wouldn’t bow for two more years, BREAKING BAD was in its fourth season, and LOUIE topped most “best of” lists. Most of us were still watching TV as God intended: fast-forwarding through commercials on your DVR, then fast rewinding when you accidentally go too far, then overshooting and begrudgingly watching 20 seconds of a commercial anyway because you’re too lazy to fast-forward again.

No matter your feelings on how GAME OF THRONES wrapped up, we can all agree that the 90+ hour journey that was D&D’s Murderkill Softcore Dragon Hour left us a little fried and wondering what’s coming next. It’s unclear if there will ever be a zeitgeist TV show of its ilk again, but rest assured there are plenty of amazing programs at our fingertips to scratch that greyscale itch—maybe even a little better than THRONES did. 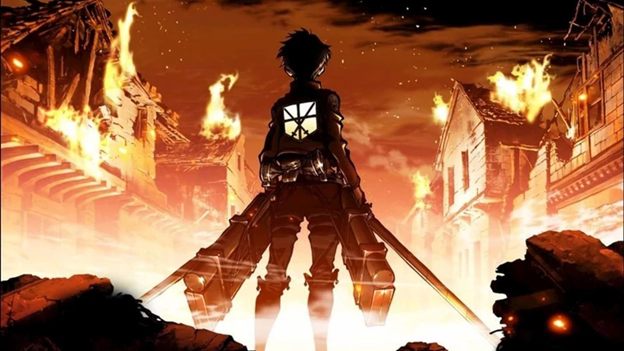 When describing this anime to prospective viewers, I’ve often called it the GAME OF THRONES of Japanese animation. It’s bloody, gory, at times absolutely disturbing, and it will not hesitate to annihilate the characters you love.

Set in a nebulous time period where soldiers can basically fly, cannibalistic giants roam the earth, and the fireproofing is absolutely medieval, ATTACK ON TITAN follows an orphaned teenage boy and the ragtag resistance as they struggle to fight back against the mysterious and lethal Titans.

Full of surprises, twists, and turns, ATTACK ON TITAN is an engaging, high-octane action anime. The animation is goddamn sexy, the fights are gripping, and there’s actually a power struggle (game) for the throne of the kingdom. I just hope the ending is more compelling than HBO’s concoction. [Tracy Nicoletti]

For historical drama with lots of juicy embellishment: 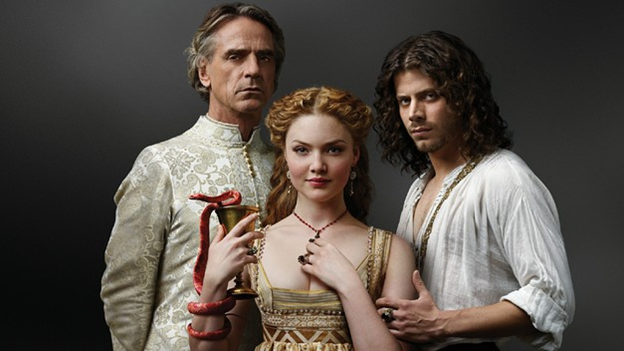 As fond as we all were of the ice zombies and fire-breathing dragons, I think anyone would be hard-pressed to claim they were the real drawing point of GAME OF THRONES. No, that prestige belongs to the brutality, the drama, and the juicy political machinations that (believe it or not) are pulled straight from real events in the 15th century.

Historical dramas have always been a font of entertainment for how ridiculous or embellished they tend to portray real-life events. I’m talking VIKINGS, SPARTACUS, and THE TUDORS. But, what if I told you one of these shows was not only set in the same time frame as GAME OF THRONES, but also follows a family whose actual documented history is just as violent, as power-hungry, and as incestuous as the Lannisters? Enter Showtime’s THE BORGIAS: a program centered on the exploits of Pope Alexander VI, his family, and all the batshit insanity they wrought to seize control of the Catholic Church. It’s a tight show that sadly was cut loose after a solid three-season run, but nonetheless delivers a rich, layered exploration of Renaissance-Era debauchery and conspiracy many will be pining for in GoT’s absence. Plus, it’s got Jeremy Irons as a megalomaniacal pope, so that in of itself makes it worth a watch. [Jon Farah]

For edge-of-your-seat drama and stellar writing: 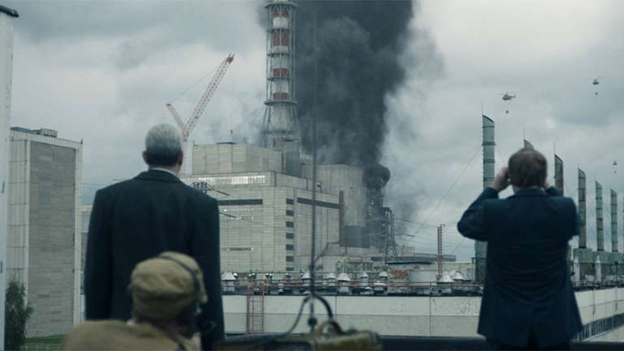 The second I clocked out of Westeros on Sunday, I immediately hopped on the bus to Pripyat. I do not recommend this as it is still terribly irradiated to this day by the infamous Chernobyl disaster, but I cannot give a high enough recommendation to Craig Mazin’s historical opus CHERNOBYL.

I watched my first episode of CHERNOBYL after the penultimate episode of GOT’s last season, and was immediately drawn in by the utter craftsmanship of this series. The extreme attention to historical detail, the elegant storytelling, the pit-of-your-stomach suspense… Even the smallest criticisms I had were addressed in full on the companion podcast, which I also highly recommend as an antidote to DND’s hair-pullingly infuriating “inside the episode” interviews.

Watching the miniseries was an ah-ha moment for me. It’s easy to get caught up in the Twitter rage and lose faith in TV as a medium when our flagship shows let us down. CHERNOBYL reminded me what it’s like to be truly invested in a story, to feel how our characters feel, and to be so stricken with dread that I had to watch no fewer than two hours of Food YouTube before I was able to go to bed. It’s as harrowing as it is expertly done, marrying solid story and historical accuracy with poignant themes of truth, lies, and political allegiances coming into conflict with moral beliefs. (Y’know—like another show we know.) It’s HBO’s strongest argument yet for why we should keep our subscriptions, and with only a five episode commitment, at the very least you won’t be wondering where your 90+ hours have gone. [Kate Brogden] 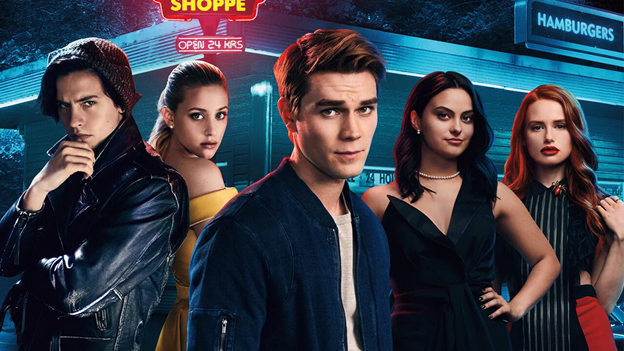 Welcome to RIVERDALE, an Americana dream on the surface, but a noir nightmare beneath the bubble gum, milkshakes, and teenage angst. If pettiness, backstabbing, sass, and sex were your favorite parts of GOT, then this CW staple is for you.

Murder and mystery pulled me in, but, if I’m being honest, I don’t keep watching the show for the plot. I keep coming back each week for my dose of Bughead—Betty and Jughead’s infectiously sappy relationship. Love me some Cole Sprouse. [Tracy Nicoletti]

For epic lore bombs, obsessive foreshadowing, and gender positivity (for a change): 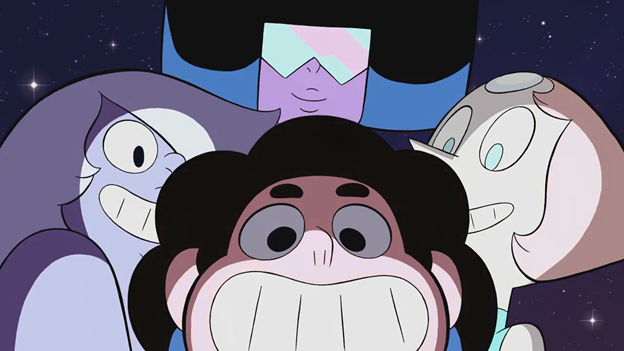 Don’t be fooled by the pastel-colored animated exterior: STEVEN UNIVERSE doesn’t treat its viewers like children. Whenever D&D assured us that every bizarre character choice was “foreshadowed,” STEVEN UNIVERSE fans just had to laugh. A recent endgame-level reveal in SU prompted many fans to revisit earlier episodes, only to discover foreshadowing as early as the pilot. Creator Rebecca Sugar admitted to wondering if it was too obvious at the time, but almost nobody caught it. The levels of foreshadowing are so intense that it’s practically an in-joke in the fandom—but it’s more than a gimmick. It points to a well-crafted story and storytellers building trust with their audience.

If you’re the type who likes to get down and dirty in Reddit theories, look no further. The series’ penchant for foreshadowing leads to the kind of frame-by-frame analysis previously reserved for GRAVITY FALLS. For you GOT book heads, the lore of STEVEN UNIVERSE is detailed and intense—the in-show history goes back over 5,000 years, and all of it is vitally important to understanding the events of the show. Characters are flawed and complicated. For my fellow Jamie/Brienne stans—if you want a tragic, star-crossed romance for the ages, look no further than Pearl and Rose. (And yes—it pays off.)

Oh yeah, and did I mention STEVEN UNIVERSE is gayer than Renly and Loras on night out in WeHo? All this is to say, take everything you love about GAME OF THRONES but shorten the runtime by two full days and make it unabashedly gender inclusive. Slam dunk. [Kate Brogden] 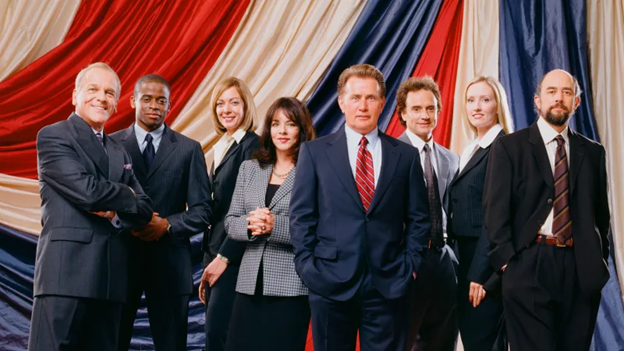 A lot of folks, myself included, didn’t necessarily come to GAME OF THRONES for the action sequences or the gore. We watched GAME OF THRONES for its dissection of power, use of diplomacy and alliances (or lack thereof in so many cases), and the political chess moves that were made to sustain power in the fight to keep order in the land. But you know what other show does this? THE WEST WING.

You may be thinking… what? The White House doesn’t have DRAGONS! But hear me out. This early 2000s serial political drama features many of the same tenants that left people crazy about THRONES: strong female characters (Allison Janney as C.J. Cregg is still one of my favorite women in television to date), witty dialogue delivered by characters that we watch develop over time, moments of comedic relief even around sensitive and serious subject matter, and an inside look into the difficult power moves that people make in order to keep stability and authority. Although set in a more realistic backdrop that may hit too close to home given our tumultuous real-life political climate right now, it puts viewers in a position to really understand all the moving parts that keeps a governing body together. I even jokingly called the last 30 minutes of the GAME OF THRONES finale “The Westeros Wing” while it was airing.

The West Wing and the exploration of Washington politics is in its own strange way an interesting alternative to kings and palaces. Instead of the Iron Throne, we have the Oval Office. And instead of dragons we have… congress? At any rate, get some Sorkin in your life and watch it all on Netflix. [Lauren Chouinard]

A COWBOY Mac DeMarco Is Not