Did someone murder the studio comedy or did it kill itself? I know I’m supposed to mourn the bygone days of mid-budget, star-led farces (or as is the case with COVID-19, the death of theatrically released comedies, period), but the output of the past decade has forced me to see this as a consequence brought upon by the dearly departed themself. Like so many of its lackluster 2010s compatriots, AN AMERICAN PICKLE, an HBO MAX high-concept fantasy about an early 1900s Jewish pickler (Herschel, played by Seth Rogen) falling into a brining vat and getting unearthed in 2019, where he is taken in by his great grandson (also played by Seth Rogen), is a car with no wheels. It looks like a comedy, it smells like a comedy, and it has the mouthfeel of a comedy, but oh brother, where is the comedy? Screenwriter Simon Rich and director Brandon Trost are riffing on a COMING TO AMERICA-type beat, but in the self-serving pursuit of modifying the ‘80s debauchery to mute the sharper, “cancellable” aspects, they’ve accidentally flipped the switch on the gags that made Eddie Murphy’s New York odyssey a side-splitting, challenging barn-burner. 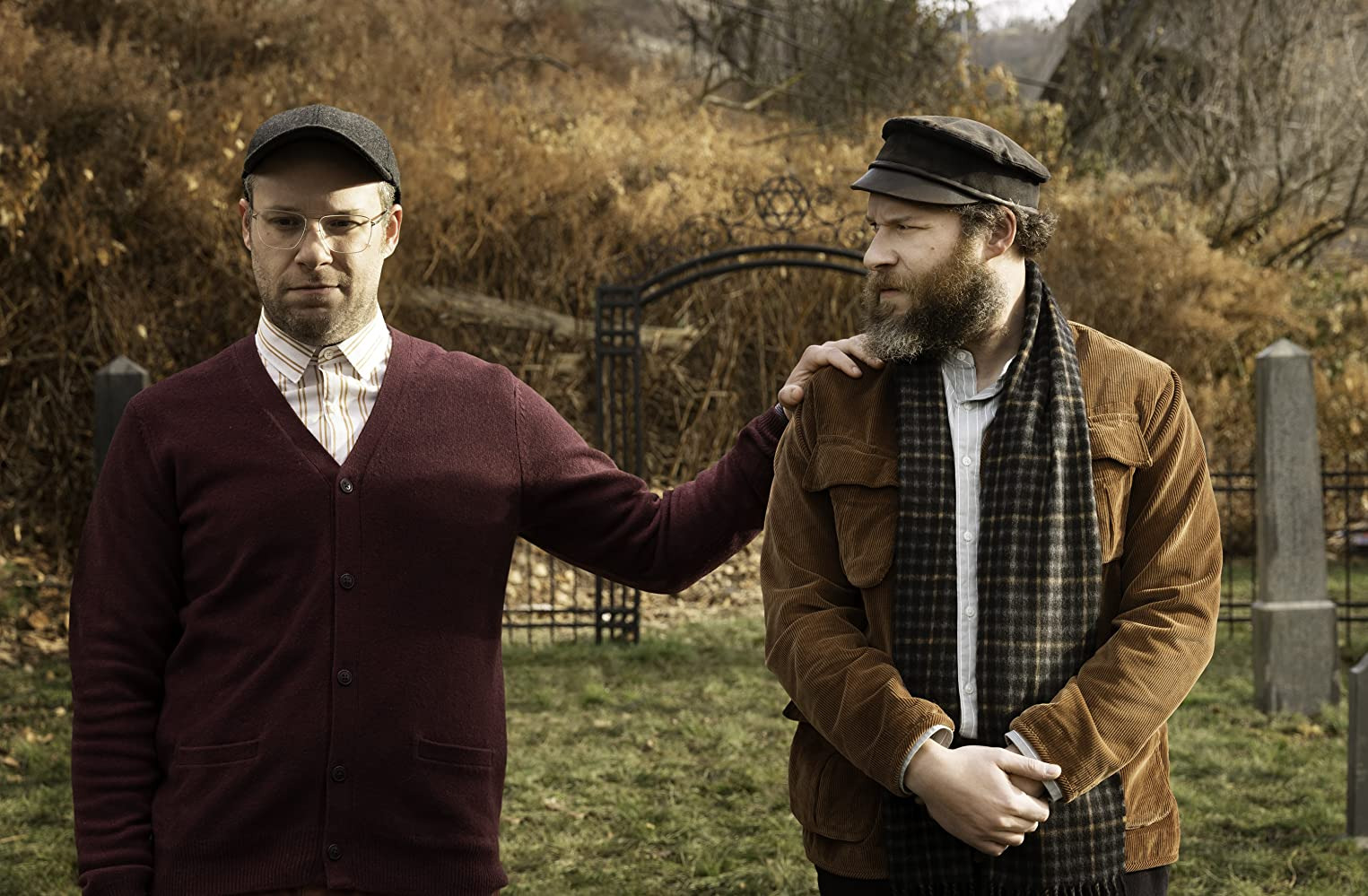 Two Rogens, but zero weed—what in the world is happening?

It’s a fun idea to workshop in a college screenwriting course, a concept that makes a really funny, improvised scenario at a UCB show, but ultimately one that serves as a stepping stone to a larger, one could say “finished” idea. Sure, a large part of AN AMERICAN PICKLE’s joke is that it’s so clearly a first-suggestion, goofball pitch. Call me demanding, but Seth Rogen fist-fighting a misidentified Russian-Cossack utility crew mounting a vodka billboard outside an Ashkenazi Jewish cemetery should feel a lot more insane than AN AMERICAN PICKLE makes the brawl out to be. Herschel’s quest to purchase the burial ground of his descendants he never met provides the film’s most endearing arc, wherein an entrepreneur adjusted to unregulated commerce must contend with the American myth of a free market. Herschel becomes Brooklyn’s latest viral superstar, a la Radioman, selling rainwater-brined pickles made from supermarket dumpster produce. In this set-up alone, let’s just list out the sheer number of topics at play: we’ve got the centuries-long feud between Jews and Cossacks, New York’s cruel city planning that plows over sacred grounds, marketable cultural symbolism, the anglicization of America’s immigrant Jews, the aforementioned market misnomers of the United States, the othering of Brooklyn’s natives by its gentrifiers, and the capitalist ethics of reallocating food waste. I think I may have missed a few, too. AN AMERICAN PICKLE serendipitously arrives at a time of an actual quarantine-inspired DIY-pickling trend (all the film’s missing to be even more en vogue is a sub-plot where two Seth Rogens sneak into a bakery to steal essential sourdough starter), but its timely commentary starts and stops there.

I predict that a lot of people have been kind to AN AMERICAN PICKLE because of the creators involved: Seth Rogen is a lovable, brashly outspoken ball of kush and it’s often a good idea to stay on Simon Rich’s good side if you’re even remotely active in comedy. Luckily for us at Merry-Go-Round, Seth could give literally two shits about what we say and, if we have AN AMERICAN PICKLE to judge by, then Simon Rich is clearly never on Twitter or generally in tune with post-2013 cultural dynamics to have us on even one of his friend’s radars. Trump-era analogues abound, but the tame satire never exceeds the bite of an Obama-era THE DAILY SHOW sketch. Rich screams to me the type of guy who opted for the chilly, safe confines of his apartment before it was cool to stay indoors for months on end. His vision of America reminded me of Brady Corbet’s infinitely more obnoxious, but intellectually similar VOX LUX, a movie that also screams “I’ve read a lot of articles about this.” It’s not outrageous, it’s just kind of dumb and motionless—80 minutes isn’t a long time to invest for some sub-par entertainment, sure, but it feels like 80 minutes of waiting in the bank parking lot for your mom. It was a Thursday night of wanting to find something to watch, and AN AMERICAN PICKLE was, surprise, available for free in my home, and yet somehow I was still disappointed by it. Had it kicked into gear even once, perhaps dropping the Hannah Gadsby pretense of hinging on Ted Talk pleasantries rather than the actual construction of jokes for a movie about a human being pickled for 100 years, then maybe, just maybe I would’ve chuckled more than just that time in the first 15 minutes where I whispered to myself “Austin Powers: International Mensch of Mystery.” 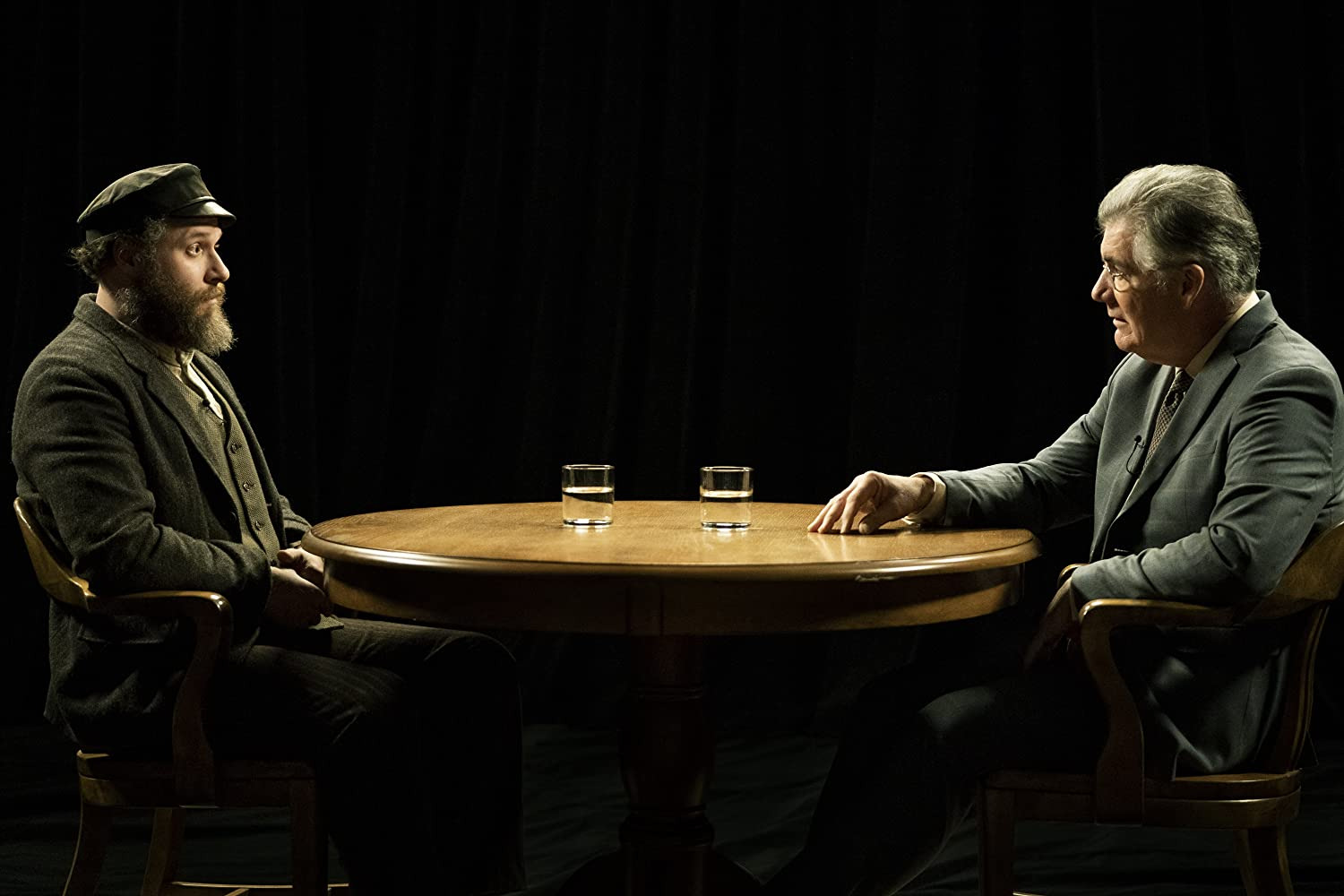 There’s certainly something to be said about a comedy with “something on its mind,” but it’s difficult to grant even faint praise when that “something” is “everything I ever read as a headline in The New Yorker.” I’ll give Simon Rich the benefit of a doubt—it is exceedingly difficult to summarize modern humanity’s impact in a comedic state of the union. If someone were to teleport to 2020 from the early 1900s, what would you tell them first? What wouldn’t you tell them? Like an in-class essay, AN AMERICAN PICKLE concedes that the best way to pass is by cramming in every idea from the course through nominal mentions in broken paragraphs, desperately seeking mercy from the professor by blindly dropping as many key terms as possible. I’ve written AN AMERICAN PICKLE many times, and even managed to graduate with the shared excuse of “Oh, professor, the essay I turned in is messy because I was purposefully embodying the messiness of American culture.” It still resulted in a transcript record of straight C-minuses.

DESTROY ALL HUMANS! Brings Dumb, Campy Mayhem Back to the Mainstream