Spending time with children that aren’t your own has an undeniably unique impact on the adult psyche. Kids pick at the questions you avoid asking yourself (“why aren’t you married?”), they unknowingly point out your hypocrisies, and they don’t yet have the tools to deal with their emotions, so they lash out. But at the same time, you can’t help but be charmed by their hopeful nature. I’m a total sucker for films that explore this ever-shifting dynamic, but even if the premise of Mike Mills’ latest film C’MON C’MON felt made for me, I left the theater unsatisfied by the film’s disorganized detour into a podcast episode that ultimately leads nowhere.

C’MON C’MON follows Johnny (Joaquin Phoenix), an Ira Glass type podcaster who travels the country, interviewing kids about the future. He must step up when, on the anniversary of their mother’s death, his sister Viv (Gaby Hoffman) needs someone to take care of her eccentric nine-year-old Jesse (Woody Norman) while she deals with her estranged husband’s bipolar episode. Although Johnny and Viv weren’t previously on speaking terms due to a family spat that isn’t given nearly enough screen time, they’re pushed to patch things up for Jesse’s sake.

The most insightful moments are found in the funny, intimate, sometimes heartbreaking interactions between uncle and nephew as they teach each other new ways to hear the world around them, both literally and figuratively. Johnny teaches Jesse to listen to the sounds of Los Angeles beaches and NYC skaters through audio equipment, and, in turn, Johnny learns to be more vulnerable with his zany charge. Jesse is unapologetically precocious, the kind of kid who mostly hangs out with adults, and it’s a testament to Norman’s astute acting skills that Jesse is an intuitive character instead of a flat, annoying one. Phoenix and Norman’s undeniable chemistry is reminiscent of that of Rüdiger Vogler and Yella Rottländer in Wim Wenders’ ALICE IN THE CITIES, also shot in black and white; stuck together by less than desirable circumstances, growing more vulnerable with each other by choice, and impossible not to fall in love with. Vogler’s character Philip Winter sees the world through his Polaroid camera, as Johnny hears the world through his audio equipment, but both men have both lost their way, and need a friend to remind them of that little thread of hope still gently holding everything together, while poking fun at them at the same time. One can almost hear Alice tsk tsk-ing Philip about spending too much time on his phone. 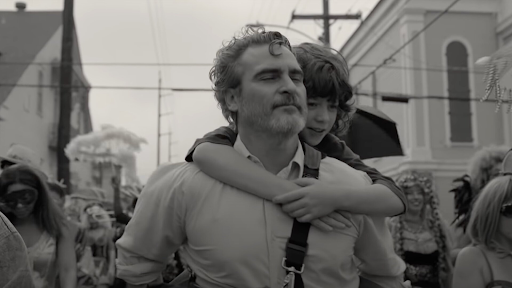 To the film’s detriment, there are far too many interviews with children awkwardly jammed into the narrative thread of C’MON C’MON, interrupting the emotional flow so tenderly crafted by the delicate performances. Episodes of THIS AMERICAN LIFE have overarching narrative themes for each episode; disappointingly, the theme of Johnny’s radio show doesn’t go much further than “we’re interviewing American kids about the future,” which isn’t a complex enough idea to sustain an engaging podcast episode, let alone a feature film. Director Mike Mills and cinematographer Robbie Ryan have created strong enough imagery to communicate the inner lives of their characters to audiences. Verbally explaining those feelings through the interviews completely undermines those feelings.

I would consider myself an advocate for more podcaster representation in cinema, as mixing film and radio can be effective when integrated seamlessly into the story. In Oliver Stone’s TALK RADIO, Eric Bogosian’s self-hating shock jock Barry Champlain receives increasingly threatening hate mail as his on-air spewings become more and more controversial in an attempt to take his show to the national level. Barry’s radio show is central to his character and to the conflict of TALK RADIO overall, whereas Johnny’s job presents very few opportunities for development considering the high volume of screen time it eats up—Johnny has great relationships with his co workers (Molly Webster and Jaboukie Young-White), he is given plenty of leeway when it comes to taking care of Jesse, and there is no conflict with any of the kids being interviewed for his show. There is plenty of conflict to explore between the family members of C’MON C’MON, so Mills’ choice to devote so much time to radio journalism is disheartening. Whether he is capturing the growing pains of adolescence, the joy of new love, or the grief of losing a parent, Mills does so in a way that feels true instead of saccharine. Life’s little moments, in all their blissful humor and bittersweet melancholy, have become Mills’ bread and butter for a reason.