I did not want to see THE SOCIAL NETWORK when it was released in 2010.

I found the trailer pretentious and the proximity of its release to the events of the film (2003-2005ish) tacky, so I made no effort to see it in theaters, but I was a little 17-year-old completionist, so I ended up watching it the holiest way to watch a movie: in preparation for the Oscars, on a DVD rented from Blockbuster, with my mom.

I thought it was fine. I thought that Andrew Garfield was very hot (it was 2011), so the following morning I watched it again with commentary (I had to hear his British accent), and after the inside jokes between Garfield and Armie Hammer, the magnitude of the piece hit me.

Here’s the thing about THE SOCIAL NETWORK: it’s the greatest film I’ve ever seen in my entire life.

As I repeat this phrase, it feels more and more hyperbolic but, at a certain point, we must qualify SOMETHING as such. It feels like there is a building fire burning just off screen of every scene of the film, a quality that makes every fight with Eduardo, and every sideways glance between Winklevii, feel that much more dire. That’s the game. Every facet of this film is absolutely dire. It’s the most intricate, personal implosion on a massive, public scale, and it’s the oldest story ever told: love, friendship, deception, betrayal, all in a world that’s changing faster than any of us could have imagined, especially in 2010. And in every scene, Fincher is a modern Homer, waving you over to join him next to the fire as he tells tales of the gods.

Film has always felt like a kind of religion to me—as the first medium of art I fully connected with, it was a means to communicate with something greater than myself, a guidebook to concepts and feelings I couldn’t quite grasp yet. What I soon discovered in watching THE SOCIAL NETWORK was a more graceful connection with others; an opportunity to learn about oneself through those who share your faith. After my viewings, and after watching it win Best Picture at the Golden Globes that night, I sought community. I logged onto Tumblr.com (again, it was 2011) and I found exactly that: hundreds of girls my age, desperate to discuss David Fincher’s THE SOCIAL NETWORK.

I’ve spent years trying to figure out why a film from the director of SE7EN and writer of THE WEST WING about the creation of Facebook resonated so strongly with a sect of teenage girls at the turn of the decade. The obvious answer is the cast—I mean this movie introduced the world to Andrew Garfied AND Armie Hammer, plus the press tour and awards circuit were chaotic and unnervingly charming. So, I’ll be honest, that’s probably part of it. I’d say the majority of girls I know who are obsessed with THE SOCIAL NETWORK are queer; maybe we connected with the deeply toxic, lowkey sapphic, obsessed-with-your-best-friend trope that the film is built upon. Did David Fincher know he was making queer cinema? In the commentary track, Andrew Garfield recounts shooting a scene between Mark and Eduardo on the phone, with Jesse Eisenberg off-camera: “He kept on giving me these wonderful little ad-libs for me to react to… I think at one point I made him say: ‘I love you, you’re my best friend. Come, and we’ll get married, and we’ll live in a house together.’ Just to kind of like give me that right kind of reaction.” Clearly the notion was discussed.

Everyone I follow who was a major THE SOCIAL NETWORK fan account still posts about THE SOCIAL NETWORK, just take a quick scroll through the Letterboxd reviews. Frankly, I think it losing Best Picture to TH* K*NG’S SP**CH may have solidified it as a kind of cult classic in a way. THE SOCIAL NETWORK is my favorite film of all time, it has been since I was 17 and somehow my love for it only grows as it continues to become more and more relevant with the dissolution of our democracy, and all that, but to misquote James Kennedy, it’s not about The Facebook. My undying love for THE SOCIAL NETWORK and the reason it feels like a cult classic is because of the (admittedly unhinged) community built around it. We have studied the text, we have memorized the scripture, and we put David Fincher quotes on our grad caps (maybe that was just me). I think a lot of us learned about filmmaking, writing, and criticism during that time—not only was it an accessible entrypoint as a Great Film™️, we were learning outside of the average, incredibly white/male-dominated establishment. It was exhilarating to bypass that inherent judgment and to simply learn together via a film we all loved. 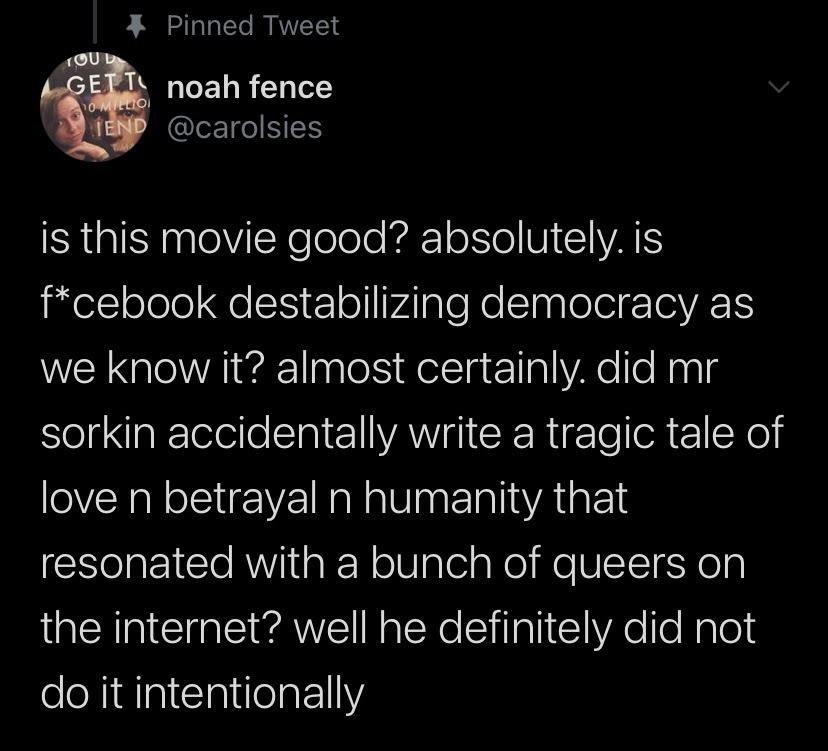 In April 2019, I went to a rep screening at The Aero. I’m so used to rep screenings in LA, full of sweaty dudes who stand up during the Q&A and ask filmmakers what their favorite GTA game was (a real question asked of Edgar Wright at a BABY DRIVER showing) or to proudly declare “This is more of a comment…” But the energy at the Aero that night was different: the audience was full of girls and gays, everyone whispering the lines as they happened. It was a dream: I got to sit in a quiet, dark room with people who shared my reverence for the film. I felt 17 again, under blankets in my room scrolling endlessly; reading scripts, essays, reviews, watching interviews, special features, the full-length making-of documentary, texting 15 people the same video, the same GIF, “you have to watch this.” But this time I was not alone. It was like prayer, it was holy. Andrew Garfield said, “I think above all else, THE SOCIAL NETWORK is a love story. And something of a tragic one, I suppose.” I agree with the first part.