Our own Kevin Cookman practiced the masculine rituals of squaring off against a viral pandemic to watch the 25th James Bond movie and sitting at home eating a pizza while watching THE SOPRANOS: some may call it “going NO TIME TO DIE and THE MANY SAINTS OF NEWARK mode.” 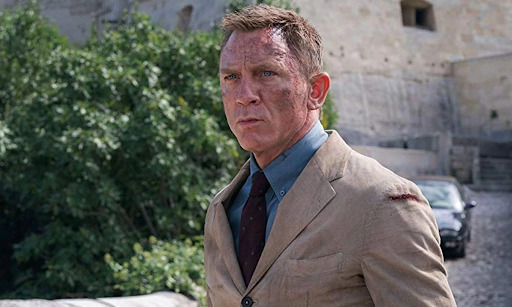 NO TIME TO DIE

Not my father, nor my grandfather, ever sat me down for a Bond as some form of hallowed tradition. So, my talk’s cheap. I have only seen eight James Bond motion pictures, and five of them are from keeping up with the Daniel Craig run to fulfill my devotion to keeping up with the next expensive, pretty thing. CASINO ROYALE is alright, I guess, and my favorite Bond is SKYFALL, largely considered the most self-loathing of the batch, and an incredible bout of action-hero misery business because of it. Enabled by his substance addictions to alcohol, adrenaline, and cum, SKYFALL pushed Craig to portray a James Bond that was consciously motivated to keep working at a government job that quite literally destroyed his body so he could subsequently enjoy hedonistically destroying his body. Mendes was never allowed to get deeper in the weeds than that, but Craig, who notoriously admits his hatred of participating in these movies, seemed to deeply relate to the arc. Controversially, Bond barely fucks in NO TIME TO DIE, but it’s not from lack of desire, rather the weaponized anti-intimacy nanobots flowing through his bloodstream that turn cinema’s stalwart of machismo into a walking bio-weapon. It’s an incredibly inspired way for this hero to go out, alone and stripped of his pleasures, until the tragic potential literally blows up in our faces.

If you’re going to force me to recall the plot of SPECTRE so you can pull some “sins of the father” bullshit and close a deathloop that’s been aching at Bond since only one movie ago, then you are not above including a nod to past Bonds, or at least the fallen Connery. It would’ve sucked, but the rest of the exhausting, wrongheaded serialization of this arc already sucked, so might as well go full hog. It’s practically a combined Daniel Craig and general IP victory lap already. From a gambling rendezvous in a Jamaican dancehall, an Arctic house invasion, CIA-backed defections to Cuba, and a Dr. Evil secret island, it’s got some of the greatest hits of England’s sweatiest spy iconography. Fukanaga, who’s been prospering in inaction while building a sterling industry reputation seemingly more for the projects that never took off than the ones that came to light, fills the frame, but he never achieves the opera of Mendes’ most intense images. It’s a TV director being visually outpaced by his television work as he captures the shots necessary to edit a trailer together, but hardly anything awe-inspiring. He forfeits the reins of crafting a distinct vision to a council that decided on script punch-ups by Phoebe Waller-Bridge you’ll want to pluck out like parsley, and an original record for the opening titles that feels more zeitgeist-baity than the usual norm for this series (I ran for a polite English tinkle during the opening credits, so I to this day have yet to listen to a Billie Eilish track in full). Most offensive by the council is the top-down optics handling of Lashana Lynch’s Nomi, the new 007 who will never ever in a bajillion years ever get her own movie despite it being dangled in her face like a carrot on a string. It’s shocking how the producers have treated this character, so unlikeable and incapable that she makes Craig’s bleary-eyed stoicism read as dashing charm. Why do her like this? The writing team isn’t incapable of spicing up the tired tropes of The Bond Girl (the regaled Ana de Armas action sequence is as gangbusters as you heard it is), so why make Nomi an insecure scrooge rather than a spirited agent who relishes in the chance to directly compete with the legend she has no personal impetus to live up to? If you’re going to make a Black woman the new 007, the most Tory franchise of all time, then at least do the virtue signaling well, you fucking dolts.

The final act is a snooze, but it’s got the alpha male visual ASMR of watching a buff Aryan Englishman competently execute a secret agent mission. The accomplishments are so anonymous, yet so slick that you forget you’re watching British colonialism at its propagandistic height. Fukanaga tries for a follow-up to his TRUE DETECTIVE and BEASTS OF NO NATION single-take tracking shots, but it’s such a meager replica of ATOMIC BLONDE’s most YouTube’d scene that it might as well have been scrapped in pre-production. It ends with one of the silliest one-liners Craig’s ever been paid to grumble. It’s a bit late in the game for the Daniel Craig films to embrace goofiness, but fine, if it means Billy Magnussen’s shit-eating scowl becomes a key plot point, and that the final clash reduces to a simple “Bond vs. The Mad Botanist” fistfight, then embrace away. I am seated in a movie theater watching one of the most costly films I have ever been marketed to see. Range Rover paid millions of dollars just so their cars could show up for a chase scene where they are completely totaled after the slightest bump. The sound is explosive, Daniel Craig seems to finally be enjoying himself, and the movie that’s long eluded dying theaters is finally available for a matinee screening at your local mega-chain dump. It makes the world feel a teeny, tiny bit more normal. The images may not be grand, but they at least loom large. 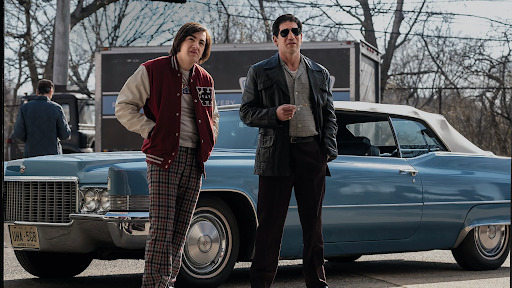 THE MANY SAINTS OF NEWARK

David Chase would rather sacrifice a first-born than return to television, but it’s clear he’s got so much swirling in his head canon, evidently too much for a single film. THE MANY SAINTS OF NEWARK, flopping in your local theater but supposedly thriving on HBO Max, is spread too thin to feel like the definitive Dicky Moltisanti mythology. It’s too sliced up to be much of anything of its own, really. It’s certainly not a fulfilling alternative history of Newark’s civil rights grievances, it’s definitely not the advertised Tony Soprano origin story, and it’s hardly Christopher Moltisanti dimly ruminating from the comfort of Hell. Instead, the film settles on a pitch deck of highlights, except only some of the narrative outcomes would ever be considered bright points. I mean, hey, some of this stuff is great. Chris is the offspring of his dad fucking his stepmom, that’s cool. Ray Liotta, who was once coveted for the role of Ralphie, plays the twin patriarchs of the entire Sopranos empire, how poetic. Tony definitely wanted to fuck his mother, yeah, that sounds about right. It still doesn’t quite justify why this film has to exist. HBO has historically been content with creating premium IPs and letting them die their earned deaths, but Warner’s most recent meddling with both the identity (if you think any HBO employee took kindly to the “HBO Max” branding conundrum, think twice) and programming has implemented some dire fucking scams that we previously thought the home box office production empire above of. We are mere calendar years away from YOUNG OMAR, likely fresh off a Sundance premiere, streaming the same weekend as the full season drop of the spin-off of the Targaryen spin-off show.

It’s been weeks of listening to people complain that this feels like a sketch, that it feels like a hollowed-out resurrection of the best television series of the 21st century. That last part’s truer than the first, but it’s also THE SOPRANOS movie. What did you expect? THE SOPRANOS has always knowingly been a caricature of itself; that performance of doomed stooges unquestioningly pledging their souls to tradition even while the pouring blood continuously proves them wrong is arguably the core text of the series. THE MANY SAINTS OF NEWARK is a cliched, dime-a-dozen, perfectly watchable gangster movie—on The Big Picture, Chase literally called his own movie “solid.” As a prequel setting the stage for why Tony and his gang dive headfirst into the valley of death, this GOODFELLAS rip-off is kind of perfect. It’s just daffy enough, just grim enough, and just light enough that you not only get a glimpse of the picture-perfect golden days they aspire to, but of the new generation of violence to come. These marinara-drowned buffoons are living for something bigger: they’re senselessly murdering in the name of THE MANY SAINTS OF NEWARK, the silly throwback movie we are all watching. I think it’s supposed to be pathetic. That awful, cheesy sequence where a teenage Tony steals an ice cream truck is enough nostalgic fuel for him to strangle 10 more nephews. It’s chilling. And it tracks! This movie is kind of bad, and it would probably be worse if it was quote-on-quote good. The final episodes of THE SOPRANOS are so harrowing, so entrenched in a jar of back-of-the-morgue formaldehyde that I’m convinced they effectively clouded so much of what defined this incredibly odd series. If the trademarks of blusterous overacting, awkward tonal failures, and dead-end narratives don’t gaba your gool, then maybe you only love parts of THE SOPRANOS.